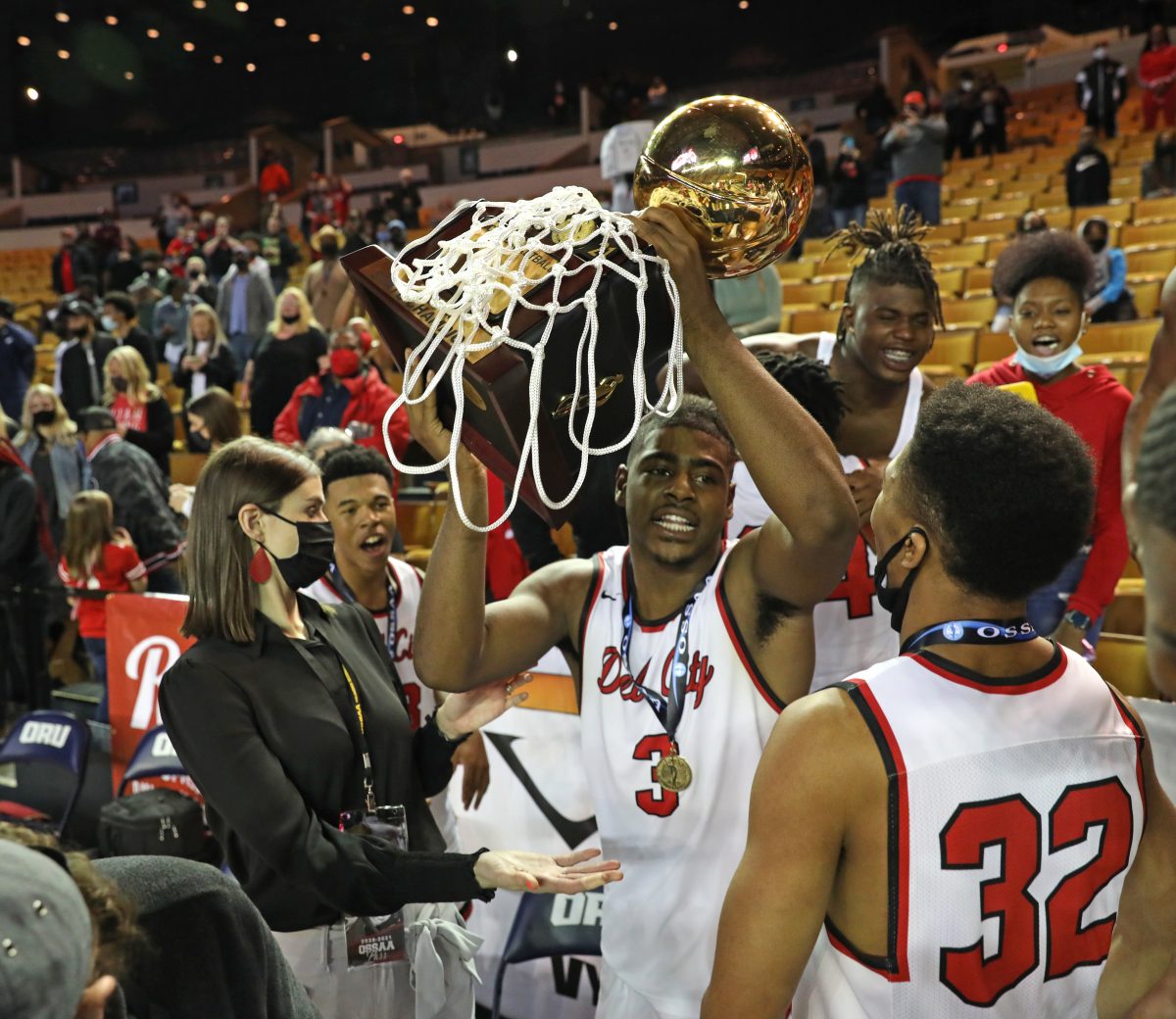 TULSA – One year made a world of difference for the Del City boys basketball team.

Last year, the No. 2 Eagles were at a low. The team saw their best chance at a state championship in four decades disappear after the state tournament was canceled due to COVID-19.

On Saturday, they were on top of the world after knocking off No. 1-ranked Edmond Memorial 47-44 in the Class 6A boys basketball state championship at the Mabee Center.

“Not being able to play hurt so much,” said senior Keyondre Young. “I knew we had to win it for my guys last year. We had to get it done.”

Young delivered with 26 points and 9 rebounds, including 18 points in the second half. The Valparaiso signee showed his ability to drive the lane and shoot from the perimeter, where he hit 4-of-8 3-point attempts.

“He just came out with a fire in his eye and the will to win,” said coach Lenny Hatchett. “When he has that fill and fight, those other guys will follow through and believe in him.”

The two top teams in 6A battled all night as momentum and the lead swung from quarter to quarter.

Del City trailed for much of the fourth quarter until Javeon McCallister hit a layup with 30 seconds remaining, giving Del City a 45-44 lead.

Memorial standout Sean Padulla looked to put his team back in front when he drove the lane with 10 seconds remaining, but his layup was off the mark. McCallister and Padulla both got a hand on the rebound and the Eagles were awarded possession on a jump ball.

Sherrod Davis was fouled and hit two free throws to make it a 47-44 lead with 5.9 seconds left.

Memorial raced down the court on the final possession but Padulla’s running 3-point shot bounced off the backboard, sparking euphoria on the Del City bench.

“This is huge for our community and our school,” said Hatchett. “It’s been over 40 years since we won a state championship, and I couldn’t be prouder of our guys.”

Del City’s only other state championship came in 1980.

The Eagles overcame hurdles early in the season. Del City had been one of the top 5A schools the past few years but moved back to 6A this season. They also lost standouts Nate Goodlow and Demontrael Crutchfield to graduation.

The team started the year 6-4 and lost to Memorial in the Bishop McGuinness Classic on Jan. 9. They turned things around and won their final 16 games of the season.

“A lot of people doubted us after we lost Nate (Goodlow) and Demontrael (Crutchfield), but we proved we were the same team,” Davis said. “We have a lot of sophomores on our team and coach Hatchett got us together as a team.”

In the championship, the Eagles came out of the gate firing as they built an early 16-9 lead in the first quarter.

Memorial responded with a big second quarter. JV Seat tied the game with a conventional three-point play and Sean Padulla pushed over the top with a basket with two minutes left. Del City made only two field goals in the period and trailed 25-21 at halftime.

Momentum swung back towards the Eagles in the third. Young scored nine points in the period, helping Del City regain the lead at 34-29.

But once again, Memorial responded in the fourth. The Bulldogs led for much of the final period until McCallister’s go-ahead basket with 30 seconds remaining.

McCallister finished with 9 points and 4 assists for the Eagles.

Del City beat Edmond Santa Fe 52-36 in the first round of the state tournament on Thursday. They followed with a 55-44 win over Putnam City North Friday in the semifinals.