Brown to return to Pentagon 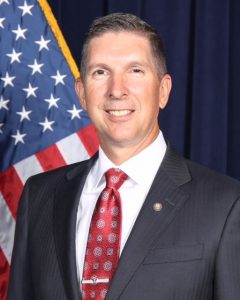 After four years at the helm of the City of Choctaw, Brown is returning to Washington D.C.

Brown has been selected to lead the Business Resale Policy Division under the Deputy Assistant Secretary of Defense for Military Community and Family Policy.

While Brown transitions back to the Pentagon, city treasurer Tracy Burton will serve as interim city manager until the council approves a permanent replacement.

The official announcement came at the end of the March 16 regular City Council meeting.

“It has been an honor and privilege to work with Ed. We are excited for you as you move into this new role,” said mayor Randy Ross.
Brown officially began work for the City of Choctaw in late February of 2017.

Prior to relocating to Choctaw, he was Director for the Non-medical Counseling Program Office for Military Community and Family Policy, Office of the Secretary of Defense. As director, Mr. Brown was responsible for the leadership, management and oversight of two centrally funded Department of Defense multimillion dollar programs — Military OneSource and Military and Family

Life Counseling. Non-medical counseling is confidential, short-term counseling designed to address a range of concerns that may detract from military and family readiness. Before that, he culminated a 28-year Air Force career, retiring as a colonel from the Director of Resources and Requirements Division at Headquarters Air Force Services.

While the city begins a search for the next city manager, the City Council could see some changes as voters will weigh in on three of seven leadership seats in an April 6 election.

For more about the City of Choctaw city manager and municipal government visit the city website.