Residents of Choctaw from three city wards will head to the polls April 6 to elect their City Council representative.

The city’s most contested municipal election in recent history had a total of eight candidates file for the three positions.

Challengers have been campaigning on change, while incumbents have asked resident to look at progress already made. 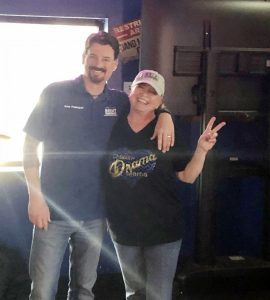 Ward 6 will have new representation as Dale Gill is set to vacate the seat leaving it to one of three candidates. Donald Judson, 38, Sean Lynch, 51, and Rick Modisette, 67, are all competing for votes in that ward.

The Council meets publicly on the first and third Tuesday of each month at 7 p.m.

The election is set for April 6. Polls are open 7 a.m. to 7 p.m. For your voting details visit OKVoterPortal

Among his accomplishments, is promoting and expanding transparency in city government.

He has hosted six town hall meetings during his time in office, and he plans to continue working for expanding the communication between citizens and the city.

“Four years ago, when I set out on this journey as your Ward 2 City Councilman, I wanted to encourage all citizens to be involved in their city government. I made a pledge then to make sure I was available at all times to discuss issues, votes and matters of importance to my fellow neighbors,” said Birdsong.

“I have honored that pledge. I ask for your support again on April 6th. Just like the previous four years, in the next term, I will serve your public trust with honesty, fairness, and integrity. I will continue listening to your concerns, issues, and ideas. As neighbors, we can work together to make Choctaw an even greater place to live.” 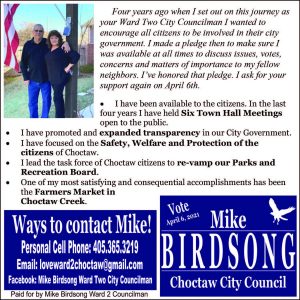 Brent Pendergraft is challenging the incumbent for the Ward 2 seat.

“My family and I have lived in Choctaw for 15 years. I have been involved in the community for everyone of those years,” said Pendergraft, who owns a tree service company headquartered in Choctaw.

He prides himself on serving the community through a variety of volunteer positions including the Boy Scouts of America, Rotary Club of East Oklahoma County, coaching little league basketball, and serving on the city’s park and recreation advisory board. Now he’s ready to put in more work as a City Councilman.

“I have coached or assisted my three kids basketball teams. I was a leader in the Boy Scouts of America for over 16 years. I retired as Scoutmaster after helping to grow 20 plus local Eagle Scouts. If you have been out in Choctaw you have seen many of these outstanding youths’ projects. I took on the role of Vice Chair of the Public Recreation Advisory Board and currently hold that position. I am also a member of the Eastern Oklahoma Rotary Club. I have a senior and freshman at the high school that are extremely active with band, tennis, STEM, and the Bio Med program. I am also a local small business owner. I own Arbor Scapes Tree Service Inc.”

Pendergraft has campaigned on his “start small, finish big” philosophy and responsible business practices he’s used to grow his local business from a humble one man and a truck operation to one of the metro area’s premier tree service companies headquartered at SE 29th Street and Choctaw Road.

“They say if you don’t grow you die and I agree with that to a certain point. I believe in small government and the right for people to live their lives as they choose within the boundaries of the law,” said Pendergraft. “I believe in listening more than talking and that clear communication is critical for both sides of any conversation. I see great things happening in our community and would be grateful if I have the opportunity to represent my neighbors here in Ward 2!” 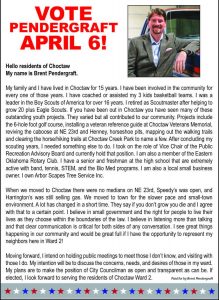 Art Sipes will appear on the ballot, but has announced his endorsement of Morris.

He says after an hour-long phone call he decided she would be a great fit for Ward 4, but missed the deadline to have his name removed from the ballot.  .

Morris has been active on the campaign trail focused on improving communication between residents and the city.

“Communication is key. I’ve got more time than money, and I’m ready to put in the work,” said Morris.

She’s had a long career in technology and contracting with the federal government, and believes she has the ability to improve the city’s preparedness and communication with residents.

“I plan. That’s what I do. I can be wrong, I’m allowed to have errors, but I’m not allowed to come unprepared,” said Morris. “That’s one of my biggest frustrations with the city. They constantly seem unprepared.”

She’s been an active volunteer and advocate for Choctaw-Nicoma Park soccer for years and is motivated to improve the state of Choctaw’s parks for all residents.

“I want to see people on the City Council that look like me. People that have kids going to school here, they go to the events and get out and see people instead of looking through them,” said Morris. “This is ‘Team Choctaw.’”

Morris has been campaigning through the community in an effort to boost voting numbers.

Choctaw Vice Mayor Roger Malone will be completing his fifth term as City Councilman in April.

In the last election Malone defeated Missy Jennings and Sipes, capturing 54.97 percent of the vote.

He believes residents have benefited greatly from the work he and other city leaders have done over the last 20 years.

“It is of the utmost importance that you are represented by an individual with common sense, wisdom and integrity. I have proven to be that person,” said Malone. “You are just now seeing the results of many years of hard work that I and the council have done.”

Choctaw’s Ward 6 will have new representation.

Lifelong Choctaw resident and longtime coach and educator Rick Modisette is putting his hat in the ring.

“Over the years I have listened to people’s complaints about our city government and understand their concerns and have some of my own. I can guarantee you I have the best interest of Choctaw and the citizens of Choctaw at heart,” said Modisette.

“From my days of teaching American Government one of the most important political issues I tried to stress to my students was the right to vote. Free and fair elections are the foundation of every healthy democracy, making sure the government’s authority comes from the will of the people,” said Modisette. “Voting is not only a right but a responsibility of the citizens to participate in elections.” 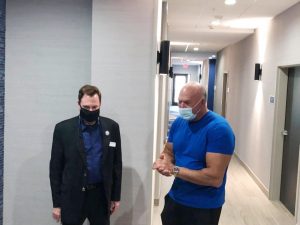 “I am not a politician. However, like most of you, given the current political climate these days politics and politicians are all too often surrounding us in our day-to-day lives. As such, I recently came to the realization that most politicians do not have our best interests at heart and as voters we are too often left behind on a trail of empty campaign promises with nowhere to turn,” noted Lynch who plans to give all residents of Choctaw equal and proper representation.

Donald Judson offers an outside perspective compared to the other longtime residents seeking the Ward 6 seat.

“People have asked me what makes me different from other candidates. Well first I’m not originally from here so an outside look and ideas are a given,” wrote Judson who grew up in a much smaller community.

“My small-town mentality accompanied with my formal education and training dealing with all things contracts related sets me apart. I believe in real life education that teaches our youth to be great adults. I believe small business is what makes a town great for all. I believe in infrastructure not just in roads and bridges, but teaching our youth about basic city needs and how to achieve them.”

He believes he could successfully represent his ward in a time where different areas of the city want and need different things.

“Now more than ever we need people that represent our individual parts of town (Wards). People that make decisions based on what the people of that Ward want, not what officials feel is best for all without the public’s consideration,” noted Judson.

The election is set for April 6. Polls are open 7 a.m. to 7 p.m. For your voting details visit OKVoterPortal