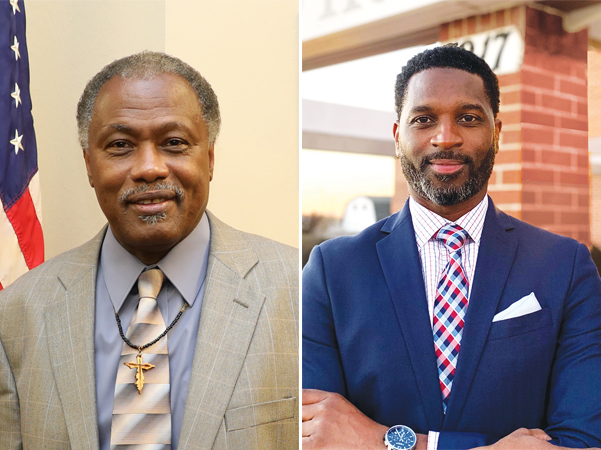 Nathan McGuire and Ed Daniel are running for the Mid-Del School Board Office No. 1 seat. (Photos provided)

Voters will head to the polls Tuesday in a Mid-Del School Board election.

Incumbent Nathan McGuire and Ed Daniel are seeking the Office No. 1 seat on the board of education. The winner will receive a five-year term on the board. Office No. 1 represents much of Del City and Forest Park.

McGuire, 70, is a longtime Del City resident and former educator. He has served on the board since October 2019 when he was appointed to replace David Bibens who resigned after moving out of the district.

Daniel, 48, of Forest Park, is a father of five Mid-Del students and works as an electrical engineer in the aerospace industry.
This will be Mid-Del’s first contested school board election since 2007. In that election, Tim Blanton defeated Sheree Martin to win a seat on the board. Candidates have run unopposed in every election since that time.

McGuire says he has enjoyed serving on the board during what has been a difficult time for public education. He’s been impressed with the way school leaders, parents, teachers and students have handled the challenges of the pandemic.

“I think we’ve handled COVID-19 probably as well as any school district I can think of,” McGuire said. “That’s not to say we haven’t had any challenges because we’ve had some great challenges that have divided even us. But our communities and schools seem to have pulled together during this time.”
The decision to seek a full term on the board was an easy one.

“Mid-Del has been very good to me and I want to give back,” he said. “I was lucky that they hired me as a teacher and coach in 1974. And now I have four grandchildren in the school system and I want to stay involved.”

McGuire says he leans on his experience and roots in the community to best serve the district.

“I have firsthand knowledge of how schools work and feel like I’m plugged into the community,” he said.

McGuire graduated from Oklahoma Baptist University in 1974, where he was also a standout basketball player. That same year, he got his first teaching job with Mid-Del Schools. He taught and coached basketball at Del City High School. He was an assistant when the Eagles won the state championship in 1980.

After 16 years in the classroom, McGuire transitioned to school administration. In 1990, he left to become an assistant principal in Clinton. He later served in the same role at Western Heights for two years before becoming principal at Millwood from 1996 until he retired in 2003.

McGuire also served in the U.S. Air Force Reserves for 33 years, retiring in 2010 as Chief Master Sgt. for the 507 Air Refueling Wing/72nd Aerial Port Squadron.
McGuire and his wife have three children and eight grandchildren, including four who attend Mid-Del Schools.

As a parent of five children, Daniel says he has a great appreciation and interest in the Mid-Del School District and a desire to give back.

“I’ve always had a priority for kids and education and have had a lot of great teachers and people along the way who have invested in me and encouraged. And I always want to give back,” he said.
Daniel says he would bring a diverse perspective to the school board.

“Having not been a part of the education system, I bring a diverse point of view and can think outside of the box. I have a good mixture of experience. And I know what skills are necessary for kids who want to get ready for their careers or college.”

“A lot of people are aware of the racial inequalities because the tragedies of last summer have come to light,” he said. “I’ve always been an advocate of diversity and equity.”
Daniel says the district needs to take extra care as they deal with the aftermath of the pandemic.

“A lot of kids are suffering academically with online schools and I have heard that students are falling behind and not doing their lessons or logging on,” he said. “And even in the households, there’s the emotional aspect with isolation. We have to be ready to deal with that. We need to know how we can recover students and how we can deal with the emotional aspect of isolation and family dynamic that has been challenged.”

Daniel grew up in Michigan and moved to Oklahoma after high school to attend Spartan College of Aeronautics and Technology in Tulsa. He later studied at Tulsa Community College and eventually Oklahoma State University where he earned a bachelors, masters and doctorate in electrical engineering.

He serves as a member of the OSU Electrical Engineering Industry Advisory Board, providing counsel to university faculty on education needs of the industry, university curriculum, initiatives and strategic plans that prepare students for the workforce.

His career has been primarily focused on the aerospace industry. Daniel worked in Los Angeles for several years in aerospace and satellite communication before returning to Oklahoma about 15 years ago.

He and his wife have raised their children in Forest Park. Their oldest daughter will graduate from college this year. They have two children in high school, one in middle school and their youngest is a fourth-grader.