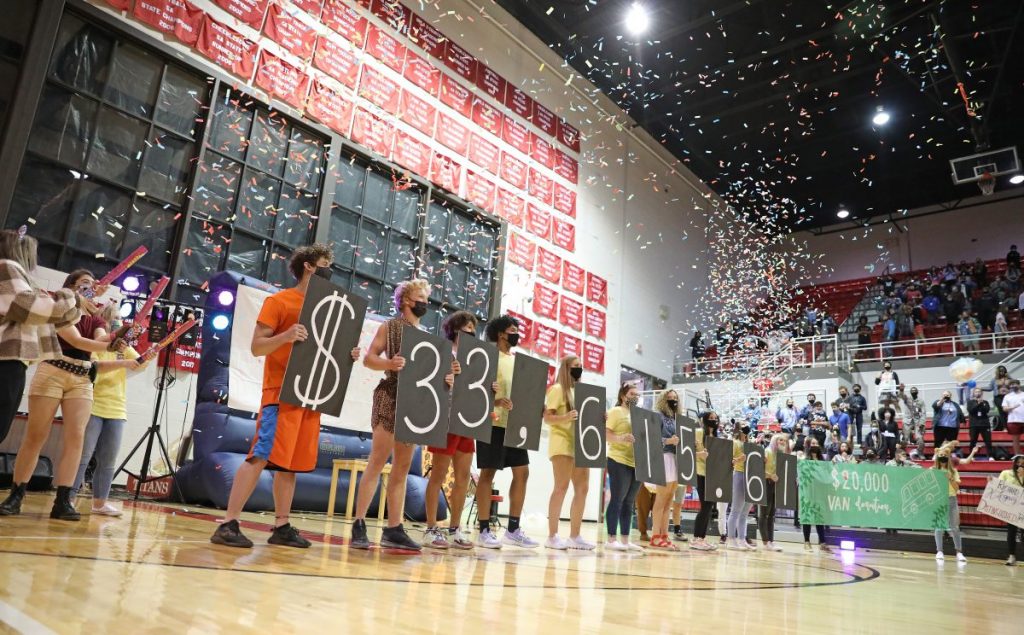 Students at Carl Albert High School unveil their fundraising total from SWAG Week during an assembly on April 12. Photo by Jeff Harrison

Students at Carl Albert High School were ready to kick off their annual SWAG Week last year when the coronavirus pandemic stopped everything.

Plans to help a local girl, who is battling a rare genetic disorder, during the philanthropy week were put on hold indefinitely.

Students capped SWAG Week with a closing assembly and reveal ceremony. At the end of the program students lined up and unveiled cards with the total of $33,615.51. They continued to receive donations later that week bringing the total to $36,724.86 as of Friday, April 16. 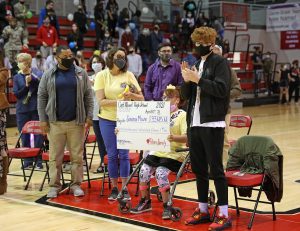 Savina Muse with her family at the SWAG final assembly. (Photo by Jeff Harrison)

Savina attended the assembly with her mother Sabra and brother Syruss Riekena who graduated from Carl Albert last year. They expressed their appreciation for the support.

“I don’t know if you guys realize how much of a blessing each and every one of you are to her,” Syruss said. “Thank you.”

Students raised money through a variety of fundraiser events, sales and donations. Some of the most popular included Bingo, a color run, move night, home run derby, and the powder puff football game. They sold t-shirts and masks.

Fundraising during a pandemic was challenging for the students. They had to follow CDC guidelines for COVID-19. And they were not able to coordinate with students at Carl Albert Middle School and local elementary schools for fundraisers.

“We had to get really creative and have a lot of social distancing at the events,” said Reagan Cook, a senior at Carl Albert. “We had a lot of outdoor events and did Bingo at the fieldhouse. Everyone was spaced out but it was great to see everyone together and laughing. This year has been pretty dull for students, so it was pretty cool to see them all come together.”

Fellow senior Max Wolfley said the color run was one of his favorite events. He said the event provided a change of pace and sense of normalcy.

“It was a good feeling just having fun and being together outside,” he said.

Wolfley said their passion for SWAG Week only grew over the last year.

“I think we really built up an emotional attachment over the year since we weren’t able to provide for Savina,” he said. “It made it a lot more emotional when we finally got the money for her.”

In addition to the SWAG total, the Muse family also received a wheelchair accessible van. The vehicle was donated by the family of a past SWAG recipient Troyan McCollum who passed away in November 2019 following a battle with ALS.

“One of the biggest priorities was to get a wheelchair accessible van and we were crushed that we couldn’t do it last year,” said Grace Dozier, teacher and SWAG Week sponsor. “That was until a former recipient donated it.”

The donation follows a tradition of giving back. Richard Morris, a former Carl Albert teacher and SWAG recipient, donated to the cause every year until he passed away in August. His family continued the tradition this year.

In honor of Morris’ generosity, the school started an annual award in his honor. The first recipient was Troy McCollum, the husband of Troyan.

“Thank you for what you’ve done for all of us and thank you for the example that you set for us,” said principal Kristin Goggans.

Savina has Wieacker Wolff syndrome, a very rare, slowly progressive, genetic disorder. She is one of only 17 females to have been diagnosed with the condition. It is more common among males.