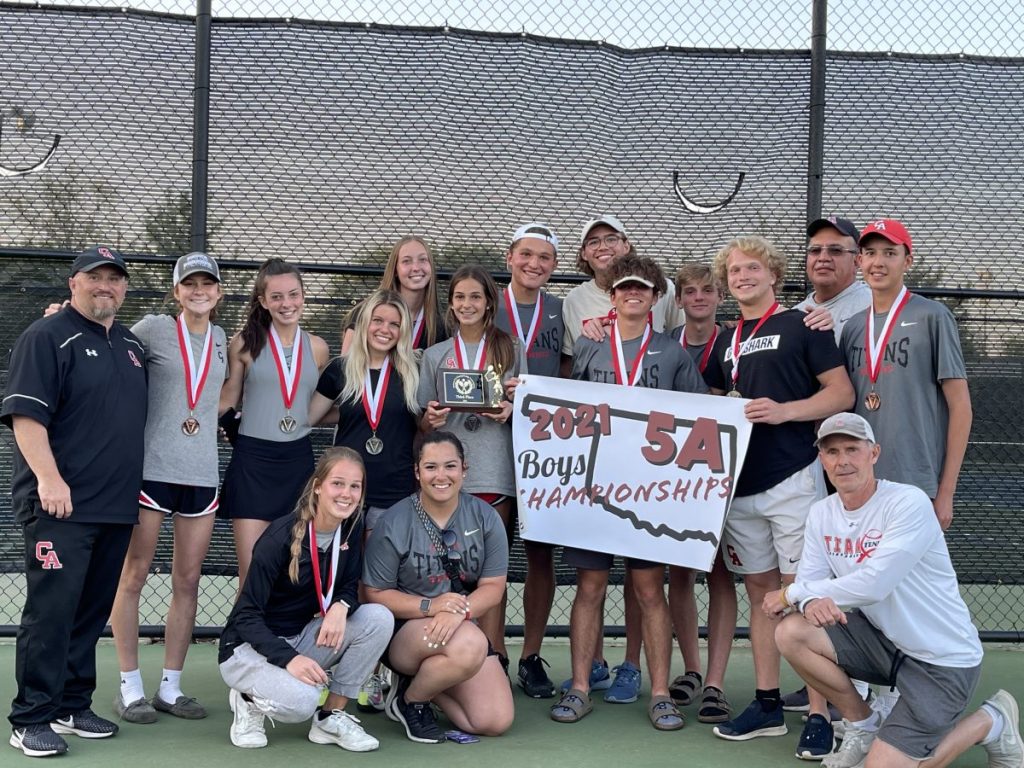 The Carl Albert boys tied for first place at the 5A Championship Tournament and the girls placed third last Saturday in Duncan. (Photo provided)

The Carl Albert tennis teams held their own last weekend against some of the top public schools in the state.

The boys tied for first place last Saturday at the 5A Championship Tournament in Duncan, and the girls team finished in third place.

Carl Albert won two of the positions in the boys’ tournament. Jordan Brown (No. 2 singles) and Jackson Bales and Ben Sutterfield (No. 2 doubles) each took first place.

The No. 1 doubles team of Angel Cervantes and Jared Stewart finished third, and Grayson Guild was sixth at No. 1 singles.

Carl Albert, which was without starters Keegan McLaughlin and Tyler Shaw, and Duncan both finished with 27 team points.

“We had some other guys filling in and they did a good job for us,” said coach Shane Farley. “That’s the good thing about our team We’re good enough that we can play some different combinations in doubles.”

In the girls’ competition, Carl Albert advanced to the finals in all but one of the positions but finished runner-up each time.

Mabyn Shuffield placed second at No. 1 singles. She lost to Shawnee’s Olivia Stobbe in a three-set finals match.

Sisters Brylee and Kaylee Toney were runner-up in No. 1 doubles. They beat Ardmore and Guthrie but fell to Duncan in the championships 6-2, 6-5.

The No. 2 doubles team of Maddie Bigger and Ashton Bryant took second to Ada. They beat Duncan and Shawnee but came up short against Ada, losing 6-2, 6-2.

Carl Albert will conclude the regular season with the Shawnee Tournament. The girls play on Friday and the boys on Saturday.