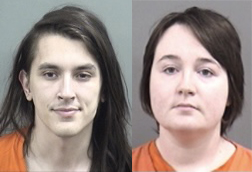 Tuttle Police Officers Lanier, Buckles, and Riley responded to a report of domestic abuse Wednesday, April 21 shortly after midnight.
When they arrived, Officer Lanier spoke with Carol Farmer, who said that her and her father, Michael Herman, had gotten into an argument over the thermostat in the residence.
Farmer said that during the argument, Herman had punched her in the mouth. According to an officer’s report, Farmer appeared to have no injury to her mouth. Farmer then said that Herman and her boyfriend, Ryan Freeman, had also been fighting in the residence. She said that Herman tried to strangle Ryan with a baseball bat.
Farmer said Ryan, “began to turn blue”, so she struck Herman in the face with a vacuum cleaner. Farmer also stated that the fight took place in her bedroom where her son was in his play pen.
Officer Lanier asked Farmer where the vacuum was and she said it was black in color and was in the bedroom. The vacuum had blood stains on the handle and the bat was hidden under the bed. Both the vacuum and bat were seized as evidence.
Officer Lanier spoke with Herman. Herman had an obvious cut to his forehead and nose, and his face and hands were covered in blood. Herman’s nose also appeared swollen and crooked. Tuttle EMS was dispatched to the residence so Herman’s injuries could be treated.
Officer Lanier then talked to Freeman who said he had been living with Herman and Farmer for about 4 months. Freeman said the argument began because he believed Herman had stolen $20 worth of marijuana from him.
He said when he confronted Herman they began, “going at it.”
Freeman said Herman grabbed a baseball bat and pushed him into the closet, breaking the door. Freeman said Herman was trying to choke Freeman with the bat. Freeman was looked at for injuries and there were no scratches, bruises, swelling, or marks of any kind on Freeman’s neck. Freeman had a cut on the knuckles of his right hand that was believed to be caused by punching Herman.
It was later seen that the closet door in Freeman’s room was, in fact, broken. Farmer’s child was also standing in his play pen and had no signs of injury. Officer Lanier put Freeman into investigative detention and put him in the backseat of his patrol car so he could interview Herman.
Officer Lanier spoke to Herman who said Freeman accused him of stealing some stuff from him. Herman said he did not steal anything and when he denied it, Freeman ran at him. Herman said he tried to avoid being grabbed by Freeman, but was unsuccessful. Herman said Freeman had the baseball bat and used it to push him into the closet door which caused it to break.
Herman said he then pushed past Freeman to get away.
Herman said he was followed into the room by Freeman and Farmer. Herman told me he was knocked to the ground and Freeman pinned him down with the baseball bat. Herman said while he was pinned to the ground by Freeman, Farmer hit Herman in the face with the vacuum.
There was a large pool of blood on the floor of Herman’s room caused by the severe laceration to his forehead, along with blood drops on Herman’s bed and along the carpet leading into the living room.
Officer Lanier arrested both Freeman and Farmer for Domestic Abuse in the Presence of a Minor.
Farmer was also arrested for Assault and Battery with a Dangerous Weapon. Both were handcuffed and searched incident to arrest. Freeman was sat in the backseat of Officer Lanier’s patrol car and Farmer in Officer Buckle’s patrol car. Officer Lanier then contacted a DHS Child Welfare Specialist who arrived at the residence and took custody of the child. Officer Buckles and Officer Lanier then transported Freeman and Farmer to the Grady County Jail. 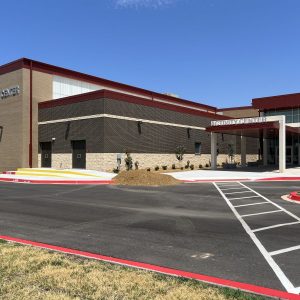