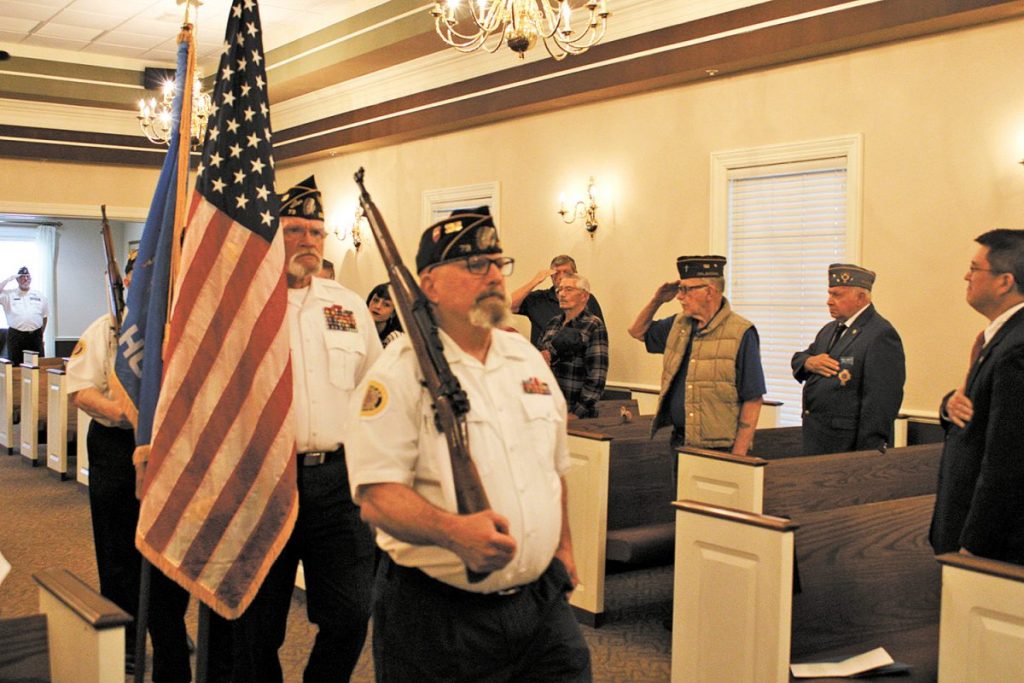 On the 150th Memorial Day, Del City’s Veterans of Foreign Wars Post 9969 and American Legion Post 73, held their annual Memorial Day ceremony at Sunnylane Cemetery. Due to the rainy weather, the ceremony was held in the chapel at Sunnylane. Normally the ceremony takes place at the Veterans Memorial in Sunnylane. This year’s keynote speaker was State Rep. Andy Fugate.

The Master of Ceremonies was VFW Post 9969 Commander Robert W. Kellington. Kellington began the ceremony by welcoming all those present and all veterans who have served in the United States Military.

“I would like to thank the brave men and women who have made the ultimate sacrifice. Let us remember those who courageously gave their lives. Let’s use today to count our blessings and stand proud,” said Kellington.

After Kellington’s opening remarks, members of the American Legion and VFW color guard posted the colors. The opening prayer was by Chaplain Bob Lambert. Local signer John Eads performed a heartfelt and beautiful rendition of the National Anthem. 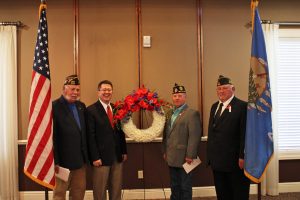 VFW Post 9969 Senior Vice Commander Gary Grantham proclaimed General Order #11. General Order #11 is the federal order that in 1868 created what is now know as Memorial Day. Representative Fugate followed up with a brief but heartfelt speech. Recognizing the sacrifices veterans and their families make every day. The speech also highlighted the divisiveness of our country at the current moment but optimism that we will come together and heal.

“It is a privilege to speak this morning to remember, and to honor, those who have paid the ultimate sacrifice. As I thought about this morning and why we gather today, I was reminded of my unworthiness. I have not served. I have never put country above self, never put my life and my family on hold, I have never given everything, as so many of you have,” Fugate said. “As the son of someone who did serve his country and retired honorably, know that I am and will ever be eternally grateful to all who serve, and I will mourn and grieve with those families who know firsthand that freedom is not free. It is purchased with the blood of men and women, sons and daughters, husbands, wives, fathers, mothers, brothers, and sisters. Patriot who stepped to the front and said, ‘I will go’.”

Due to the rain, the wreaths had been placed at the Del City Veterans Memorial before the ceremony and the 21 gun salute was cancelled. This year 5,000 American flags were placed at Sunnylane.

The playing of Taps and a closing prayer by Lambert ended the ceremony.