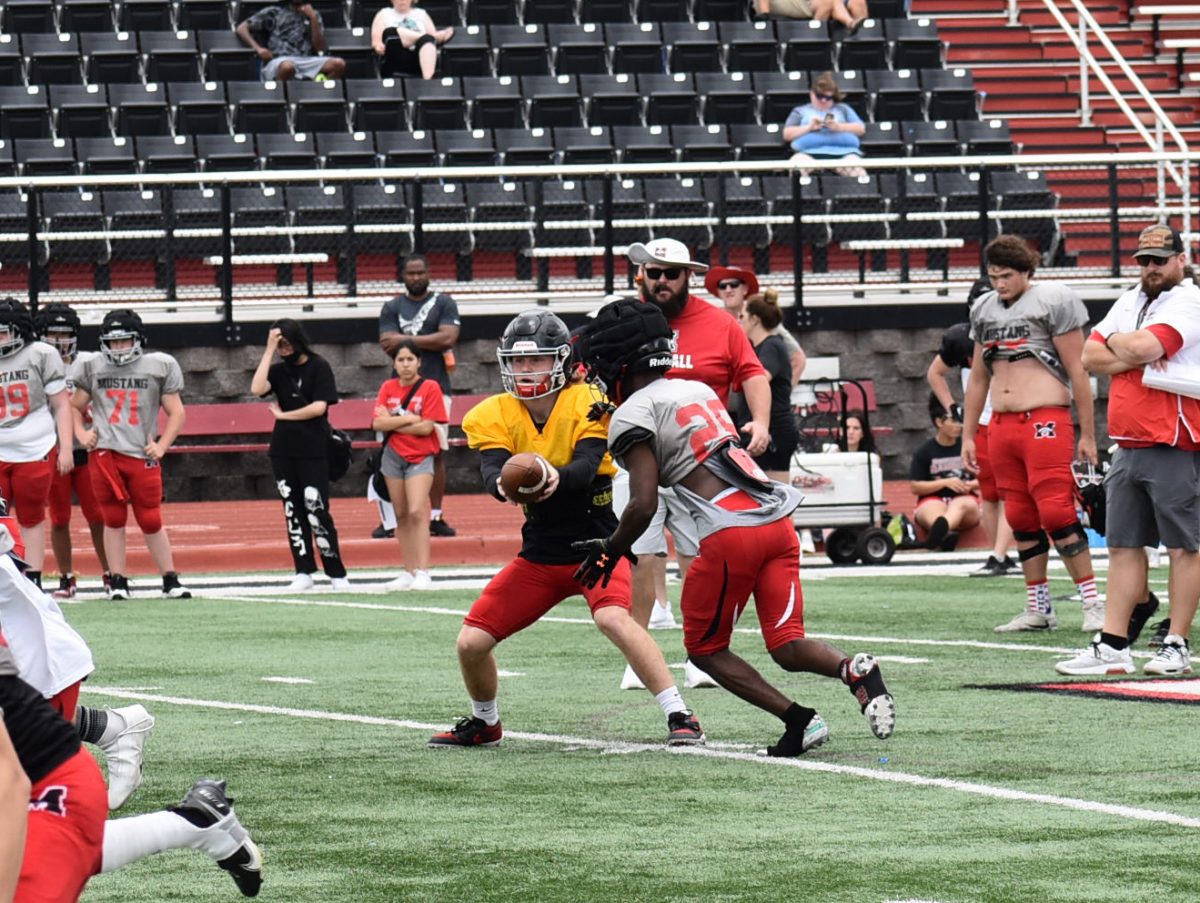 Mustang quarterback Tristen Russell hands off to a running back last week during a team camp at Bronco Stadium. (Photo by Kale Fouts)

The Mustang Football team started their spring practices on May 18, and wrapped sessions Wednesday. Last Tuesday and Wednesday they also hosted a team camp as well. On Tuesday the camp went as planned, lasting from 2pm-5:30pm, but inclimate weather on Wednesday caused the start time to be moved to 1pm. Yukon, Westmoore, Putnam City, Del City, Lawton MacArthur, Tulsa McClain and Woodward were the other teams that competed at the camp.

Coach Lee Blankenship mentioned how his team is loaded on both sides of the ball this season, and Bronco fans should look forward to a very successful season this fall.
On the offensive side of the ball, returning starting quarterback Tristen Russell was the first player that Blankenship talked about.

“Tristen has looked very good this spring. He has spent a ton of time this offseason working on his quarterback mechanics. Last year he was mainly just an athlete back there for us. He really didn’t have much experience at quarterback going into last year. With that said he still had a great year, and I know he will have a much improved season this year,”said Blankenship.

Another offensive player that Blankenship spoke highly of was wide receiver Keegan Bass.

“Keegan was forced into playing time as an X receiver last season, but this year he moved into the slot. I’m very fired up about him. He has played better than anyone, and I think he is our MVP for the spring,” said Blankenship.

Jacobe Johnson is currently ranked as the second best athlete in the state of Oklahoma for the class of 2023, and he holds offers from ten division one schools. Jacobe is a jack of all trades as he plays both sides of the ball for the Broncos. He plays running back, receiver, corner, and safety.

“He’s the only player on our team that will play both sides of the ball. We will play him anywhere that we need to, and use him to win games. He plays basketball as well for us. He’s just an elite athlete,”said Blankenship.

Blankenship also spoke about what he thinks of how his defense played this spring.

“Senior Inside Linebacker Kale White has had a very good spring for us. He’s extremely physical and he gives his all every single play,” said Blankenship.

Another defensive player that Blankenship talked about was outside linebacker Taesyn White. His dad, Jeremy White, played linebacker at Rice, and he is now our special teams coordinator.

“Taesyn has done extremely well this spring. He is stepping into a very important role this next season, and I expect him to be a leader for us,” said Blankenship.

“Honestly seeing our guys compete is amazing. Last year we were unable to have a spring so the fact we are able to play is awesome. We had a lot of high energy practices this spring, and both sides of the ball played tremendously well. I’m very excited to see what they do in the fall,” said Blankenship.