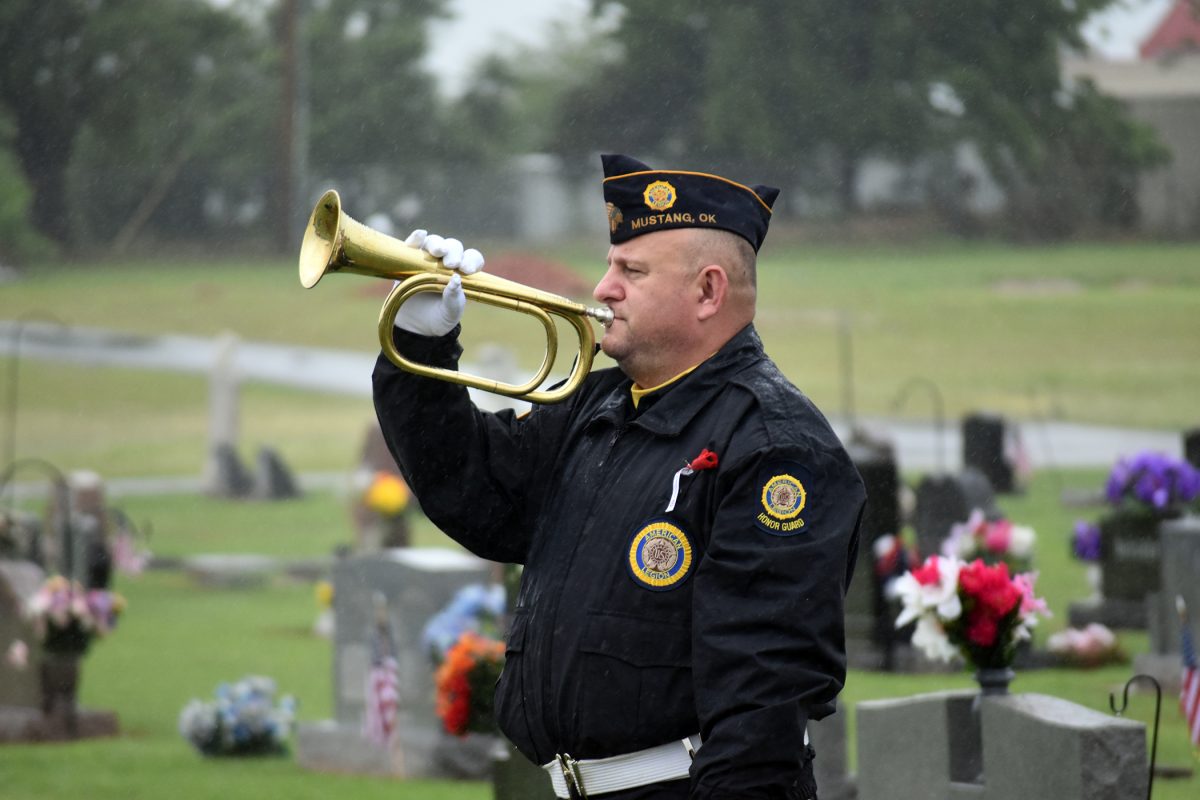 It seemed as if the heavens themselves wept for the fallen Monday, as Mustang American Legion Post 353 celebrated the lives and honored the sacrifices of those who have made the ultimate sacrifice for their country.

“Today we honor the men and women who grew up in the light and who willingly left that light to go into the darkness to protect it,” Memorial Day ceremony guest speaker Cord Fowler said. 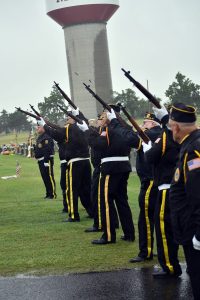 Mustang American Legion Post 353 gathered Monday for its annual Memorial Day ceremony at Mustang Cemetery to remember those who made the ultimate sacrifice for their country. (Photo by Traci Chapman)

“They are men and women who made the ultimate sacrifice to allow us to live in the light today.”

They were words spoken during the post’s annual Memorial Day remembrance, this year one conducted in a pouring rain and, at times, howling winds that seemed to provide a backdrop to a loss remembered at this time each year.

It was also a time to remember those still missing in action, as well as those who did come back but who suffered in the service of their country physical or emotional wounds – or both – that forever changed them.

The sacrifices of those honored on Memorial Day

The history of Memorial Day has been a way to thank those who chose to put themselves in harm’s way for something better. It’s something that goes back to the battlefields of the Civil War, to World Wars I and II, Vietnam, the gulf wars and more, officials said. It’s an enduring message of loss and honor – but also of love and hope, and it’s something Mustang Legionnaires and their comrades hold on to, Bishop said.

That spirit of hope is a reason why American Legion members hold as their symbol the red poppy, a flower that came to mean so much during World War I, when a First Brigade Canadian Field Artillery doctor, John McCrae, was called upon to preside over the grave of his friend, Lt. Alexis Helmer. It was there, on the banks of the Ypres-Yser canal Helmer was laid to rest May 2, 1915. It was a gravesite McCrae told some struck him because of the bright red poppies growing amongst the graves. That story is remembered each Memorial Day with the reciting of McRae’s poem, In Flanders Fields.

Members also conducted a service at Red Hill Cemetery, as well as placing flags on veterans’ graves at Mustang Cemetery. Identifying those graves remains a top priority for Legionnaires in a program headed up by post finance officer and former commander John Bishop. It’s an effort the Legion hopes could be expanded with the help of the community, Bishop said.

“As always, we try to recognize all our deceased veterans, not just the ones that died in our wars,” he said. “There are many gravestones that give no indication of veteran status and get passed by; those we discover, we honor, but we would appreciate assistance in identifying the others that served our country in war, in peace, in any of the five branches, whether active duty or reserve.
“We are all one, all having taken the oath to defend the United States of America,” Bishop said.

Anyone wishing to contact the Legion concerning grave markers can do so by calling Bishop at 405-414-2515 or via email at jbishop22@cox.net.

Mustang Post 353 has restarted its regular monthly meetings at 7 p.m. the second Thursday of each month at Mustang Senior Center, after a lull necessitated by safety concerns surrounding the novel coronavirus.