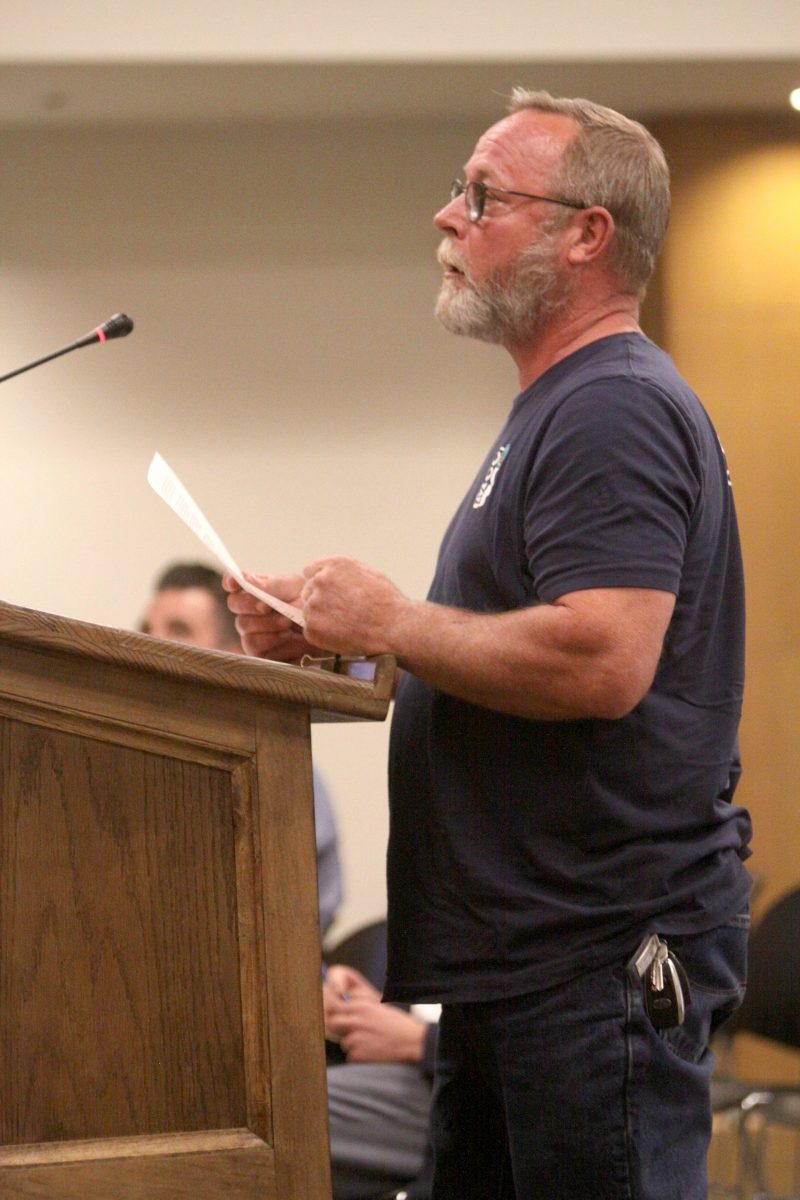 Jeff Nett speaks against the special use permit requested by Citizen Energy Monday at the City of Tuttle’s regularly scheduled planning commission meeting.

The Tuttle Planning Commission handled several items Monday before finding contention with a request from Citizen Energy for a specific use permit to drill five oil wells, to be located at the southeast corner of the intersection located at East Silver City Ridge and North Sara Road.

More than a half dozen citizens spoke against the SUP, citing noise pollution, light pollution, concern for wildlife, roadway damage, roadway safety, and more. There were more than that in attendance.

Tuttle citizen Preston Paul was one of many who spoke at the meeting, saying, “Citizens has four other pad sites that are close to that property. They have two that are to the east of there. If they want to put that over the half-mile line, that is right behind several houses, about 30 neighbors. I have five or six neighbors here tonight who are very unhappy with the situation.”

Representatives with Citizen Energy were yet to provide a driveway permit, which is required.

The company will also be required to work with City Engineer Sean Fairbairn on floodplain regulations, which Citizen had failed to do thus far.

Some of the city’s department heads made suggestions in their reports to the planning commission members, including Public Works Director Aaron Slattery, Tuttle Police Chief Don Cluck, and Tuttle Fire Chief Ryan Allen.

Slattery recommended allowing the site’s traffic to use Silver City Ridge, coming off of Highway 4, to make it to the location. He also suggested that Citizen Energy put up their own signs at Highway 4, Silver City Ridge, and at the entrance to the location, so that trucks knew which routes to use. He also suggested the oil company put up signs warning of truck traffic. The public works director also suggested that Citizen Energy be responsible for cleaning any dirt, rocks, mud, or debris from the public roadway in front of the location.  Citizen Engergy announced during the meeting they will be accessing Morgan Rd instead of Sara Rd.  In response to this change, staff will need to re-examine the recommended travel path from the state highway system.

Chief Allen took issue with the usage of a private bridge.

In relation to the damage that has been done to the roadways, City Manager Tim Young said, “When it comes to the condition of the road, it is likely going to tear up the road. We are already weekly videoing all of the roads in the area right there to document any excessive damage that might have been done by oil-and-gas to get that repaired. Something the City Council adopted four or five years ago, we are asking the oil companies to remit an annual fee to us for the wells inside the city limits, and the wells that use our roads, which goes to a different fund to help us repair those roads that are damaged by oil-and-gas. We estimate right now we have around three million dollars in damage that has been done to our roadways by oil-and-gas. We have collected about a half-million dollars over the last five years.

“I do want to point out that oil and gas does pay a gross production tax that goes to the State of Oklahoma. The State of Oklahoma does reserve a certain portion of that for repairing streets. However, that money is remitted to the counties, and Grady County has chosen not to spend that money inside city limits to help us repair roads. We are working with our legislative delegation to try to get legislation passed that would direct some of that money to the city level. This year, it passed the Senate, but stalled in the House.”

The planning commission will hold a special meeting tomorrow, Wednesday, June 9, at 6 p.m. regarding this issue.

Retired firefighter finds new way to give back