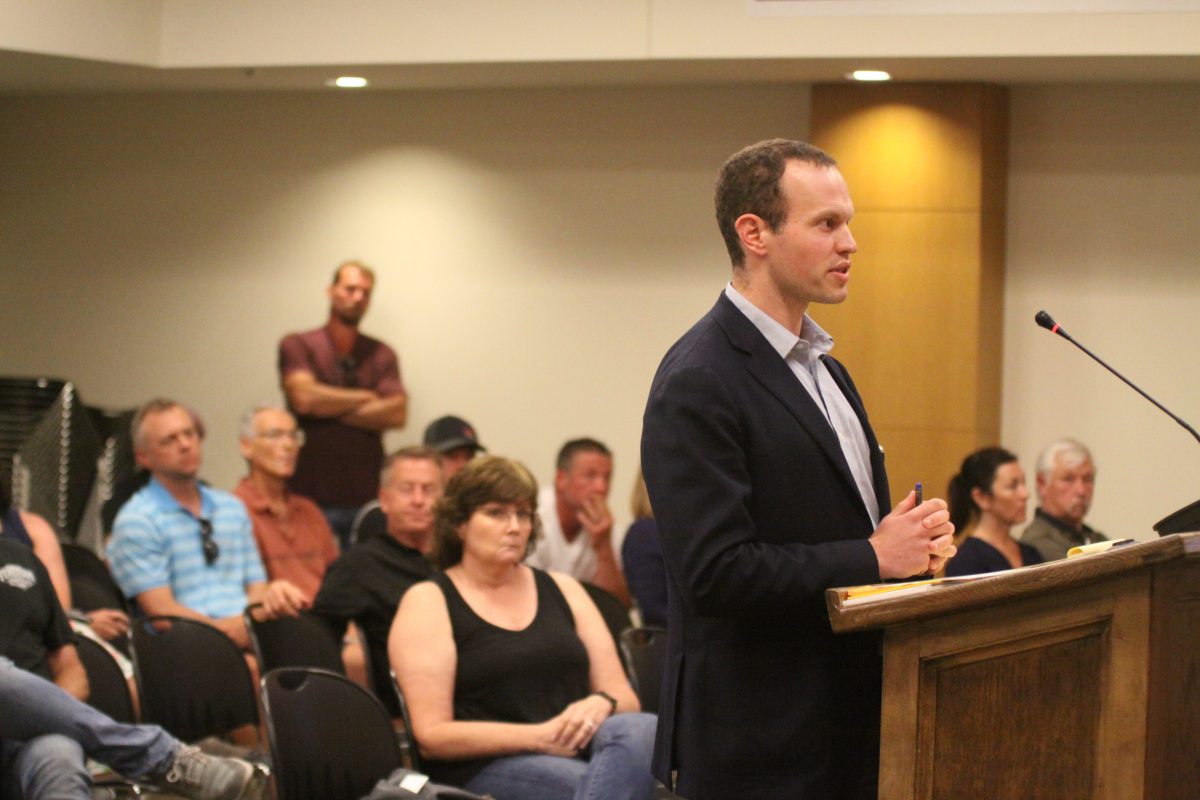 Citizens Energy representative Stephen Clayman speaks to the planning commission in Tuttle Wednesday, June 9, surrounded by citizens who are unhappy with the placement of the new wells the energy company is requesting. Due to 2015’s SB809, the planning commission is unable to deny the permit without the city potentially facing legal action. The city council is scheduled to discuss the issue July 12. Staff photo by Jayson Knight

The Tuttle Planning Commission handled several items Monday, June 7 before finding contention with a request from Citizen Energy for a specific use permit to drill five oil wells, to be located near several homes along East Silver City Ridge and Sara Road.

More than a half dozen citizens spoke against the SUP at the Monday meeting, citing noise pollution, light pollution, concern for wildlife, roadway damage, roadway safety, and more. There were more than that in attendance.

The planning commission held a special meeting Wednesday, June 9, regarding this issue, which gave more area homeowners an opportunity to speak out against it.

Jeff Nett spoke before the planning commission Monday, and then again on Wednesday.

“I already kind of talked about my concerns on Monday but I’d like to know what the acceptable noise limits are,” Nett said last Wednesday. “I’m right on the west side of the creek. The property line goes beyond the other side of the creek. My concern is with the noise levels. It’s not just the drilling and the fracking, this is going to be for the rest of my life. The compressors, the trucks, everything else. 70 decibels or higher causes hearing loss. I work in an industrial manufacturing plant as an electrician. We have to have annual hearing tests, annual training on hearing conservation, and anything over 70 will cause hearing loss, so I’m concerned with what the long term effects of the noise is. I’ve already talked to our contractor, and I can pay a fee and have them put some equipment in my house and they’ll monitor it.”

Nett also asked if he would need to get a foundation inspection if Citizen Energy was going to be fracking under his house.

Rhonda Bennett was another of the many citizens who spoke at the special meeting Wednesday.

“My concerns are with that private road,” Bennett said to the planning commission. “What stops the trucks from speeding down there? Because we have a constant flow now with just the Griffin wells there with these trucks coming in off of Morgan from both directions. Even though there’s signage that says they’re not supposed to, they come flying down over a cattle guard that rattles the houses and you hear it. The dust that’s raised gets on everything. And I realize that during the drilling process, there’s to be even more traffic. It started with gravel, which was horrible. They came in and they put [something] down on our part of it, and that’s caused flooding when it rains. The roads higher and the water stands more. They were trying to solve the problem, and I get that now, but the dust is still horrible because as soon as you hit that cattle guard, it turns to gravel and it just floats in the air which affects my quality of life. I get nothing for this. What can they do about the trucks speeding down the road? They have a sign that’s pretty small that says 25 MPH. It was so small and it would fall over with winds and the rain.”
Bennett stated those were her main concerns.

David Vint said Wednesday at the special meeting, “It seems as though the proposal would not be able to be approved given what we’ve heard, with so many unanswered questions. The biggest concern I’ve got, I guess, is the noise. As I expressed Monday, it’s going to ruin peace and quiet. I realize that’s not a big concern for a lot of people. It may have been expressed that the company does care, but when you take away someone’s common quiet, that is something that can never be returned. The decibel level that was mentioned was 110 at the site. Well, the ordinance indicates 70 during the day from the edge of the pad if I’m not mistaken, and 50 at night at the nearest residence. Now, the production of the oil includes the trucking and all the activity. All of these trucks coming and going, whether it’s day or night, the reverse signals and beeping that happens at random. If it’s a constant noise, you might get used to that even though it’s going to ruin your peace and quiet, but the random trucking, coming and going, backing up, and the beeping and stuff, that’s going to be very disruptive. I have to get up in the morning sometimes at 4 a.m. to 4:30 a.m., so I have to go to bed at 8 p.m. What’s going to assure that there’s enough peace and quiet for me to be able to sleep, be able to get up, and responsibly do my job? My other concern is what are the rectifications for the violations? There have been expressions of ‘we’ll do this’ or ‘we plan on doing this’ or one thing or another, but there doesn’t seem to be a hard and fast plan of what we’re going to do, how we’re going to make sure the sounds are at this level, and so on and so forth.”

Another homeowner who will be heavily affected will be Tuttle citizen Preston Paul. He has a Citizens Energy pad that is currently located near his home, on the opposite side of his home from where Citizens wants to build five more wells.

Paul suggests that with a little cooperation and compromise, it should be possible for Citizens to do what they need to do without upsetting so many of his neighbors.

“I was here on Monday to visit about this deal,” Paul said at the special meeting Wednesday. “I’m in oil and gas. I’ve had firsthand dealings with Citizens Energy. I do not have an issue with oil and gas, that’s how I make a living. These guys have the previous wall pad that is to the east of the proposal wall pad. Mr. Freidas and the gentleman from Citizens behind me know that they can reach all five of those wells from the previous pad to the east. Four of those wells are easily done. One of those wells will be difficult. I know that it’ll cost more money. What I ask for is a compromise. We should be able to work with each other.

Every one of those properties, like Jeff (Nett)’s, the well is right on the creek. My house is to the east and roughly a quarter mile right there. I ask for a compromise because I know these guys are not going to want to go to the existing pad that is back there right now. We could put them behind the trees back behind my property. That puts it closer to me, and it’s more for me to deal with, but it will protect the wildlife and water. I’ve heard them say that they’re going to flood proof it, and I know that what they’re doing works, but that’s not if we have a tornado. You’re right on top of a creek, you’re not going to be able to keep it out of the water in that situation. If you’re farther up land, and you do have something that gets out, it’s fine. They’re going to have containment around their tanks. They’re going to build a lot of things, but we could move it a little bit to the east behind those trees, and you get it right off the top of all those neighbors.”

Citizen Energy will present this item before the Tuttle City Council Monday, July 12. That meeting is set to begin at 7 p.m.

Senate Bill 809 was passed in 2015 by then-Governor Mary Fallin. The bill restricts municipalities from saying no to propositions such as this. It reads, in part:

“A municipality, county or other political subdivision may also establish reasonable setbacks and fencing requirements for oil and gas well site locations as are reasonably necessary to protect the health, safety and welfare of its citizens but may not effectively prohibit or ban any oil and gas operations, including oil and gas exploration, drilling, fracture stimulation, completion, production, maintenance, plugging and abandonment, produced water disposal, secondary recovery operations, flow and gathering lines or pipeline infrastructure. All other regulations of oil and gas operations shall be subject to the exclusive jurisdiction of the Corporation Commission.”

For a look at the full text, go online to ok.gov.