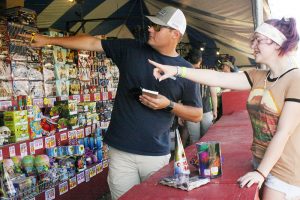 Macie Hasel points out a firework to Timmy Cote with Liberty Firewoks in Nicoma Park. (PHOTO BY RYAN HORTON)

For many, fireworks are the most anticipated aspect of annual Fourth of July celebrations.

Many eastern Oklahoma County residents especially take pride in discharging their own fireworks at private parties and social gatherings around Independence Day.

However, local fireworks distributors are warning that a nationwide firework shortage could put a damper on some summer holiday plans.

“If you really want fireworks for a party or family get together, we recommend you shop sooner rather than later,” said Liberty Fireworks co-owner Kristi Brewer-Campbell.

“There’s going to be less fireworks available this year.”

Across the country fireworks are in short supply with many factors keeping the product selection limited and those available often have a higher price than previous years.

“China was depleted last year, and they’re still behind now. Prices are up because of the lack of product, tariffs on China and increased costs of shipping,” said Campbell.

“It’s been tough. You’ll already notice less stands are out this year.”

The Nicoma Park Liberty Fireworks tent was one of the first local stands to open this season, but their second Harrah site won’t be open at all this summer.

“We’re not opening our Harrah location. Instead, we’re just concentrating on what we need to keep this stand open. We order early, but a lot of these smaller stands are really hurting right now,” said Campbell.

“We have the inventory to keep our prices competitive, but it’s been really tough especially for a lot of these smaller stands.”

Campbell encourages shoppers to get their fireworks early or run the risk of only being a spectator this season. 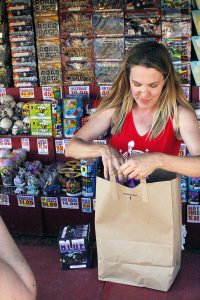 Liberty Fireworks co-owner Kristi Brewer-Campbell loads a bag for a customer at the Nicoma Park tent. (PHOTO BY RYAN HORTON)

The day will include live music all day running from 2 to 10 p.m. and concludes with a fireworks show at 10 p.m.

Beer, food and other vendors will be onsite.

Family fun will run from 2-10 p.m. with live music all day and the highly anticipated fireworks show will start at dark. As always admission is FREE.

“We have a new shaded area and will have a second tent setup for shade.”

Liberty Fireworks has been serving the eastern Oklahoma County area for 29 years with their large tent located right off of NE 23rd Street, and has become well-known throughout the state for great product, prices and service.

Even with the ongoing national firework shortage, Liberty Fireworks is fully stocked.

The annual show that has attracted thousands to eastern Oklahoma County each summer consists entirely of items available for sale to the public.

“Everything that you see at our fireworks show, you can buy here. Anything we do here, you can do at home,” said Campbell.

“We encourage everyone to bring their chairs and come out for a great time. We’re going to have great music all day, but our headliners are two really talented up and coming local artists.” 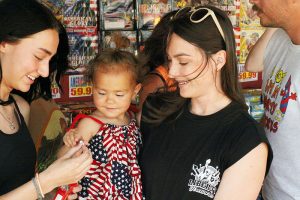 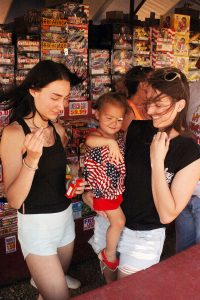 Delta Brewer can’t contain her excitement as Katie Campbell, left, and Taylor Carroll, right, introduce her to the joy of fireworks at Liberty Fireworks in Nicoma Park.
“Pop Snaps” are small novelty fireworks that make noise when thrown against a hard surface. The “poppers” or “snappers” are a longtime favorite of children and adults alike as they’re small explosives that are very sensitive to impact, but relatively harmless.
(PHOTOS BY RYAN HORTON)