The City of Choctaw announced last Wednesday that the City Council had selected Ronnie J. Guest, Jr., as Choctaw’s next city manager.

City officials say in his role as city manager for Carrizo Springs he has served established a reputation for transparency with the community with a commitment to constituent services.

“I am proud to announce Ronnie Guest as our new City Manager,” said mayor Randy Ross.

“The hallmark of Mr. Guest’s career has been his drive to serve communities and bring people together to improve the quality of life for all. His devotion to working with all stakeholders to achieve the best outcome for the community in south Texas made him a stellar candidate for this position, and I am confident that he will bring that same passion to his service in Choctaw.”

Guest landed his first city manager position in December of 2019.

Before that he served a five-year stint as the community relations advocate/contract administrator for CPS Energy.

Prior to that, Guest served the City of San Antonio in multiple capacities including the San Antonio Police Department; Housing and Neighborhood Services; Animal Care Services; and within the city manager’s office. He has also served as a member of the United States Army and is a past member of the Kansas National Guard. His professional affiliations include the Texas City Management Association (TCMA) and the National Forum for Black Public Administrators (NFBPA).

“My passion for local government started with my father serving as a police officer for the Topeka Police Department in Kansas. I love engaging with residents and my priority is assuring that every encounter my team has with our residents are impactful, while offering the best level of customer service possible,” said Guest. “My motto is ‘One Team One Goal.’ Each day, I serve is another day to make a difference in someone’s life, while improving their quality of life.”

He was born in Muskogee, and raised in Topeka, Kansas.

Guest’s other interests include traveling with his wife, Carol, and working with at-risk youth.

Guest will assume the role on July 26. 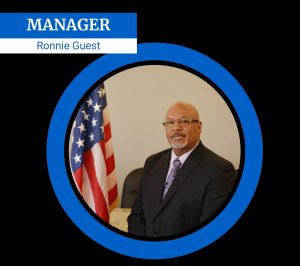