Local 10U players finish atop 46 teams in Alabama 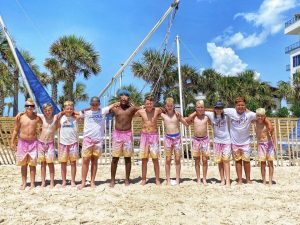 The Pistols celebrate a successful trip to Gulf Shores, Alabama.

The Pistols, a local 10U baseball team, recently had the opportunity to travel to Gulf Shores, Alabama and compete in the World Series.

The team went a perfect 8-0 to become World Series Champions.

“I am sure some think we are crazy for the time and money we invest in our sons to play baseball. What they might not know is we get to spend some time with some of the best families on earth,” said Jacob Freer, proud Pistol father and Assistant Principal for Nicoma Park Middle School.

“I was always taught to work hard and enjoy the process, not to worry too much about the end result. The closer the Pistols got to the championship, the harder that was to do.”

The Pistols recorded 91 runs and only allowed 18 runs throughout the week-long, 46-team tournament.

The team consists of many eastern Oklahoma County standouts and a few players from nearby communities.

Frye is a Westfall Elementary student. Frye hit a monster grand slam in the fourth inning of the championship game to tie the score, 4-4.

Fryar attends Westfall Elementary and his first home run of the tournament was also a grand slam.

Guthery is the son of Jones Elementary Principal Brooke Guthery.

Deacon Hawley and Paden Carroll are players from the Edmond area.

“The Pistols were blessed to welcome these two boys onto the team this season. We leaned on their arms and bats this season more than they will ever know,” said Freer.

Calton joins the Pistol roster from the Mustang area.

He recorded seven home runs in the tournament including a walk off three run shot to win the championship.

“A huge thank you to our coaching staff! John Fryar, Landon Cordray, Kyle Williams and Travis Calton, you are remarkable men and we appreciate you leading and coaching our boys,” said Freer. “The Pistols did a remarkable job and played with grit. They never gave up and found success on the beach in south Alabama.” 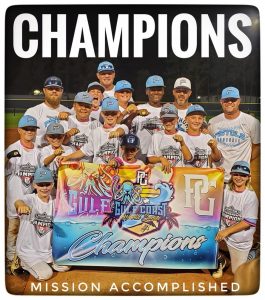