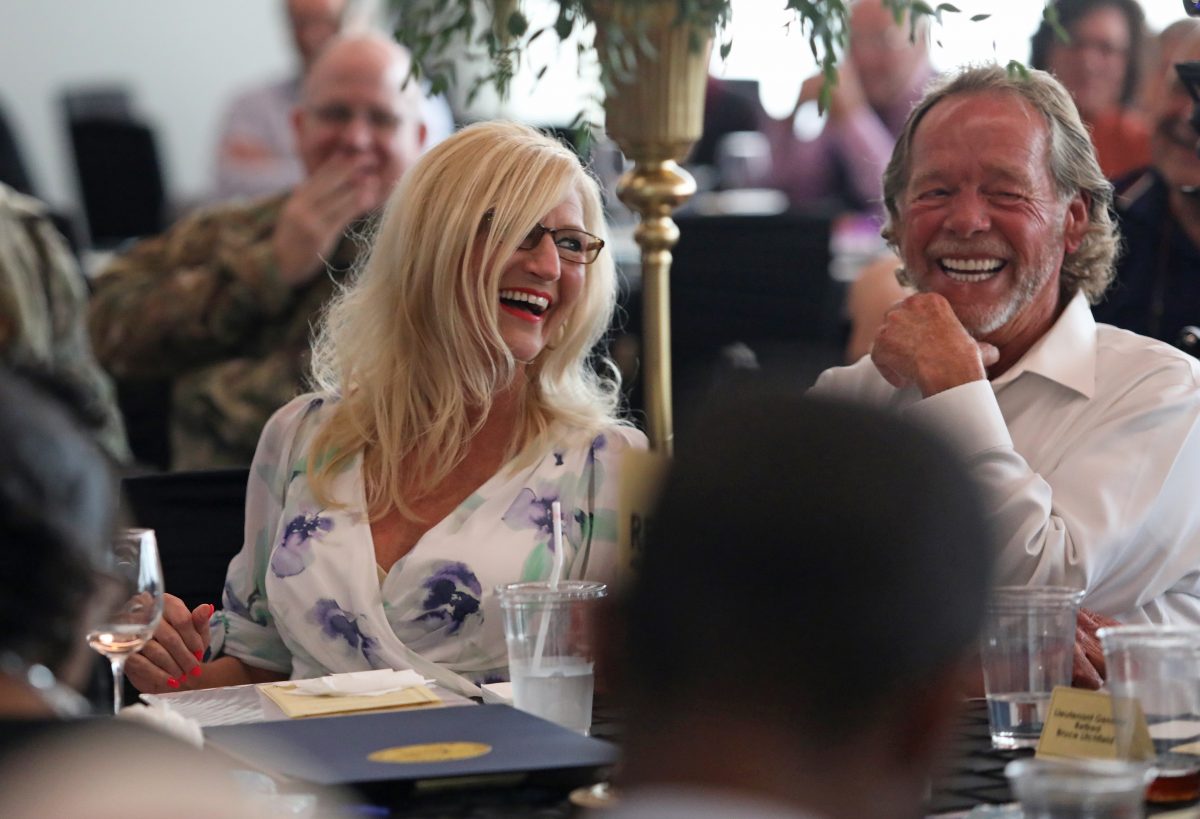 Bonnie Cheatwood and her husband Donnie share a laugh last Thursday during her retirement celebration at Rose State College. Bonnie retired after nearly 20 years as executive director of the Midwest City Chamber of Commerce. The couple plan to move to Florida to be near family. (Photo by Jeff Harrison)

For more than 30 years, Bonnie Cheatwood has worked behind the scenes organizing events, projects and campaigns for the betterment of Midwest City and Tinker Air Force Base.
Last week, the script was flipped.

Cheatwood was the center of attention as community members and military leaders thanked her for her dedication during a retirement celebration. The event was held at the FNB Community Bank ballroom at Rose State College.

Cheatwood served as executive director of the Chamber since 2001. She also worked there as member services director from 1986-1993 and later served on the board of directors from 1993-2000.

Throughout its history, Midwest City has served as a support community for neighboring Tinker Air Force Base. Cheatwood embraced that mission by building strong relationships with base leaders and providing support for military members and veterans. 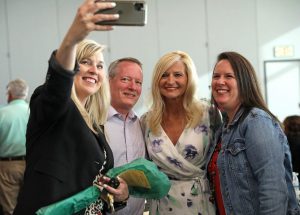 Lt. Gen. Donald “Gene” Kirkland, Commander of the Air Force Sustainment Center, said he’s been stationed at bases all over the world but Midwest City stands above the rest due in large part to Cheatwood’s leadership.

“During my two tours at Tinker Air Force Base, I’ve learned that Midwest City punches well above its weight,” Kirkland said. “And the engine that powers that is the Chamber of Commerce and in the middle of that is Bonnie Cheatwood.”

Retired Lt. Gen. Bruce Litchfield called Cheatwood an “amazing nerve center and heartbeat for this town.” He thanked her for supporting all members of the military and making them feel connected to the community.

“I’ve been in the Navy for 22 years and every time I hit a milestone in my career it’s been here. And every time I come back here it feels like home. And I just thank you for making this a nice home to come to,” Majoris said.

Several others from the community spoke to Cheatwood’s service.

Thomas Lewis, field representative for Congressman Tom Cole, said Cheatwood has been an inspiration and a true friend. He quoted Eleanor Roosevelt saying that “true friends leave a fingerprint on your heart.”

Mayor Matt Dukes thanked Cheatwood for her unwavering support for all things Midwest City. He presented her with a proclamation declaring June 24, 2021 as “Bonnie Cheatwood Day” in Midwest City.

“Her enthusiasm and her love for the City of Midwest City is phenomenal,” he said. “And what you’ve given to this city cannot be repaid in any way, shape or form.”

“This community and Tinker Air Force Base are all stronger because of the time, commitment and what you’ve done,” she said.

“Nobody says no to Bonnie,” he joked.

Christine Martin and Kimberlee Adams represented the Chamber of Commerce and described Cheatwood as the “total package.”

“You put people at ease, you brighten a room when you enter, you make it okay for people to laugh and have fun and work really hard and still accomplish so much,” Adams said. “You are the consummate professional with exceptional class.”

They presented Cheatwood with a plaque and announced that the Chamber board room will be dedicated in her honor.

Cheatwood concluded the event by thanking her family and everyone who helped over the years.

“Thank you all for the successes of the Chamber. Thank you for believing in me, investing in the Chamber and this community and for your love. And thank you all for coming,” she said.
Bonnie’s husband Donnie Cheatwood played saxophone and sang along with a live band. He led the program by playing the National Anthem and also serenaded his wife with a performance of “Only Sixteen.”

The Cheatwoods are both retiring and moving to Florida to be closer to family.

Marcy Jarrett has been hired as the new executive director. She comes to Midwest City from Enid where she worked as director of Visit Enid. 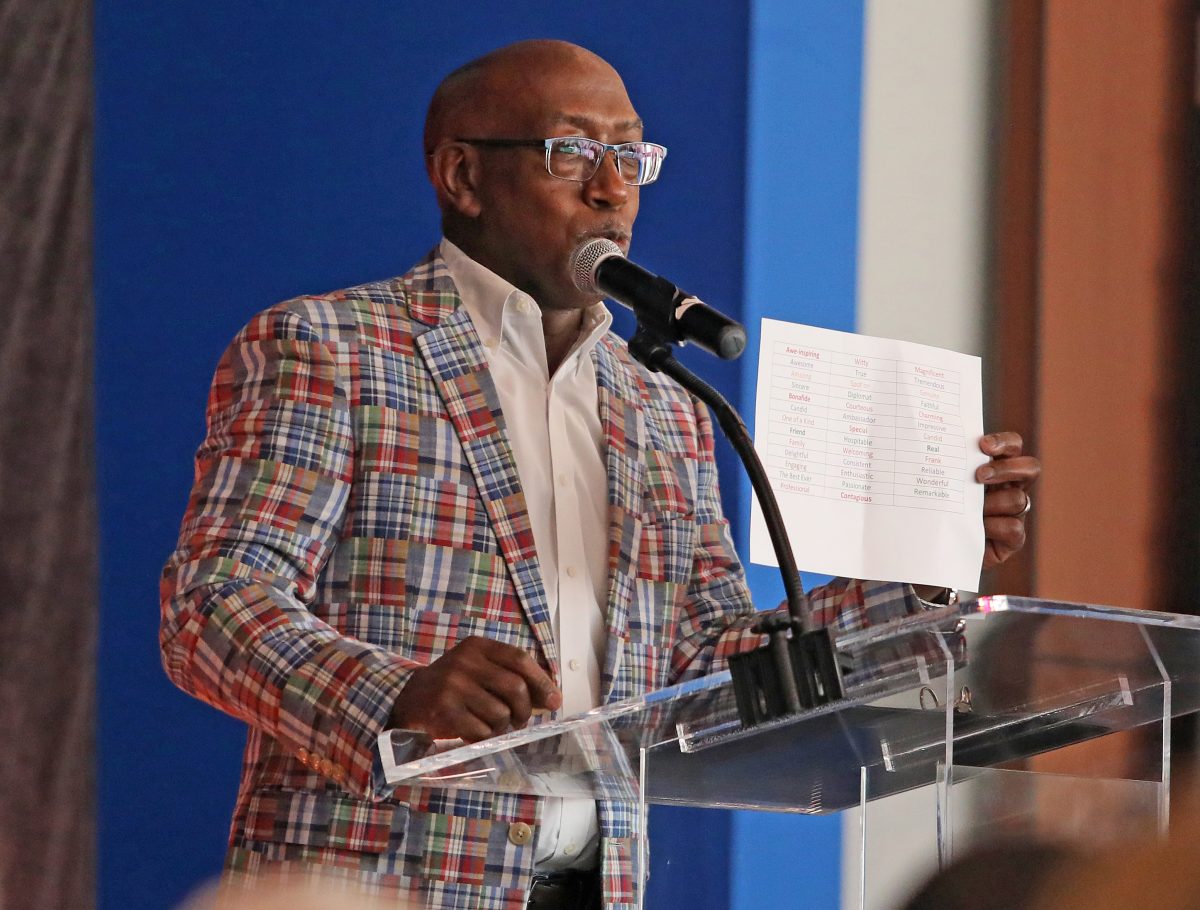