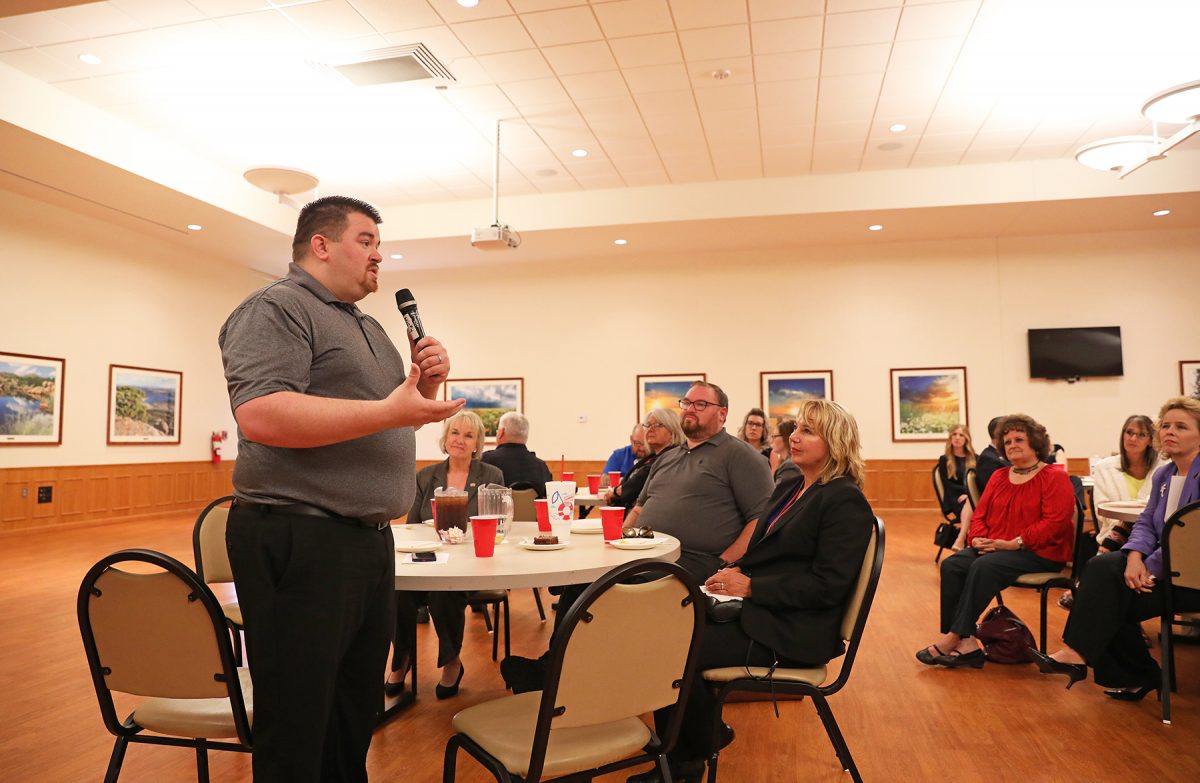 Del City leaders had a lot to say last week at the annual State of the City luncheon.

Mayor Floyd Eason touted progress over the past year including numerous projects as well as increased staffing to better serve and engage with the public.

“This city is doing better than I think it ever has,” Eason said during the June 22 event.

Councilman JD Hock applauded the city on upgrading technology at City Hall and other departments. The city has improved technology equipment and developed a social media presence to better connect and engage with the public. Soon the city will live stream meetings on social media.

“It’s nice that we can have things to better connect with constituents,” Hock said. “One of the big things I wanted was a social media presence for Del City.”

Miranda Hodge, Del City grants manager and marketing coordinator, oversees the city’s social media presence and communication with residents.Councilman Kyle Gandy, who is the newest member of the council, said he’s proud of the improvements and actions taken by the city over the past few years and pleased to see it resonating with residents. 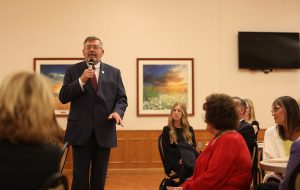 Del City Mayor Floyd Eason talks about progress made over the past year during the State of the City Luncheon on June 22. (Photo by Jeff Harrison)

“We have the momentum of all of the great things we’ve been doing in this town the last two to three years and it’s doing nothing but increasing,” he said. “We always hear the negatives, but the positives are far, far outweighing the negatives.”

“It will be a great revitalization of that area,” he said.

Fire Chief Brandon Pursell applauded his department for working through challenges of COVID-19 to continue serving residents. The department also improved its Insurance Services Office rating from a level 3 to 2. He said the improvements are a result of water system improvements, staffing, training, facility and equipment.

Police Chief Steve Robinson said the city saw a 19% decline in major crimes over the past year. They have also increased patrols to combat a spike in thefts of catalytic converters.

“Across the nation we’ve heard stuff about defunding the police,” he said. “Del City took the opposite approach of funding us and getting us the resources, better equipment and officers out in the field. It showed a positive result.”

One of the new city employees is Brittany Parrott who is committed to improving customer service at City Hall.

“I am out there available at all hours of the day,” she said. “I’m not restricted to any one department. If I don’t know the answer, I know where to find it and we’ll get it straightened out.”

Sen. Brenda Stanley and Rep. Andy Fugate gave an overview of the recent state legislative session and its impact on the community.
Stanley touted the state’s balanced budget that prioritized education and tax relief for families and small businesses. The state allocated an additional $210 million to education. She said they also securitized $4.5 billion in debt due to the February winter storm. That protected residents from large spikes in energy bills.

“If we had not done this your utility bill would be thousands of dollars,” she said.

Stanley, who is vice chair of the Veterans and Military Affairs committee, helped pass legislation to allow dependent children to enroll in school quicker by allowing military families to enroll students in the school of their choice before relocating to Oklahoma.

“Before they were actually going as far as out of state to take care of somebody and now it’s limited to 30 miles,” Fugate said. “And we gave them an additional $12.5 million as part of the budget to provide some tele-health so when they have those first responses and deal with people with mental health issues they’ll be able to get them connected to mental health treatment immediately.”
Fugate said the state legislature again failed to provide mental health treatment in every county as part of State Question 781 which was passed by voters five years ago.

“So far it’s been five years and we’ve put zero money in there (for State Question 781),” Fugate said.

Fugate said the state must improve its system for issuing drivers licenses. Last year, the state began issuing REAL IDs which take longer to process than a traditional license. That has bogged down the process at many local tag agencies.

“Previously they could do a driver’s license in about four minutes, now they take between 20 minutes and an hour,” Fugate said. “That is why our tag agents are having people sign up some times weeks in advance. That’s a big problem for people relocating to our state and for kids who passed their drivers test and can’t get a license within 30 days.”