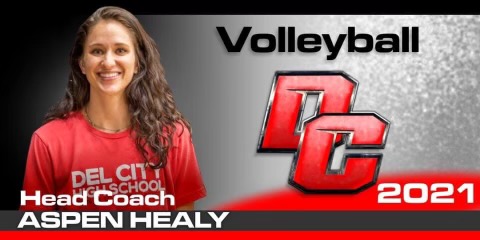 And they’ll do so with a new head coach.

Aspen Healy will lead the Eagles this year after serving as assistant in 2020.

Healy said she enjoyed getting to know the team over the past year and believes they have a lot of potential.

“Del City has some incredible athletes and I’m excited to work on their volleyball skills,” she said. “Volleyball is a pretty technical sport.”

Healy graduated from Putnam City North and went on to play volleyball collegiately at Oklahoma City University. She majored in bio medical science at OCU but later pursued a career in education and coaching.

“I started playing volleyball when I was 15 which is a little bit later than most girls,” she said. “I grew up in a small town and when we moved to Oklahoma City my dad made me try out for volleyball. I ended up loving it and played in high school, college and am now coaching.”

Healy has coached with Rise Volleyball Club since 2015. She also served as an assistant at Putnam City North and Casady. She was hired at Del City last year as an assistant coach and physical science teacher.

Del City will begin its fall practices on July 15.