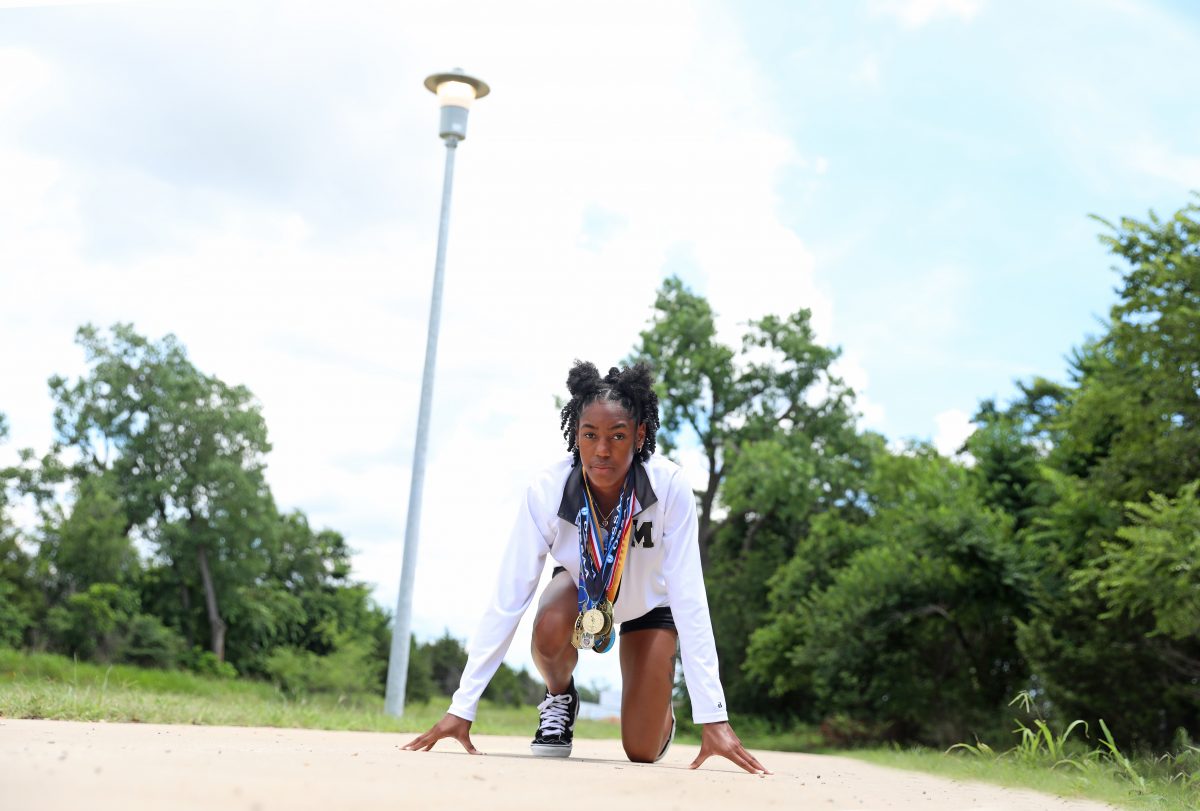 Taniya Looney is competing in AAU and USA Track and Field as well as AAU basketball this summer with Team Griffin. (Photo by Jeff Harrison)

Summer has not provided much of a break for Taniya Looney.

The Midwest City High School senior has spent much of her break honing her skills on the basketball court or track.

Looney is a standout basketball player and sprinter for Midwest City. She is coming off an impressive junior year. She helped the girls basketball team reach the Class 6A state tournament for the first time since 2016.

And in the spring, she won two gold medals and set a state record in track and field. Looney, Grace Pendarvis, Imani Osborne and Deyunsha Westbrook broke the state record in the 800-meter relay and won the 400 relay at the 6A state meet. Looney also placed third in the 100 meters and sixth in the 200 meters.

“Being able to run again after last season was canceled just felt amazing,” she said. “I was setting PR (personal record) almost every meeting and being able to run with my teammates and get a state record was incredible.”

She is competing in both sports this summer through AAU as well as USA Track and Field.

In track, Looney says the extra summer workouts and meets help her better prepare for her senior year and college scholarship opportunities. She often competes against runners from other states.

“It helps mestay in shape and mentally prepare for the next season,” Looney said. “And it helps to see what other people are doing in different states because at the end of the day we’re all competing for scholarships. When you’re running out of state, you get to see what the other girls are doing, how they look in their events, how you line up with them.”

So far, she has won state meets in all three events. In the AAU state meet, she won the 100 meters and took second in the long jump. The 200 meters was canceled due to weather. Looney earned three state titles in the USA Track and Field state meet in Cherokee – winning gold in the 100, 200 and long jump.

Her next goal is qualifying and placing at the national meets later this summer.

In basketball, she plays for Team Griffin in AAU and has participated in high school camps at Midwest City. The AAU team has competed in tournaments all over the country including a pair in Texas last month with the Clash of the Clubs and Big State Flava Jam tournaments in Dallas.

Her track and basketball schedules will intertwine later this month with competitions in Florida. Her AAU basketball team has an upcoming tournament in Orlando, Florida. The next week she will compete in the track nationals in Jacksonville, Florida.

Looney comes from a track family. Her mother Charmalet Williams and uncle Clifford Looney were both standouts at Midwest City and Del City high schools. They were both coached by their father.
“He made me really love the sports,” Taniya said about her grandfather.

Taniya’s younger brother Maurice Williams competes in the shot put and discus. He placed at nationals before and will be a freshman at Midwest City. And her cousin Genesis Hillard, 10, runs the 800 meters and placed third at nationals.

Taniya said she wants to keep up with her family.

“Yeah, I’m excited about it because it’s my time to get one,” Taniya said.