When the Harrah City Council gathered for its monthly meeting Monday night, there was a new face at the table.

Bower is no stranger to East Oklahoma County or Harrah, having served 31 years in the Midwest City Fire Department, 17 as chief and another 15 years as Emergency Management Director for the City of Midwest City.

Bower is the son in law of the late Bill and Delores Knox, who served as both city treasurer and city clerk for the city of Harrah. Bower is also the husband of the lovely and talented DeAnn Knox Bower, one of the great girls basketball legends in the history of Harrah High School. 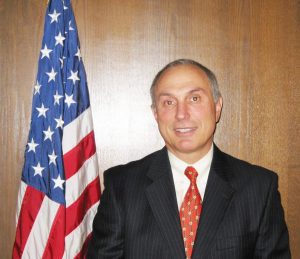 Bower is also well known for his own athletic abilities, beginning his boxing career in 1973 participating in Amateur Golden Glove Boxing with Heath Boxing Club. In 1981 Mike began boxing on the Toughman Circuit winning the Oklahoma State Toughman Championship in1981 and 1983.

Since that time he has continued his involvement in boxing serving as a sparring partner, manager and corner man before his appointment to the Oklahoma Athletic Commission in 1999 by Governor Frank Keating. Mike has served four terms on the Commission under three Governors.

Mike and DeAnn also are parents and grandparents to gifted athletes, including daughter Courtney who has point guard for the Lady Yellowjackets basketball squad and pitcher for the softball team, both state champions in 1994-95 and son Michael, a standout linebacker for the football squad.

“I’m looking forward to working with the City of Harrah until they find someone permanent for this job. I’ve spent a lot of time around Harrah and I am excited for what the future holds,” said Bower.
“We are very fortunate to have a person with the expertise of Mike Bower to serve in this transition position,” said Ward 4 Councilman Cass Smith. “He is very familiar with the workings of city government and we are very pleased to have someone with his expertise on our staff.”

Upon his retirement as MWC Emergency Management Director, Bower was honored by the Oklahoma Fire Chiefs Association with the Heritage Award.

The nomination stated that Bower was on the cutting edge of hazardous materials training and response, including as shift commander for the Midwest City Fire Department’s hazmat response team, and served as the emergency response coordinator for Sunbelt Environmental management.

Bower also served as regional director for the Fire Service Instructors of Oklahoma.

After retiring from the fire department, he transitioned to the emergency manager position. He received a certificate in emergency management from Northeastern State University in Tahlequah and has completed multiple professional development courses through the Emergency Management Institute.

His other service and leadership credentials includes positions with the Urban Areas Security Initiative, the Region 8 Homeland Security Council and the Oklahoma County Local Emergency Planning Committee. Bower has also helped the city receive millions of dollars in grant dollars for storm shelters, radios, mitigation and other projects.

“The 2007 ice storm was huge for us,” he said. “It took a long time to get everyone’s power back on. I pray that Harrah or any other city never has to go through that again,” he said.
Meanwhile, it is business as usual at City Hall.