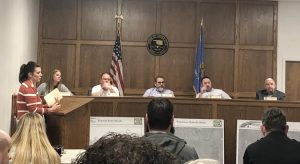 The Jones Board of Trustees hosted a public discussion regarding the proposed tax in an effort to inform the public and gather feedback before the election occurred. (PHOTO BY RYAN HORTON)

July 13 the voters of the Town of Jones City passed a one cent sales tax increase for the purpose of funding water and wastewater infrastructure improvements throughout the town.

Jones residents voted 154-92 in favor of the new sales tax.

“Thank you all for voting! The Jones Board of Trustees appreciate the trust you’ve show in us and we do not take it lightly. We will continue to work on earning it further,” said mayor Ray Poland.

The tax goes into effect on October 1.

Once in effect, Jones will have a five percent municipal sales tax rate.

Jones will collect a total of five cents for every dollar of sales tax generated in the town.

Officials say that extra penny will go directly toward fixing infrastructure that has been neglected for decades.

Calling for the election was first on the agenda for the newly elected Jones Board of Trustees in an effort to address the town’s limited budget and crumbling infrastructure.

Currently, an estimated $10 million is needed to make improvements needed to serve existing water customers and allow for proper firefighting capabilities within the town’s limits.

“I don’t know anybody that likes paying taxes, or anyone that enjoys raising taxes, I know I don’t like either. But I also know that in Oklahoma, city services are funded by a combination of sales tax and Public Works revenue,” explained Poland. “When the cost of services/infrastructure exceeds revenue and expenses have been stretched as thin as possible, one or both sources of revenue must be increased.”

Initially, revenue generated from the new tax will be used to fund capital expenditures related to the improvements needed for the water and wastewater system.