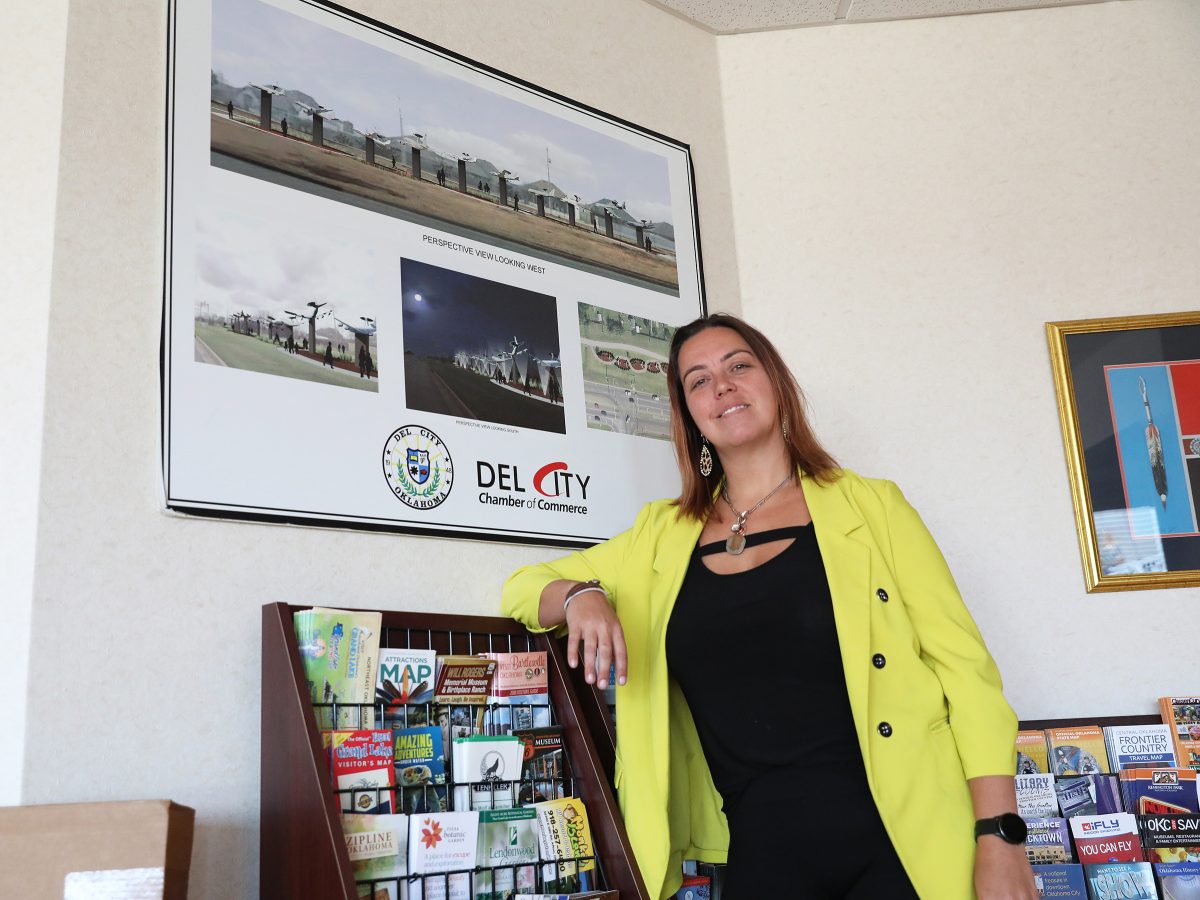 Erin Stevens was recently named the new executive director of the Del City Chamber of Commerce. (Photo by Jeff Harrison)

The Del City Chamber of Commerce has a new executive director.

Erin Stevens was recently hired to lead the business organization.

“I’m excited to be here and help this chamber and community grow and flourish,” Stevens said. “I’ll be an asset in mutually beneficial partnerships because what it boils down to is we’re all a team that can work together to improve everyone’s lives.”

Stevens brings a diverse background with professional experience in finance, event planning, and the travel industry, and close ties to the military.

She is originally from western Pennsylvania and New York. She moved several times since then as military spouse for 12 years including a stop at Tinker Air Force Base from 2007 – 2011. Her ex-husband currently serves in the U.S. Air Force.

While living in Clovis, New Mexico, Stevens she started working for Spectra Venue Management serving as a director of finance at one of their venues. She later returned to Oklahoma to work as general manager at the Heart of Oklahoma Exposition Center in Shawnee.

A friend referred Stevens to the job opening with the Del City Chamber of Commerce.

“I’ve worked with chambers in one way, shape or another for a long time whether it was through military affiliation or the events and I thought this was a really good fit,” she said.

Stevens said she’s excited to work with local business and community leaders to grow and improve the chamber.

“We want to find out what we can do to improve the community, improve the City of Del City, and encourage new businesses to move in,” she said.

As executive director of the Del City Chamber, Stevens is working to improve marketing through the use of social media and the chamber’s website.

“We’re creating more of a digital presence for us as well as setting that up for our membership,” she said. “Our members can log into their accounts and post their own hot deals and events. That way it can get out pretty quickly and get put right onto our website calendar. Digital integration is cool. It just makes stuff so much more streamlined and efficient.”

She’s also been busy meeting members face-to-face to get their feedback.

“We want to know what they want to see their chamber do, if it’s things like luncheons or after hours or morning mingles,” she said. “Whatever it is that we can do to help our members network and promote their businesses and community.”

Stevens is preparing for some of the upcoming annual events such as DelQuest youth leadership, and Del City Chamber Auction, which are scheduled for this fall. She is looking to add a couple of new events.

She replaces Kelly Wilborn who left the chamber this spring to accept another position with the City of Del City.