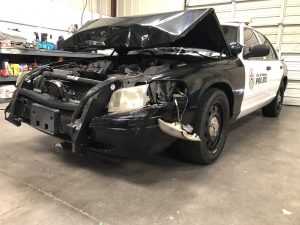 A cruiser sits at the Choctaw Police Department after being hit head-on by the driver of a stolen truck. Police say the officer bailed from the vehicle and managed to arrest the suspect a short time later without injury. (PHOTO BY RYAN HORTON)

A chase down Anderson Road Thursday left three police cruisers damaged as officers arrested a suspected truck thief after he crashed head-on into a Choctaw officer.

At approximately 9:50 p.m. August 5, Nicoma Park officer Blaine Lander encountered a truck pulling a heavily loaded trailer at 10th and Westminster. Police say the vehicle drove toward the officer’s vehicle causing him to take evasive action driving into a ditch.

Officer Lander stopped the vehicle in the 1400 block of Westminster, but upon contacting the driver, the vehicle abruptly drove away.

The vehicle was pursued through Nicoma Park city streets and ultimately down Anderson Road.

Police say the truck continued to run stop signs and drove in both south and northbound lanes as the suspect moved south on Anderson.

Choctaw police units engaged to assist in the pursuit in the 2400 Block of Anderson Road.

The chase ended there when the suspect crashed head-on into a Choctaw officer’s cruiser.

“The suspect vehicle attempted to make a u-turn and upon doing so, the vehicle struck two Choctaw police units. There was major damage to one Choctaw unit,” said Nicoma Park Police Chief Ed Smith. 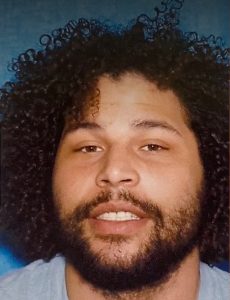 The suspect exited the vehicle and ran into a wooded area where he was taken into custody a short time later.

Authorities say the suspect wasn’t done damaging police property as he began violently protesting his arrest in the back seat of the Nicoma Park cruiser.

“After resisting arrest, he was placed in the back of the Nicoma Park police unit. While in the back seat he began kicking the back door of the police cruiser violently causing major damage,” said Smith. “The Oklahoma Highway Patrol was requested to investigate the collision of the suspect vehicle and the Choctaw units.”

Police say they then determined that the suspect’s Ford F-250 was stolen, and the trailer being pulled was stolen as well. The two separate thefts occurred several days ago in south Oklahoma City.

Nicoma Park Detective Lt. Mike Weiss was called out and assisted in working the scene to conduct the follow-up investigation.

Braxton Parham, 27, was taken into custody.

He was arrested for two counts of assault with a deadly weapon, one count of receiving and concealing stolen property, disorderly conduct, and vandalism/destruction of property.

Parham was transported to the Oklahoma County Detention Center.

Authorities say Parham is no stranger to the criminal justice system as he now has several pending cases of auto theft on his record.

He was arrested for leading several agencies in a high-speed chase down I-40 in February, and records show he has another case of auto theft pending in Cleveland County.

Choctaw Police Chief Kelly Marshall says two of her vehicles are now down leaving the department limited on cruisers. She’s thankful the Choctaw PD is equipped with properly outfitted cruisers as the collisions didn’t result in injury.

“I really think the brush guards on the front of these cruisers does a lot,” said Marshall. “This could have been a lot worse.”

Police say every pursuit poses risks to both officers and civilians. It’s the officer’s responsibility to weigh the risk and responsibility to end such chases based off of observed criminal behavior and dangerous speeds and conditions.