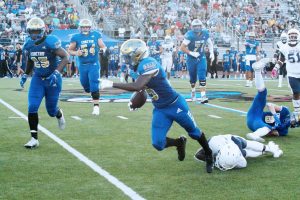 Choctaw’s La’Trell Ray slips by the Beacon hill defense on his way to the end zone during the season opener. Ray led Choctaw rushing with 110 yards and two TDs. He also had eight yards receiving and a 2-point conversion on the night. (PHOTO BY RYAN HORTON)

Choctaw’s offense marched up and down the field with ease going 478 yards on the way to eight touchdowns.

Meanwhile, Beacon Hill had no answers for Choctaw’s relentless defense.

The Jackets put up 145 yards passing good for four touchdowns.

Junior quarterback Steele Wasel connected on 12-of-14 throws for 110 yards and three touchdowns. He also rushed for 15 yards.

Freshman quarterback Cash Williams came in and connected on 4-of-5 passes for 35 yards including finding Juju Smith for a TD.

Conner Stover led receiving with 35 yards, while Curry had 32.

Jax Burchett had 26 yards receiving on four catches, Jackson had 18 yards, Jax Smith had 17, Will Selph had 12, Cade McConnell had nine and La’trell Ray had eight.

The Jacket run game was unstoppable with the team putting in 333 and another four TDs.

Ray led the charge with 110 yards and two TDs.

Smith, a freshman, had 62 yards, while Jackson had 60 yards rushing and a TD.

CJ Smith and Ross Griggs each had 43 yards rushing. Smith made a 34-yard dash for six.

Junior kicker Tommy Yousey hit six extra points and put some kickoffs through the endzone as the Jackets rolled on.

Senior Julius Pruitt kept constant pressure. Spencer Boles and the Yellowjacket defense blocked a punt that was recovered by Peyton Bryant and company in the endzone for a defensive

touchdown. To open the third quarter Choctaw added a safety on Beacon Hill.

Choctaw coaches say the Jackets demonstrated a lot of potential in the win, while allowing nearly the entire roster an opportunity to take the field.

“It’s a big win, and any chance you get a win we’ll take it. It was a good energy to start the year. Any year you start with a game in week zero, there’s going to be things to work on and all the kind of stuff. I thought we were able to start and fire pretty succinctly to start the season,” said head coach Jake Corbin. “We did well on special teams, offense, defense and we were able to play a lot of kids. Any time you’re able to do that and accomplish those things it’s a nice win.”

Choctaw’s primary goal is to improve weekly, and starting the year 1-0 while continuing to make history for the CHS program is a bonus.

“Overall, this was a clean game both offensively and defensively. Guys making good tackles, opportune on turnovers, not turning the ball over and making passes. Overall, just a clean football game to start the season,” said Corbin. “This team came a long way to play us. The first time in state history a Virginia high school team came to play an Oklahoma team. These guys will have that forever.”

Choctaw has a challenging upcoming slate beginning with a home game vs. Springdale, Arkansas Sept. 3.

“We have a really good Springdale team coming to town, and obviously they thumped us a year ago. We’re aware of that, and they’re a good team. We’ll be putting together a gameplan and hopefully get a good week of practice and keep improving,” said Corbin.
Sept. 10 Choctaw heads to Texas to face Dallas Jesuit.

The Jackets then get a week off before opening district play vs. Booker T. Washington at Bill Jensen Field, Sept. 24. 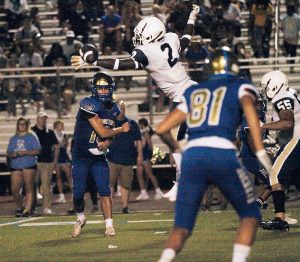 Coaches say Beacon Hill was scheduled to fill a hole in the Yellowjacket slate after other teams, including local contenders, refused to accept the challenge.

As a result, Choctaw will make history playing teams from four states this year.

This was the first time a Virginia team has traveled to Oklahoma for high school football.

The season-opening 66-0 shutout of Beacon Hill was the largest margin of victory since the Jackets defeated their former intradistrict rival, Dunjee High School, 70-0 in 1961.

This week Choctaw is preparing to host Springdale, Arkansas on Friday at 7 p.m.

Springdale is coming off a 36-24 loss to Van Buren, Arkansas.

For photos of the game vs. Beacon Hill checkout our Facebook photos GALLERY