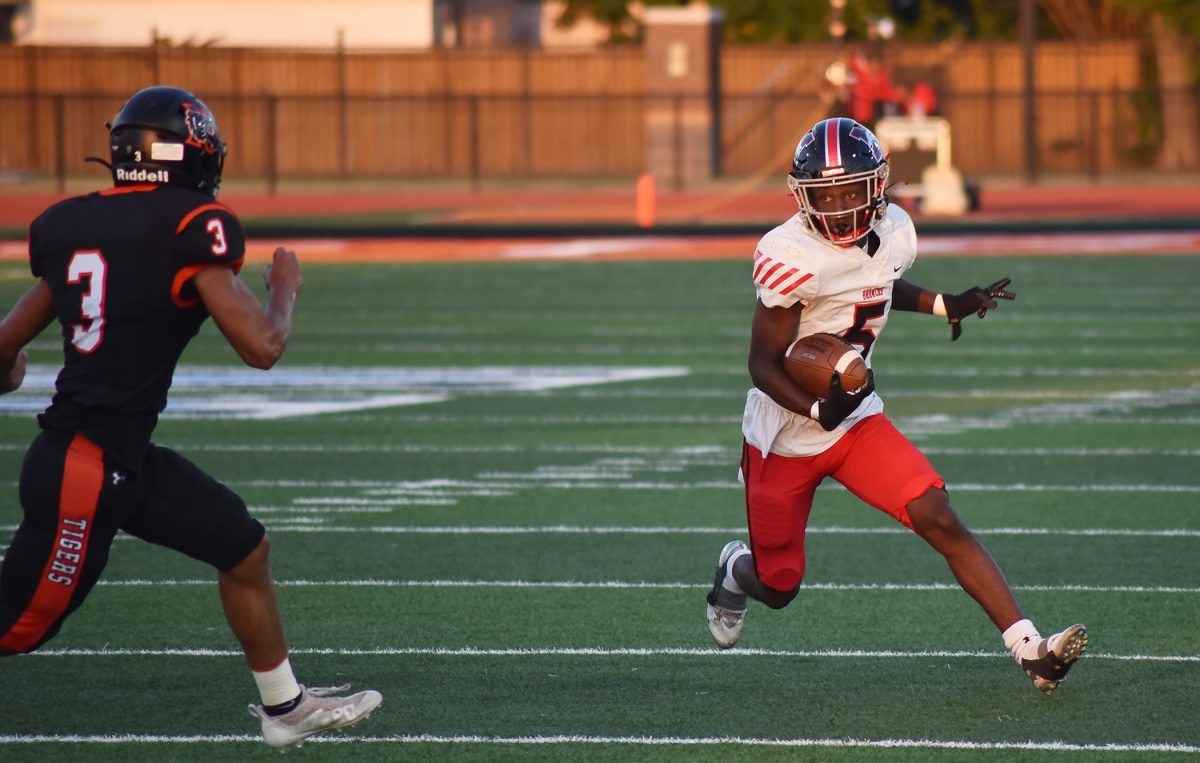 Mustang’s Jay Bedford tries to run past a Norman defender during a game last Friday night. (Photo by Alan Chapman)

Mustang quarterback Tristen Russell had premonitions early in the game Friday night that his Broncos and Norman would be trading shots all night.

“From the first quarter, I knew this was how the game was going to play out,” said Russell, who completed 21-of-29 passes against the Tigers for 328 yards and six touchdowns through the air. “I just had that feeling that it’s gonna be a shootout.”

The Broncos fell to 1-2 Friday night after Norman scored the last of ten combined lead changes with three seconds to go, taking a 62-58 lead, the eventual final score.

The game-winner to the score-for-score, barn-burning competition came via Tigers junior quarterback Tias McClarty, who scored six touchdowns on the ground against the Broncos. He recorded 30 runs for 254 yards.

“Maybe our kids thought we were gonna walk in and win the ball game even though we warned all week that we’ve gotta come and play good ball,”Mustang coach Lee Blankenship said.

It was the second consecutive week the Broncos fell to an opposing team after allowing a late-game, go-ahead score. 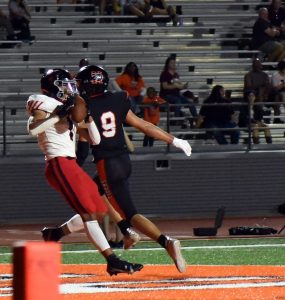 Leading 58-55, the Broncos forced a Norman punt from the Tigers’ 24 on fourth-and-12. After starting its ensuing drive with a first down, it appeared Mustang may drive down the field to take a two-score lead, but a Tigers defensive tackle had other plans.

Xavier Henry, a Norman senior, forced a strip just after the mesh on a Broncos run play, coming away with the turnover before being brought down by Russell at the Mustang 34 yard-line.

A few plays later, Mustang forced three-and-out for Norman, which elected to attempt a 38-yard field goal from the middle. The Tigers initially missed the attempt wide right and short, but a running-into-the-kicker call gave Norman the ball back, facing fourth-and-five from the 16 yard-line. The Tigers offense retook the field.

McClarty handled the snap before taking the sweep left, following a blocker, but a crowd of Mustang defenders met him near the line-of-scrimmage and wrapped him up.

Somewhere in the pile, however, McClarty lose the ball, and a teammate came up with it and ran for the first down, setting up first-and-goal for the Tigers.

A couple plays later, with the clock draining, McClarty took the snap, rolled right to pass, and floated to near the right boundary before tucking the ball and running for the game-sealing 3-yard touchdown to the front corner of the end zone.

Bass finished with 173 all-purpose yards, including a 73-yard kickoff return to open the second half that gave the Broncos a lead.

For Bass, scoring three touchdowns was no consolation for the loss.

“It’s cool or whatever scoring three, but all I care about is the scoreboard at the end,” Bass said.

Johnson had seven catches for 124 yards and three touchdowns. Oregon-commit Andre Dollar trailed with four catches for 80 yards, one touchdown and a two-point conversion.

“We threw the ball well,” Blankenship said. “We had some receivers like Bass and Johnson and Dollar that stepped up and made some big-time plays.”

The Broncos will play again at Harve Collins Field next week against Norman North to open district play.

Bass said his priority is to “encourage [his] teammates in all aspects of the game” and prepare for the Timberwolves starting Monday. Kickoff for that game is scheduled for 7 p.m. Friday night.