Tuttle Public Schools made a step forward on Tuesday with the help of the community and the philanthropy of the Chad Richison Family Foundation.

With the 4.75 million dollar bond proposal passing 394 votes to 194, Chad Richison, CEO of Paycom and Tuttle native, will be donating 9 million dollars.

With this donation, money saved, and the new bond, Tuttle voters will receive an $18 million dollar improvement to their school system without a tax increase.

This donation will not be the first contribution Mr. Richison has made to Tuttle Schools. He also donated 1 million dollars to help expand the wrestling room in the on-going phase three of construction. This gift led to a discussion centering around Phase 4.

After seeing the $18 million dollar plan to relocate the AG barn, provide additional classroom space, and restructure the football facilities, the Richison Family Foundation offered to donate half of the cost.

Mr. Sinor explained the bonded amount, “In the 2019 bond we had funds earmarked for improvements to the stadium, but it was not enough to cover the remaining 9 million. The difference was 4.75 million, and that was the amount brought before voters.”

When construction is completed, community members can expect to see the AG barn moved north of the track at the high school.

The current football field house will be transformed into a two-story multipurpose facility that will house an expanded weight room and a space that can be used to view film. There will also be four additional classrooms and a testing center that seats 120 people, and this same space will be used as a hospitality room when needed. Patrons can also expect to see a more efficient concessions area.

“I think it’s important for people to remember that while this does improve the football facilities, this bond issue is about much more than that,” the superintendent said. “This is an investment into our future.”

Mr. Richison’s philanthropy doesn’t end with Tuttle Schools. His foundation has donated millions to food banks, educational programs, the Oklahoma Educational Television Authority, and much more. They have also given $5 million dollars to the Hope Lodge, a facility that will provide free lodging for cancer patients who need to travel to Oklahoma City for treatment.

“It’s not every day you get someone who is willing to invest in our community, and we’re just thankful that we have people like Chad who are interested in giving back to their community,” said Mr.Sinor.

For more information about Tuttle Schools, go online to tuttleschools.info. 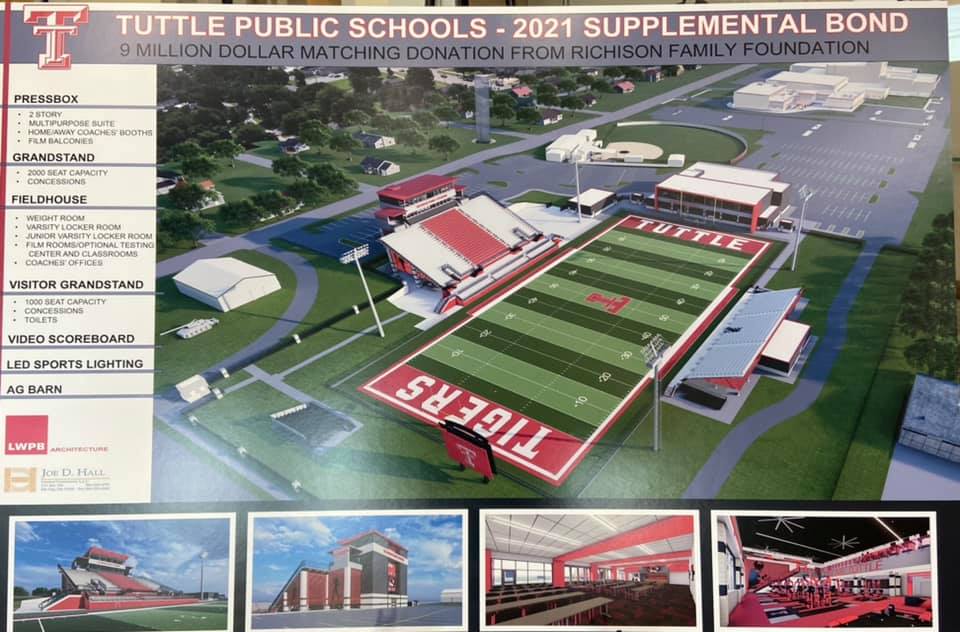