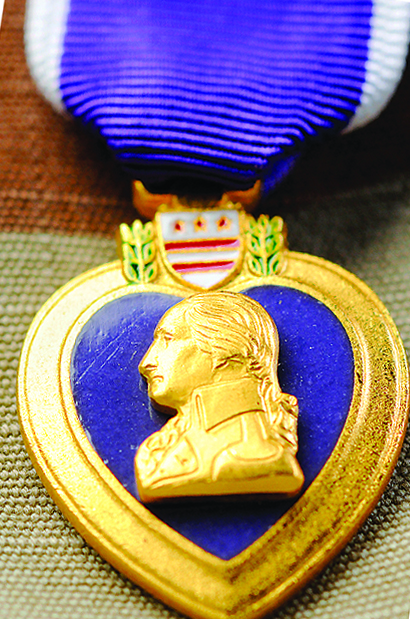 The City of Tuttle will be hosting a Purple Heart ceremony Thursday, October 28 at 7 p.m. at the American Legion Hall, located at 101 South Cimarron Road.

The Purple Heart Medal is awarded to members of the armed forces of the U.S. who are wounded by an instrument of war in the hands of the enemy and posthumously to the next of kin in the name of those who are killed in action or die of wounds received in action.

Commander Jim King, with the American Legion Rooker-Wallace Post 176, complimented the city for honoring these special servicemen and servicewomen.

“A couple of us went to the one that they had in Union City, and it’s not a long process,” King said Monday. “It’s probably a 15 or 20 minute deal. The City Council will be there, the Legion will be there, and everybody in the City of Tuttle that is interested in being involved can be there. This is wide open to the public and we’ve got some flyers from French’s Printing that’ll be put out this week. Anybody that wants to be there, we would really like to have people show up, because it’s a really good deal for the city.”

King, and other Legion members, are currently trying to recruit local Purple Heart recipients to attend the ceremony, and the subsequent reception.

Those two recipients are Johnny Ballard and Paul Birschbach.

“We really want any Purple Heart recipients to be there on Thursday for the ceremony,” the commander said. “Also, if they would be willing to contact the Legion, we can be sure that they’re recognized for their service and for what they’ve done. We want as much of the public to show as possible. The city did this Proclamation for us so that we could be recognized as a Purple Heart City, and that’s something that we need to make sure that the city gets recognized for. I think they deserve recognition for that.”