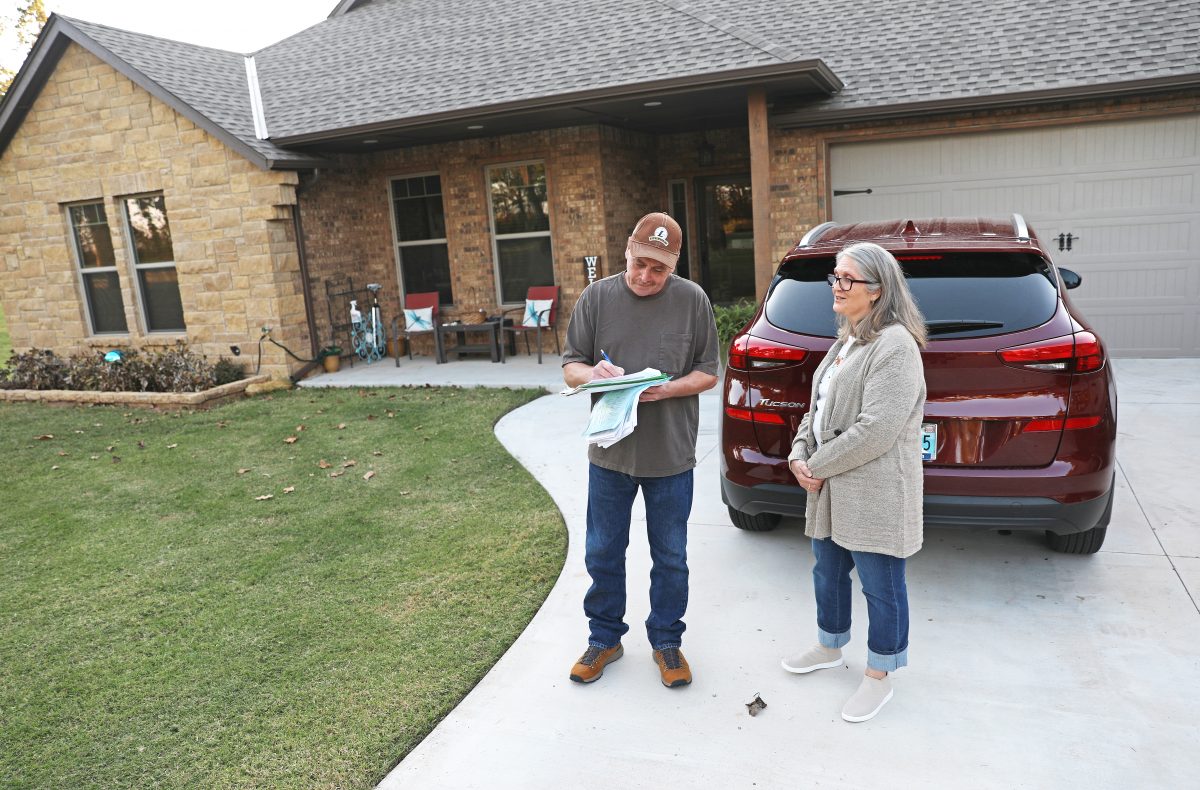 Ken Widner signs a petition opposing a proposed housing and apartment complex development near his home on S. Acres Dr. in Midwest City. Lori Williams (Right) is one of several residents collecting signature for the petition. Photo by Jeff Harrison

A large residential development planned for Midwest City’s east side is drawing strong opposition from residents.

The Summerview development would add more than 900 single family houses and apartments on 173 acres between E. Reno Ave. and SE 15th St., just east of Westminster Rd. A total of 364 houses are planned on the west side of the development and 560 apartments on the east portion.

The development would be accessible from SE 15th St. on the south, E. Reno Ave. on the north, with a proposed extension to Friendly Dr. on the west. It would include paved recreational and outdoor spaces.

A master development plan submitted to Midwest City’s Community Development office show that 57 acres or 1/3 of the land is located in a 100-year flood plain. Plans show four detention ponds would be built to help with storm drainage.

The project is being developed by Shaz Investments Group. The property is owned by Espanta Steppe of Summerview Premium Real Estate.
The developer is seeking to rezone the property as a Planned Unit Development governed by, High Density Residential and R-6, Single Family Detached Residential. The property is currently zoned for R-6.

The developer is seeking several modifications to zoning regulations, according to the master development plan presented to the Community Development office. The modifications for houses include smaller lot sizes, smaller yards, shorter setbacks from the street, and alley access for garages with the houses. The apartment modification requests are related to the height of the buildings.

Owners of the property cleared much of the wooded land last year. They reportedly told city officials that they planned to use the land to graze cattle.

“We were getting a lot of questions about it and the property owners told us they were using it for cattle, which was acceptable use for the zoning,” said Kellie Gilles, planning manager for Midwest City. “The normal process is to not clear the land until the preliminary plat is approved.”

Earlier this month, residents who live within 300 feet of the property were notified by the city about the zoning request. Several residents object to the development and are circulating petitions in protest.

Many of the residents say they oppose the project because of its size, location in a low lying area, addition of rental properties, and impact on the area beyond the 300-foot radius.

Lori Williams lives west of the property and has been actively circulating the petition opposing the project. Her family moved to the area about 30 years ago and have enjoyed the tranquil landscape. She said the large development will have significant impacts on residents in the area.

“This will impact hundreds of people that don’t live within 300 feet and didn’t receive the letter,” she said. “They want 924 living units. That’s 924 or more drivers, more kids in the schools and more short-term housing. We have enough of this kind of housing in Midwest City.”

Williams is also worried the new construction and pavement will increase stormwater runoff to her property.

“Our property is in a low lying area and what will happen if they build up the land for the development,” she said. “We planned to give our land to our children but what good will it be if it’s flooded.”

Gina Pointon, a Midwest City resident, has been helping collect signatures for the protest. She is concerned about the density of the housing development and the potential for increased crime in the area.

“They want to put houses on small lots that are almost like a mobile home lot,” she said. “And they’re adding all of that impervious surface with the Choctaw Creek spillway right in the middle of it.”

A formal protest requires valid signatures from at least 50 percent of the property owners that live within 300 feet of the development. If the city receives a valid protest, the proposal would need a super majority vote of the city council for approval.

The zoning request is scheduled to be heard by the Planning Commission on Nov. 2 and the City Council on Dec. 14.

Another apartment complex is planned for property just east of the Summerview development. The Fox Pointe at Choctaw development would include 526 one and two-bedroom units, an 18,000-square-foot clubhouse, three swimming pools, basketball and tennis courts, and other outdoor amenities. The development is located in Choctaw city limits and bordered by Midwest City on the north, south and west. The Choctaw City Council on Oct. 19 approved a specific use permit for the development.

Both the Summerview and Fox Pointe developments are located in the Choctaw-Nicoma Park school district.

The Boulevard at Lakeside apartment complex, 11300 SE 15th St., was built in 2016 despite strong opposition from residents in the nearby Oakwood East neighborhood.

Shaz Investment Group could not be reached for comment before press time.