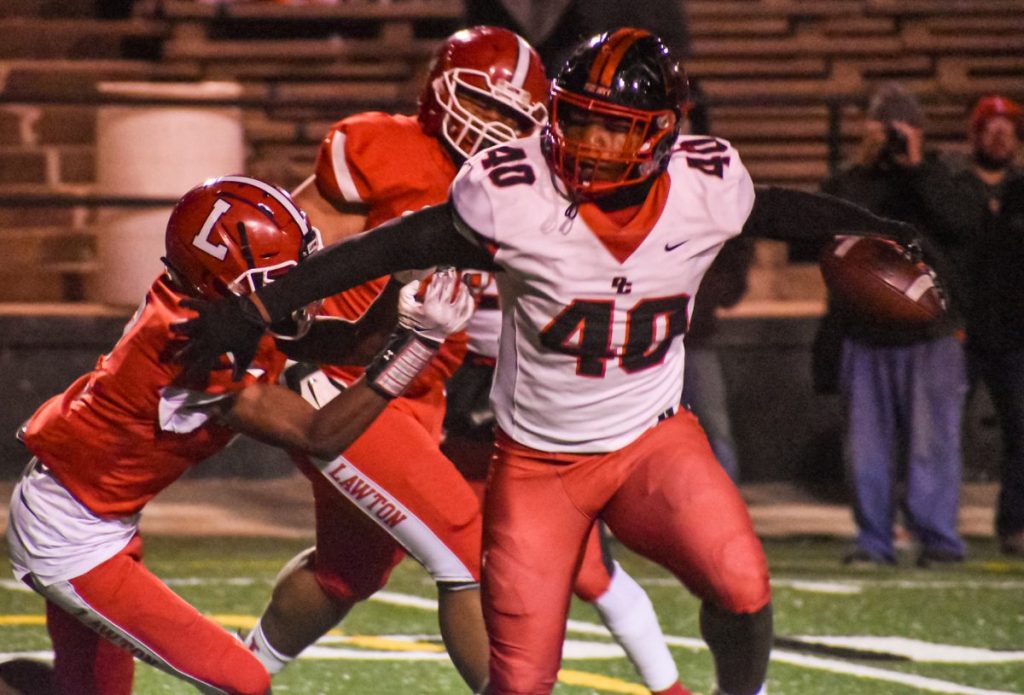 Jayson Smith carries the ball against Lawton. (Photo by David Do)

Del City didn’t have anything on the line last Thursday night against Lawton in the regular season finale.

The Eagles (9-1, 7-0) had already locked up the District 6A-II-1 title a week earlier, while the Wolverines were fighting for their playoff lives.

But it didn’t show.

After giving up an early score, Del City reeled off 62 straight points in a 62-35 win over Lawton (4-6, 3-4) at Cameron Stadium.The Wolverines were eliminated from the playoffs.

The Eagles fumbled on their opening drive, which led to a Lawton touchdown. Quarterback Davarius Hardy scored on a short run for a 7-0 lead.

Del City tied the score on an 11-yard run by Smith on the next drive. They later took control after forcing back-to-back turnovers.

Aaron Carter scooped up a fumble which led to a touchdown run by Yates. On Lawton’s next possession, Brian Stocker punched the ball loose and Joquan Howard recovered. That set up Yates again for a 26-yard touchdown run and a 20-7 lead.

Yates found the end zone one more time in the opening quarter when he hit Sweet on a 32-yard touchdown score. That gave Del City a commanding 27-7 lead after one quarter.

Del City added to its margin with a pair of touchdowns in the second quarter. Smith ran for his second touchdown of the game, and Jaylin Sweet caught a deep touchdown pass for a 41-7 halftime lead.

The Eagles continued to hit the gas in the third quarter. Ethan Lawrence and Smith ran for scores and backup quarterback George Gouldsby, making it a 62-7 score.

Lawton mounted a comeback with four scores in the fourth, but Del City held on 62-47.

The Eagles will host Sand Springs on Friday in the first round of the 6A-II state playoffs.