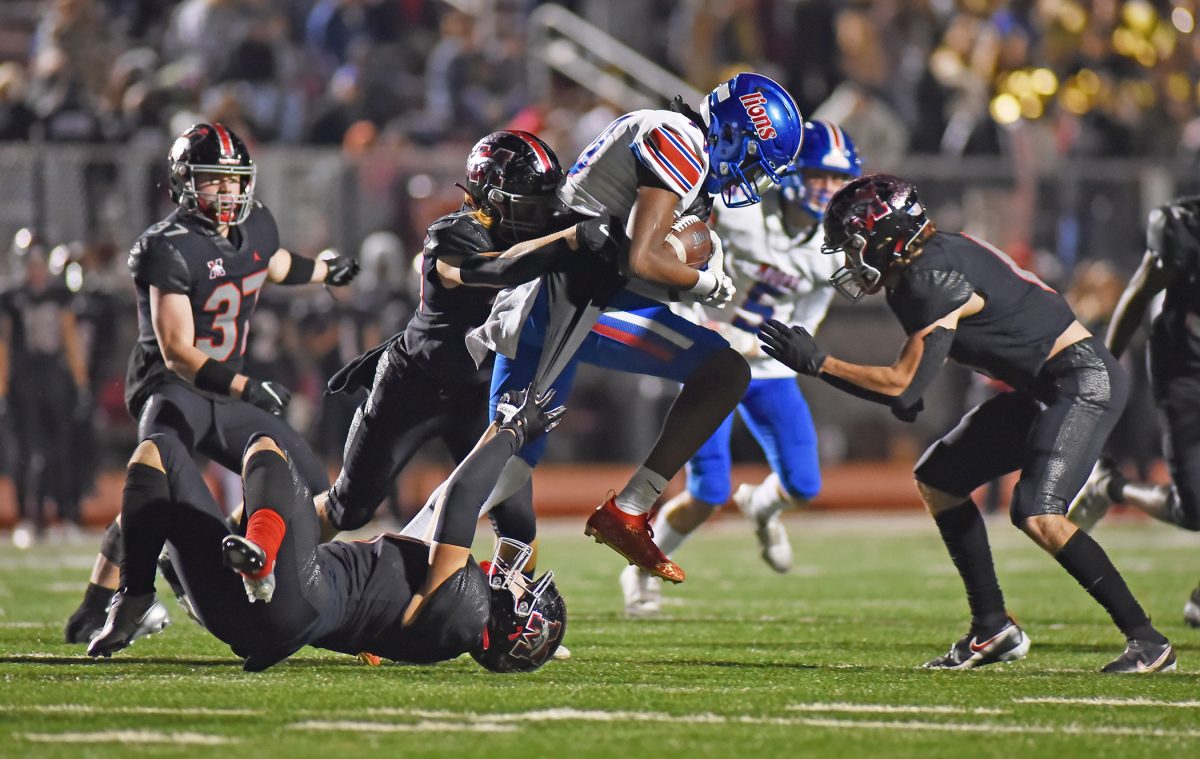 Mustang defenders wrap up a Moore ball carrier during a game Friday night at Bronco Stadium. (Photo by Alan Chapman)

If ever a football game resembled a ping pong game, it was last Friday night as the Moore Lions defeated the Mustang Broncos 44-41 on a Liam Evans 25-yard field goal with four seconds remaining.  The teams traded body shots the whole night, the game producing seven lead changes and six ties before time ran out. When the clock finally ran down to zeros, everyone in the stadium needed to catch their breath. For the Broncos, it was just one more wacky finish in a season full of wacky finishes. The Broncos, who had already clinched a home playoff berth, ran their overall record to 6-4 with a 5-2 district record. The Lions moved to 7-3 on the season and 4-3 in district and will not move on to the playoffs.

The 4th quarter started with a 28-28 tie after a lackluster 3rdquarter for both teams. Moore scored the first TD of the quarter on a run by Lonato Henderson, taking a 35-28 lead. The Broncos tied it up at 35-35 with 9:17 to play on a six-yard run by Jay Bedford. After holding Moore on the next drive, Mustang scored on a two-yard run by Tristen Russell. The extra point attempt was no good, so that made the score 41-35 with 1:40 to play in the game. The Lions came roaring back with a 71-yard run by Rejond Hayes that brought the score to 41-41 with the extra point pending. Remarkably for the Broncos, Evans pulled the kick to the left and the score was tied at 41 with 1:16 to play. Mustang was unable to move the ball, and the stage was set for Evans’ game winning field goal.

The first half was a track meet, with both teams scoring every time they had the ball except for a meaningless punt with 20 second to go in the half. 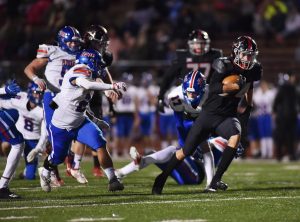 Mustang’s Jacobe Johnson runs after a catch during a game against Moore last Friday night. (Photo by Alan Chapman)

Mustang was the first to get on the board in the opening period on an eight-yard run by Pryce Burgess with 9:03 left. The Lions answered right back on a seven-yard pass from Denver Wolfe to star receiver Marcus Dawkins with 4:37 to play. Mustang scored again quickly with 3:27 on the clock on an 18-yard pass from Russell to Jacobe Johnson, making the score 14-7 at the end of one.

The Lions struck first in the 2nd quarter, Wolfe connecting with Lonato Henderson on a five-yard pass with 8:16 remaining in the 2nd.  The Russell to Johnson combination struck again with 7:35 to play on a 57-yard strike, making the score 21-14 in favor of the Broncos.  Moore answered again with a one-yard run by Hayes with 2:48 left in the half and tying the game at 21. Mustang took the kickoff and ran the two-minute offense to perfection, scoring on a one-yard plunge by Bedford with :49 to play until intermission. The amazing display of offense in the first half produced zero punts for either team. Mustang had four possessions and scored four touchdowns. Moore had the ball three times and scored three TDs.

In stark contrast to the 1st and 2nd quarters, the 3rd quarter produced zero points and five punts until the 1:16 mark, when Wolfe broke loose on a 69-yard scamper, making the score 28-28 heading into the final period.

The Broncos outgained the Lions 520-499 with Mustang using a more balanced attack than the Lions, who rushed for a whopping 349 yards. The Broncos had 286 passing yards and 234 on the ground, with Russell again providing the spark to make the offense run.  Bedford led the Broncos in rushing with 105 yards on 13 attempts and scored two touchdowns. Pryce Burgess added 47 yards and a score, and Chaz Bradley chipped in with 42 yards. Through the air, Russell was 13-19for 281 yards and two scores.  Johnson led the receiving corps with 160 yards on seven catches and two touchdowns. Keegan Bass also caught seven balls for 126 yards and rushed for 25 yards on three attempts.

Mustang Head Coach Lee Blankenship saw a lot of good things from his team but knows they can play better. “By all means we want to go out and win every game, but we just didn’t play well enough to win tonight, “ said Blankenship. “When you put the ball on the ground as much as we did, we didn’t deserve to win. You have to tip your hat to Moore, they are a very good 7-3 team that deserved to win.  But from here, our eyes are on the first playoff game next week and I can guarantee we’ll give it our best shot.” 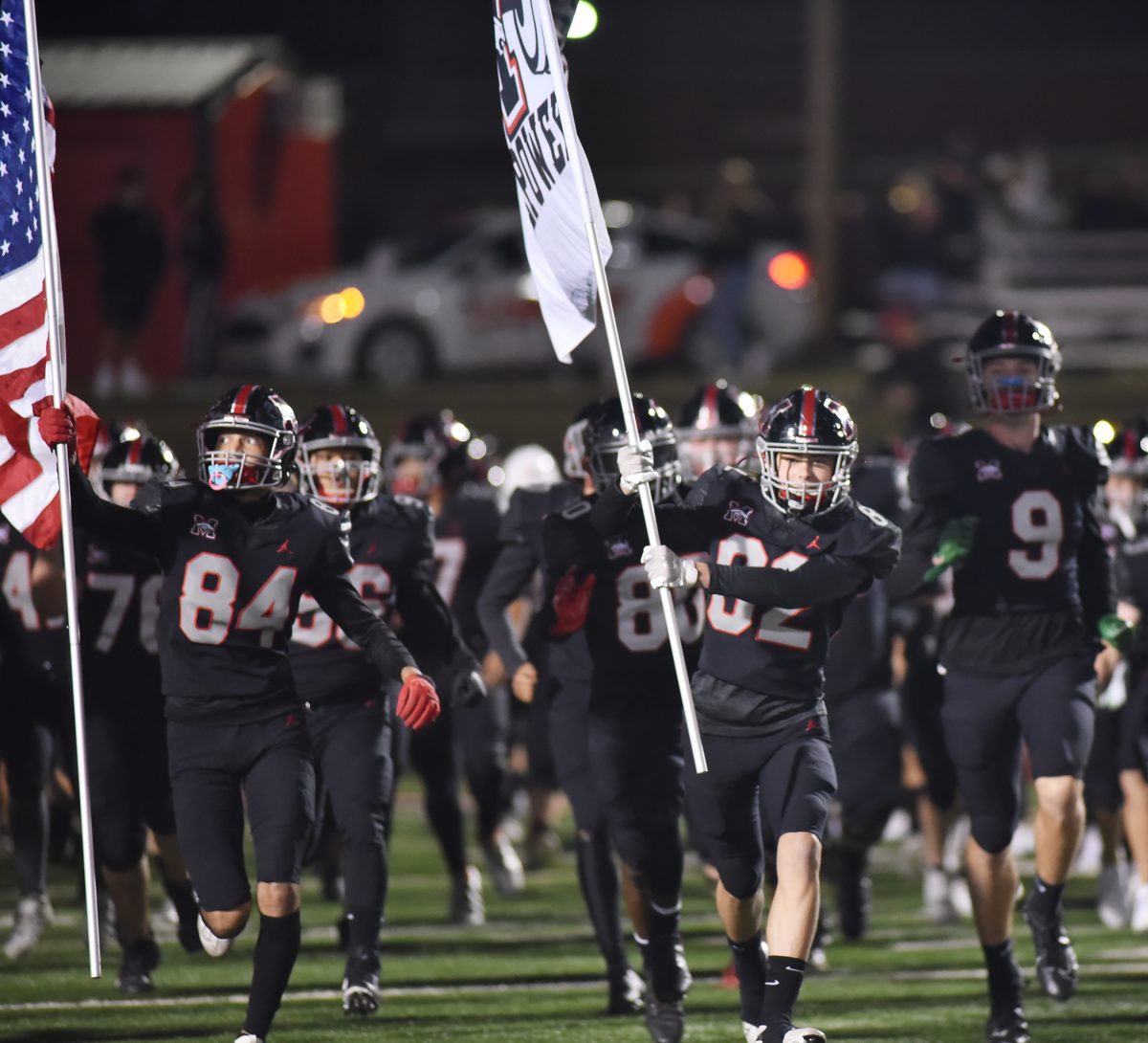 Mustang football players run out onto the field last Friday night before a game against Moore. (Photo by Alan Chapman)