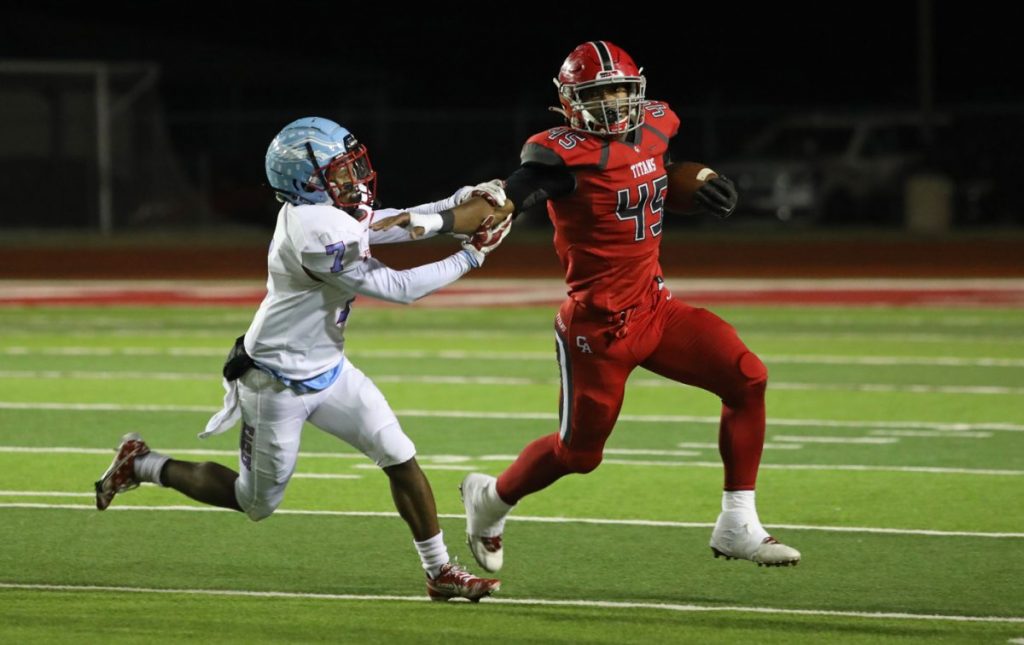 The five-time Class 5A defending State Champion Carl Albert Titans are the undefeated District 5A-2 champions and will host the first two rounds of the OSSAA playoffs, just like old times.

But there were some anxious moments for Mike Dunn and his Titans before they killed the clock  with a time-consuming fourth quarter drive to wrap up a 21-14 decision over the Lawton Eisenhower Eagles.

Their eighth straight win completed a clean slate in district play at 7-0 and set up the home field advantage.

Freshman Trey Washington boomed a 48-yard punt to push Ike back to the 23, Ike monster back Trevaughan Walton rammed the ball up the middle, the Eagles picked up a questionable (aren’t they all?) pass interference, suddenly the Eagles were at the CA 5.

Quarterback Will Trachte was flushed out of the pocket trying to pass but managed to scramble into the end zone and Also Hernandez added the PAT and the scoreboard showed the Titans ahead, 21-14 with five minutes left on the clock.

Hernandez boomed the kickoff into the end zone, giving CA the ball at the 20. 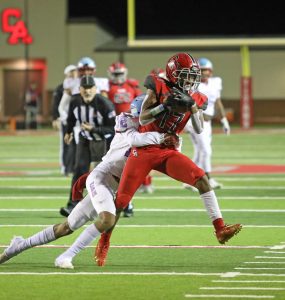 Xzavier Thomas makes a catch during a game against Lawton Eisenhower on Nov. 5. (Photo by Jeff Harrison)

Enter Buddy Bizzell, who spent the majority of the game concentrating on defense while soph Xavier Robinson, who scored two touchdowns, handling the running back chores.

But it was all Bizzell from there on, with excellent blocking from his buddies up front.

The Trojan Horse, the Buddy Dozer, the Bizzell Bell, whatever you call it, it is very simple. The Titan front wall lines up shoulder pad to shoulder pad and Bizzell take the direct snap and plunges forward.

With the clock slowly ticking away, Bizzell took 11 snaps in a row and covered 76 of the 80 yards before the final horn signaled the end of the contest. That final burst gave him 115 yards rushing on limited carries.

The Titans wasted no time getting on the board to begin the third quarter of play.

Xzavier Thomas picked up 34 yards on the kickoff to push the ball out to the 39.

Reed DeQuasie and Xzavier Thomas took over from there.

Thomas lined up on the left flank, made a spectacular catch and moved the ball 40 yards, all the way to the Ike 21. Then Thomas moved over to the right side and DeQuasie hit him in stride for the 21-yard TD. Jacob Eddy made it 21-0.

But Walton went over from the two late in the period and Trachte’s TD narrowed the gap to 21-14 and set the stage for Buddy Ball.

The Titans led at halftime, 14-0, and came close to another score.

After DeQuasie connected with Xavier Robinson for an apparent 19-yard touchdown with just over a minute left on the halftime clock, the dreaded yellow flag came fluttering in to negate the TD.

Then to make matters worse, the Eagles intercepted a pass at the 21. But Brock Johnson came up with a huge defensive stand for the Titans, sacking Ike quarterback Will Trachte for a seven-yard loss to force a punt.

With just 15 seconds left, the Titans took a knee to go regroup in the dressing room.

The Titans forced Ike to punt on the opening possession of the game and DeQuasie connected with freshman Trey Robinson for a 37-yard beauty to establish a first down.

The Titans reached the 31 before a fourth down pass was incomplete.

Xzavier Thomas and Demarion Brown came up with back to back defensive gems to force a punt, which only traveled 13 yards to give DeQuasie the ball at the 40.

DeQuasie hit Brown for 19 and then lofted a beauty in the flat to Bizzell for the 1 yard touchdown and Jacob Eddy celebrated his return from the injured list with the PAT.

James was in the right place at the right time on the kickoff as the ball bounced off an Ike player and James pounced on it just 37 yards from the goal.