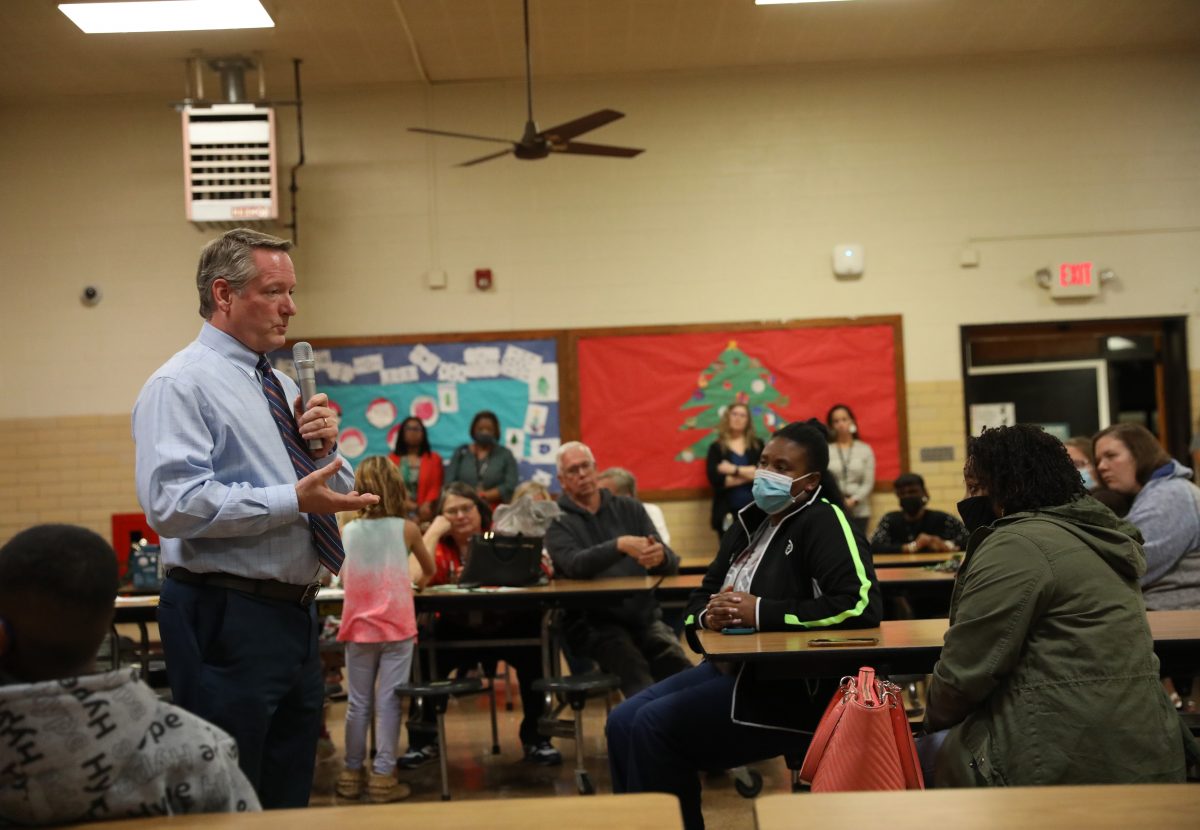 Superintendent Rick Cobb is recommending the district close Steed Elementary and Highland Park Elementary at the end of the current school year. According to the proposal, students who currently go to Steed would attend Soldier Creek Elementary, Midwest City Elementary or Ridgecrest Elementary.

Last Thursday, the district hosted a community meeting at Steed Elementary School to discuss the proposal and answer questions from parents and community members.
Almost 100 people attended the meeting – many who disagreed with the district’s proposal. People were concerned about how Steed’s closure would impact class sizes, bus routes, staffing, services for students with special needs, and possible additional school closures.

Cobb gave an overview of the district’s process in determining to close Steed and Highland Park. A performance review recommended closing as many as four elementary schools. The district later commissioned a demographic study that provided detailed information about enrollment patterns and housing projections.
The school performance review study identified Steed, Highland Park, Parkview, Ridgecrest, Cleveland Bailey and Country Estates as candidates for closure. The list of six schools was narrowed to two – Highland Park and Steed.

Steed Elementary, 2118 Flannery Dr., was selected due to its proximity to two newer school buildings and the main runway at Tinker Air Force Base, and property ownership. The City of Midwest City owns the Steed property, which is adjacent to Joe B. Barnes Regional Park.

Cobb also presented neighborhood maps showing which schools students attend. He pointed out that several students that attend Steed live outside of the attendance boundaries. And others live in the Steed area but transferred to other schools.

The proposal would allow students to move from one of the oldest schools in the district to the most modern ones.

“If we decided to close no schools, then what are we going to do to make all of our classrooms more like our best classrooms because I think that’s the equity issue we need to be talking about,” Cobb said.

Several people asked how the school closure would impact class sizes at other schools. Cobb said Soldier Creek and Midwest City Elementary, which both opened in 2014, have adequate space for additional students and will offer a modern learning environment. Both schools have room for an additional six teachers per grade level. And the district will continue to limit class sizes.

Teachers at Steed will be guaranteed a job next year with the district. Cobb said they usually have more than 100 openings every year. Cobb said they will try to find where they have capacity for their special education programs and try to continue in the same school feeder alignment in the future.

Cobb said they are still exploring transportation issues in the district. He said they will likely have to add one or two more routes to accommodate the consolidation.

A parent asked if Ridgecrest Elementary could be closed in the near future.

Several parents expressed nostalgia for the school and how its loss would have on the neighborhood.

The proposed plan to close Steed and Highland Park must be approved by the board of education. The board is expected to consider the matter at their Dec. 13 meeting.