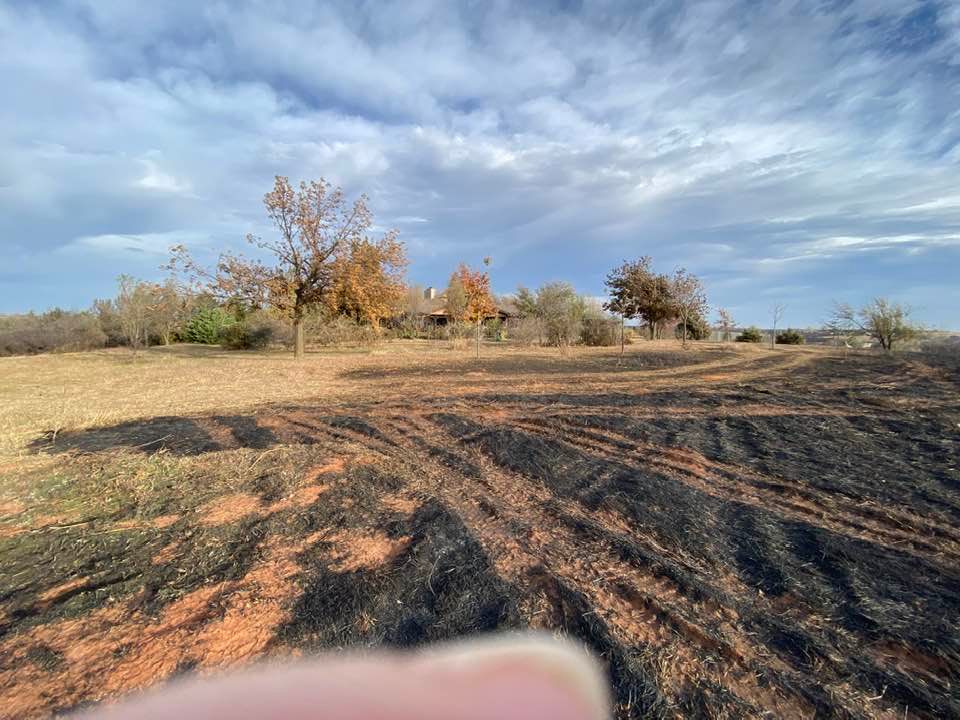 Photos taken in the aftermath of a Nov. 23 grassfire near Calumet show how close it got to residences in the area. Officials estimate about 600 acres were burned in a blaze begun when someone lit an outdoor trash pile in extremely dry conditions with strong winds blowing. Photo by Ruthie Pugh

After two separate fatality house fires in Yukon and a massive grass fire that swept across parts of western Canadian County in November, officials are urging caution both inside and outside their homes.

“It’s kind of a double problem – we have extremely dry conditions with intermittent high winds and a lot of brush, and we have people who are putting up their trees, and those can get dried out quickly, as well as just the normal heading inside, using space heaters and the like,” Board of Canadian County Commissioners Chairman Jack Stewart said last week. “Our suggestion is to steer clear of outdoor burning and to be especially vigilant with holiday decorations, candles and anything else that could turn a happy holiday into a horrible situation.”

The two deadly house fires occurred just days apart in Yukon. An unidentified woman died in a Nov. 9 blaze that engulfed a home in the 10600 block of NW 34th Terrace. Investigators have not yet released the cause of that fire, they said Friday – nor has there been any update concerning the origins of a second incident that occurred Nov. 13.

That fire involved a home near SW 15th Street and Sara Road. Officials said while one person was rescued, an unidentified man was located deceased inside the residence.

Officials said a Nov. 23 grassfire luckily did not destroy any homes or cause any injuries, but it did burn about 600 acres in western Canadian County. The fire started near Karns Road and Route 66 north of the Cherokee Truck Stop in Calumet – after an individual began burning an outside trash pile that included a mattress and other materials.

At the time the trash pile was set alight, winds were blowing about 40 miles per hour and the surrounding area was overgrown with tall grass, Canadian County Emergency Manager Andrew Skidmore said.

“It was a bad idea to start any kind of fire in those conditions – between the dryness, the underbrush and the wind, it was a recipe for disaster,” he said. 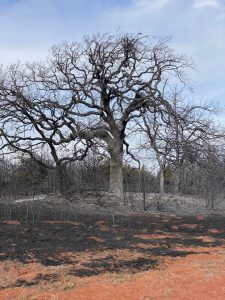 Photos taken in the aftermath of a Nov. 23 grassfire near Calumet show how close it got to residences in the area. Officials estimate about 600 acres were burned in a blaze begun when someone lit an outdoor trash pile in extremely dry conditions with strong winds blowing. Photo by Ruthie Pugh

“We really dodged a potentially very bad situation as the fire spread north from the point of its origin,” Stewart said. “The combined response really saved the day.”

That combined response came from three task forces and 19 fire departments from Canadian, Custer and Blaine counties; personnel from about 15 oil companies working in the area also responded, Skidmore and Stewart said.

“It was a great example of a truly unified response – we had Devon, who brought several thousand gallons of water with its tankers to the scene and a lot of help offered by volunteers just wanting to be there for their community.”

While there were no burn bans in effect across Oklahoma as of press time – except for Cimarron and Texas counties in the far western panhandle – officials urged everyone to be vigilant both inside and outside.

“We have a lot of dry underbrush and there’s no good news on precipitation on the horizon as of right now,” Stewart said. “It’s important everyone keep in mind how quickly a fire can spread and how truly dangerous it can be – these conditions make it extremely, extremely hazardous right now.”

Fire dangers weren’t just something for those living or working in more rural areas to be concerned about, officials said. Oklahoma City Fire Department reported Monday it had dealt with 29 separate fires in three days, several of them grass fires, but also an early morning Dec. 6 apartment blaze in Northwest Oklahoma City.

Three apartments were damaged but no one was injured in the fire, Oklahoma City Fire Department officials reported late Monday.

“This is a time of year that’s always worrying because of Christmas trees, lights, candles, fireplaces and the like,” Mustang Fire Department’s Capt. Andy Willrath said last week. “When you throw in the adverse conditions we’re seeing – with the dryness, the winds, the among of underbrush – we are urging everyone to be especially cautious.”

Cooking fires are also a concern at the holidays, with National Fire Protection Association reporting the vast number of house fires that started due to cooking annually were Thanksgiving, Christmas Eve and Christmas Day.

The association offers a host of in-depth safety tips for safe holiday decorating and more. Those can be found online at https://www.nfpa.org/Public-Education/Fire-causes-and-risks/Seasonal-fire-causes/Winter-holidays.