Local first responders recently took time to celebrate the holidays with some youngsters they consider to be hometown heroes.

The Eastern Oklahoma County Chief’s Association hosted their inaugural Holiday with Heroes event on Dec. 14 at 6 p.m. at the Walmart Supercenter in Choctaw, located at 14185 Mack Harrington Dr. 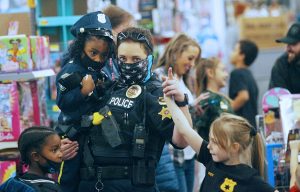 The night started with a parade of emergency vehicles arriving at Walmart shortly before 6 p.m.

After officers, troopers, deputies, firemen and other first responders parked their vehicles they were teamed with a child or family to shop.

EOC area first responders had prepared for 100 youngsters, but just over 80 made the event.

Each child had the opportunity to shop with $100 to provide them with a special Christmas they might not otherwise get to experience.

Additionally, Kensley Graham had $500 to shop for the Children’s Closet at Stephenson Cancer Center. After radiation treatments, patients can go to the closet to choose a gift.

Kensley and her mother Tawny commented that the closet was getting bare. A total of $15,666 was collected from the eastern Oklahoma County community for this united effort.

By the end of the night $10,628 was spent to make a memorable evening for all participants. Left over funds will go towards next year’s event, and coordinators say they’ll begin planning earlier to ensure that second effort is bigger and better with more meaningful impact in this community.

After shopping, families were invited to the Choctaw Creek Park to enjoy a train ride and photos with Santa. Volunteers from the Choctaw Student Council and Eastern Oklahoma County 4-H club will assist with these events.

“The Eastern Oklahoma County communities and businesses as a whole have been amazing. One citizen baked cookies for all the children and supplied bath bombs if they choose. Citizens have dropped off checks and local businesses’ have stepped forward to completely finance this event,” said Choctaw police chief Kelly Marshall.

“As law enforcement officers we recognize the last several years have been stressful in many ways to the children in our community, this is our way of treating ‘our heroes’ to a night of shopping and fun,” said Marsahll.

Gary Morgan, Chief of the Harrah Police Department and current President of the Eastern Oklahoma Chiefs Association, was pleased with the large turnout.

“The community came together and donated enough to make a lot of happy kids. All of the different departments were here from the east side,” said Morgan. “This was our first year to do the holiday with the heroes for the Eastern Oklahoma County Chief’s Association. A lot of people came together and there’s a lot of smiling kids and happy parents.”

The Eastern Oklahoma County Chief’s Association is an alliance of area first responders that work together to better serve the lesser funded regions of the community.

“We have nine agencies out here on the east side, and we pull our resources and can have a louder voice. The sheriff’s department has put together, with all these east side agencies, a task force for investigation, and we started an east side emergency response team with officers from all agencies assisting,” said Morgan. “Together with help from all nine agencies we’re improving our communities out here.” 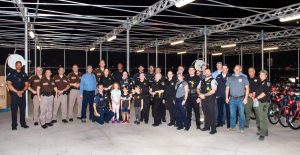 For more photos check out our complimentary photo album HERE