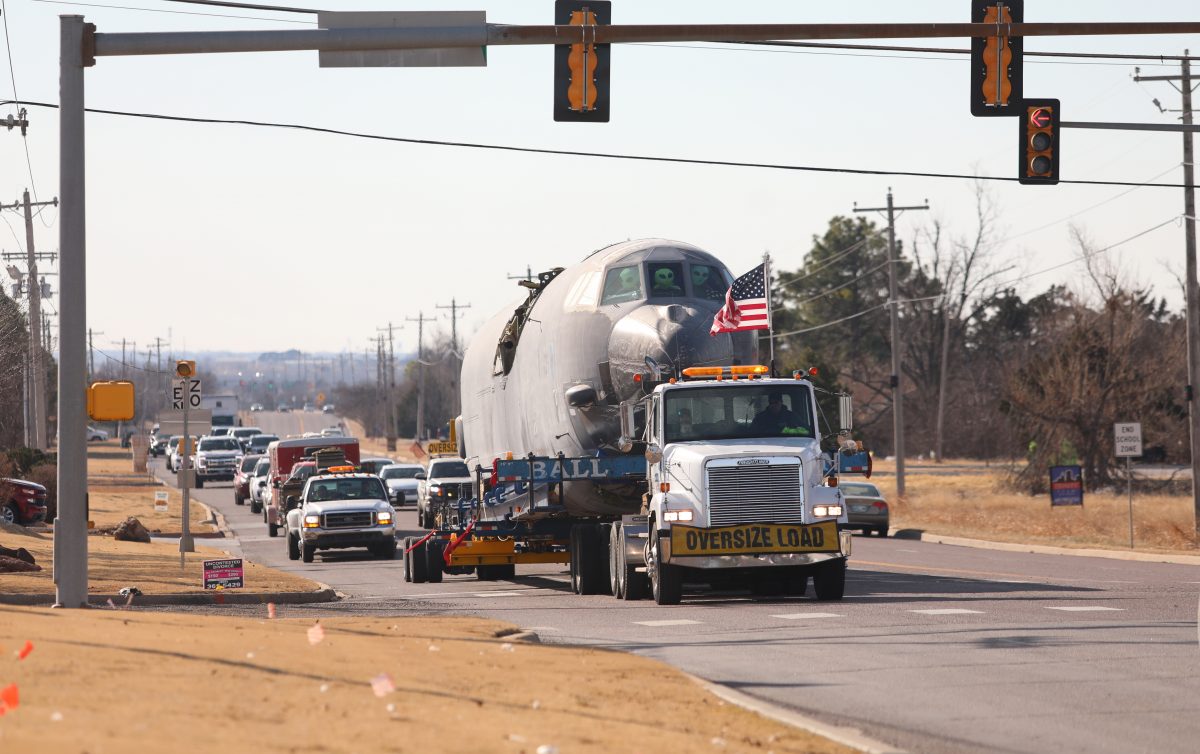 A B-52 makes its ways down Sooner Rd. in south Oklahoma City on Saturday. Photo by Jeff Harrison

Aircraft to serve as tool in fleet modernization

The B-52 Bomber has been a workhorse for the U.S. Air Force for more than six decades.

Soon the iconic aircraft will receive upgrades that will keep it flying for years to come.

On Saturday morning, a decommissioned B-52, known as ‘Damage Inc. II,’ arrived at the Boeing facility in Oklahoma City where it will serve as a test prototype for modernization efforts. Boeing has been contracted to modernize the B-52 fleet, including upgrading the engines.

“To be able to work on something as iconic as the B-52 and to be able to modernize it to bring it into the 21st century and keeping it flying to 2050 and beyond is very exciting for the Boeing family,” said Jennifer Wong, bombers program director.

The aircraft was transported to Oklahoma City from Davis-Monthan Air Force Base in Tucson, Arizona. Crews hauled the aircraft through southern Arizona, New Mexico and Texas before crossing into Oklahoma on Thursday. It finished the final leg of the three-week trip Saturday morning as crews carefully pulled it into the Boeing facility parking lot near Tinker Air Force Base.
Several people have followed the B-52 on its journey across the country.

“It’s really exciting to see the number of people who have come out to support Damage, Inc. II as it has come across the country,” said Col. Louis Ruscetta, Senior Material Leader, B-52 System Program Office at Tinker Air Force Base. “It’s not surprising when you understand the historic aspect of the B-52 and the role it’s played in American air power.”

Wong said many veterans have a close connection to the aircraft.

“This platform has been flying for many years so because of that there are many veterans who have flown on, work on or worked with the B-52, so the BUF community came out and we’re proud,” Wong said. “We saw a lot of vets lining the street with flags and we had a lot of people at the Boeing Company come join to watch the aircraft finally make its place here in Oklahoma City.”

The aircraft will be moved inside the building and reassembled. A portion of the wall will need to be removed to bring the aircraft inside. Engineers will then begin the process of integrating new F130 engines and upgraded radar equipment that will give the 60-year-old aircraft the power, range and speed necessary to remain mission ready through 2050 and beyond.

“The benefit of having this asset here is we’ll be able to bring in the design engineers, the manufacturing engineers, the training and support folks with the customer community and suppliers all co-located to the aircraft so we can look at the design and make sure we’re making the correct design decisions,” Wong said.

The B-52 was designed and built by Boeing in the 1950s and has been in use by the Air Force since 1955. The aircraft can fly high subsonic altitudes and can carry nuclear or conventional weapons. 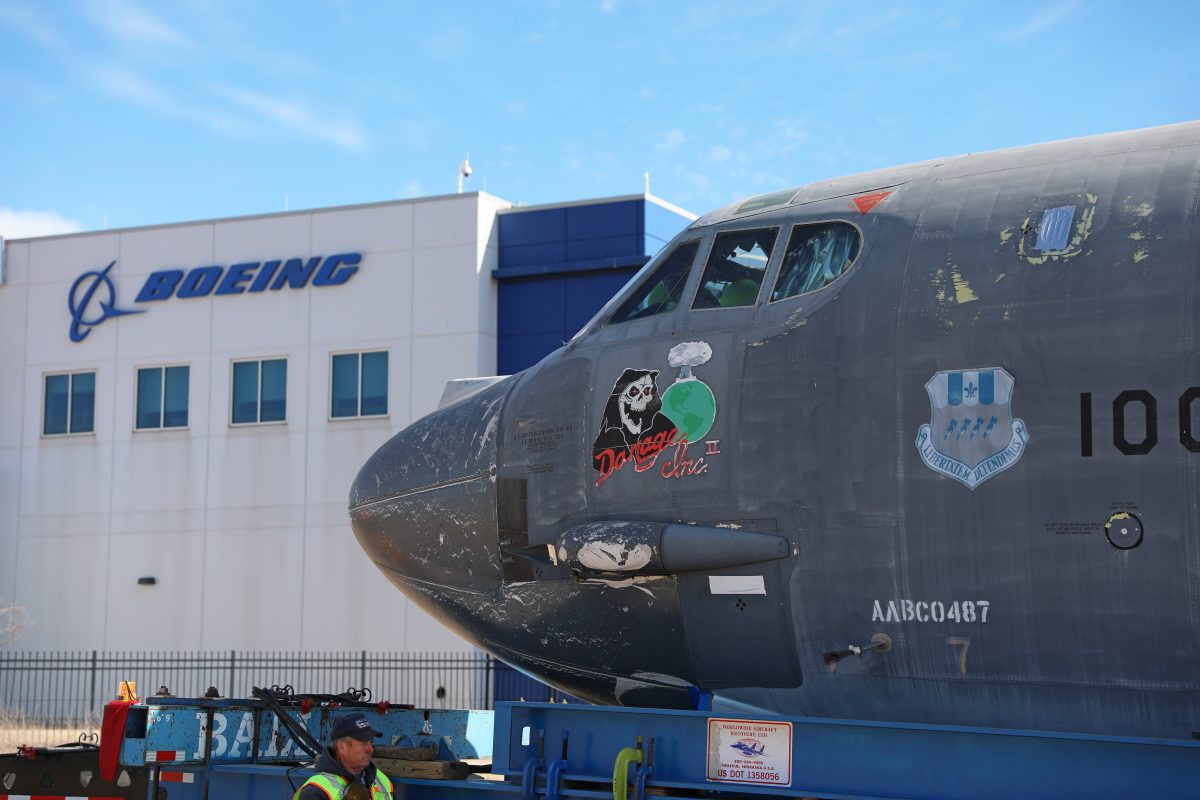 A B-52 Stratofortress, known as “Damage Inc. II,” completed its nearly 1,500 mile month-long trip from Arizona to Oklahoma on Saturday morning, when it arrived at the Boeing facility near Tinker Air Force Base. The aircraft will be reassembled and used as prototype for modernization efforts on the B-52 fleet. Photos by Jeff Harrison 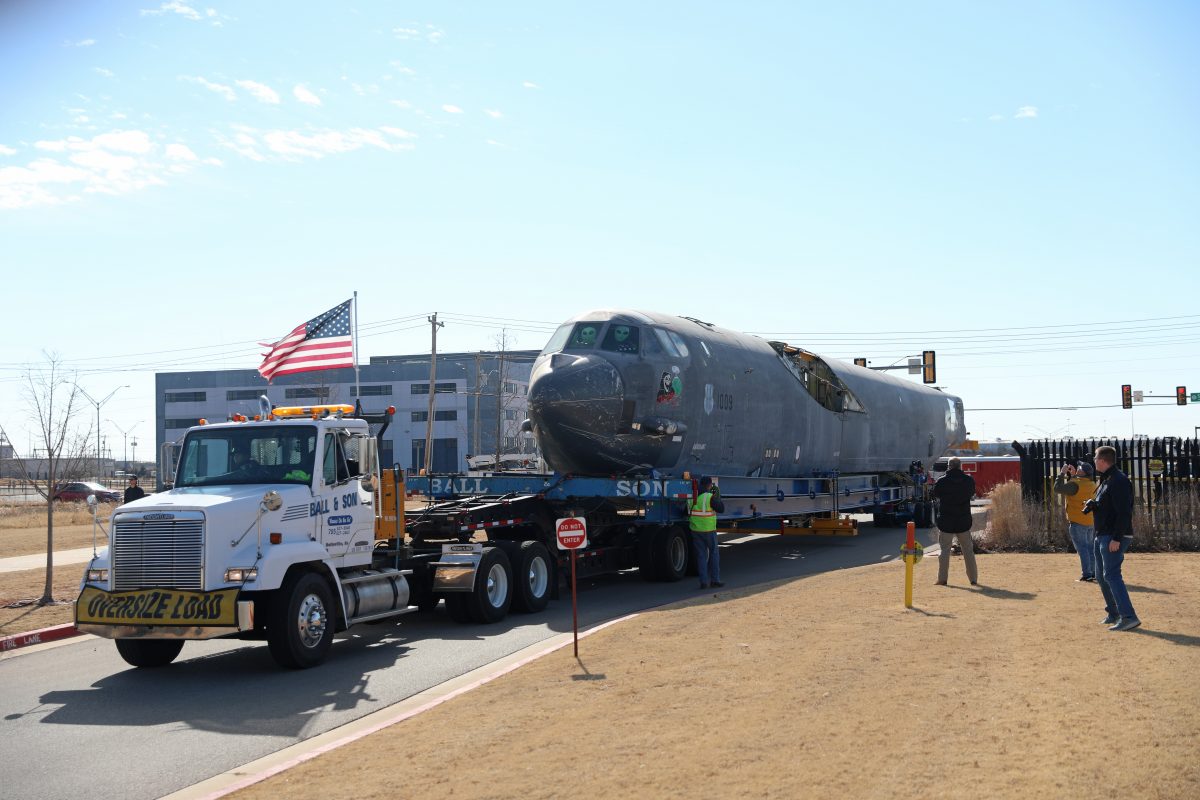 A B-52 Stratofortress, known as “Damage Inc. II,” completed its nearly 1,500 mile month-long trip from Arizona to Oklahoma on Saturday morning, when it arrived at the Boeing facility near Tinker Air Force Base. Photos by Jeff Harrison