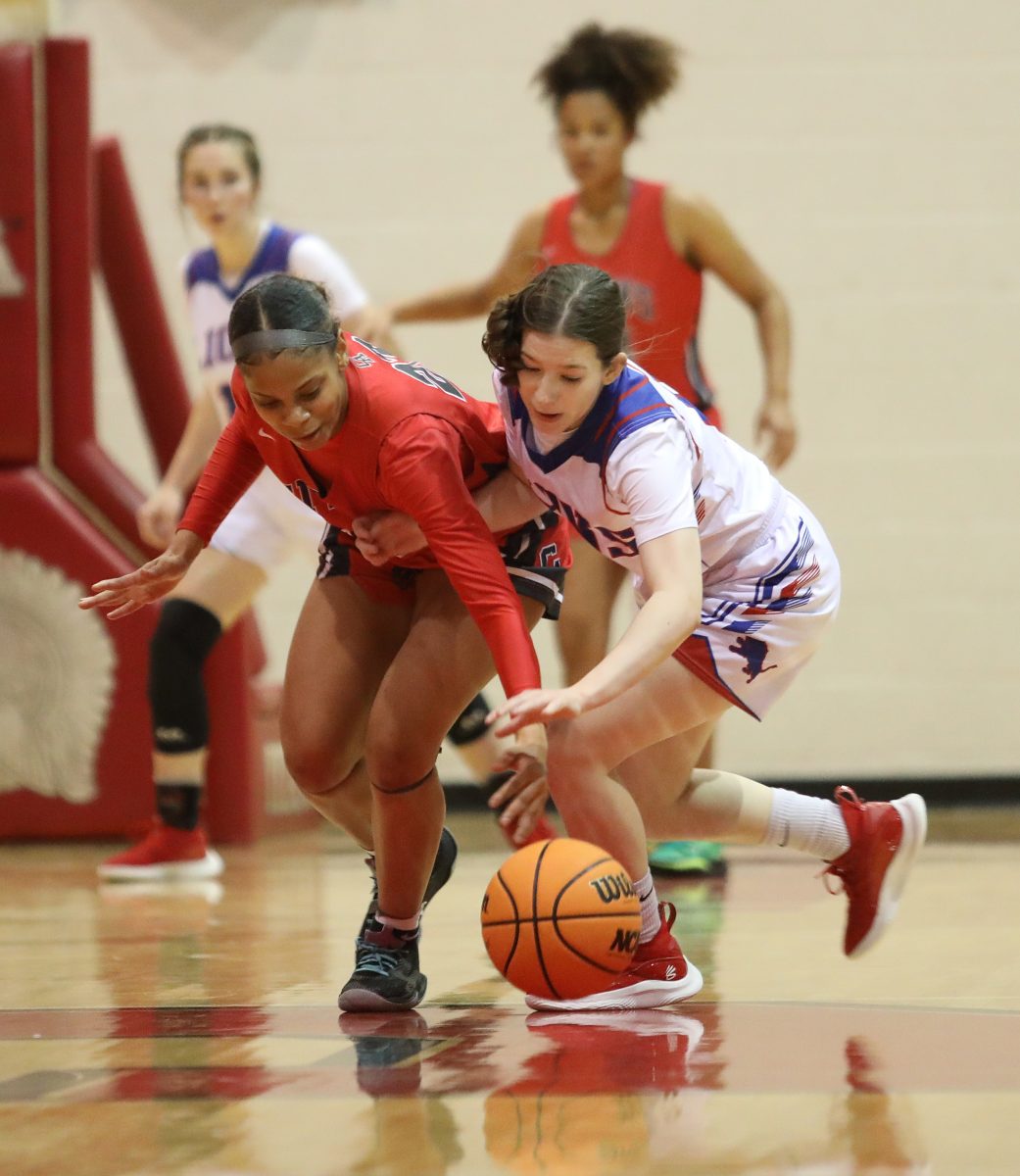 Carl Albert’s Azya Poole tries to grab a loose ball during a game against Durant. Photo by Jeff Harrison

The Carl Albert Lady Titans ran into a hot shooting Edmond Memorial in the finals of the Titan Tournament and lost a 66-49 contest in the championship finals.
The No. 1 ranked Class 5A squad, CA girls fell into a 20-9 hole after just one period of play and still trailed 36-18 at halftime.

In the third period, CA made a spurt as Mariah Taylor connected on three field goals and a free throw, Kamryn Sutton had a pair of treys and Ari Diaz and Azya Poole also had treys for 19 points, but Memorial also scored 19 to take a 55-37 lead into the final quarter.

Diaz had two treys, three field goals and 3 free throws to lead the Titans with 15 points while Taylor’s torrid third quarter boosted her total to 12 for the game. Sutton had 3 treys for 9 points and Azya Poole also had 9.

Chynna Macarthur and Saliyah Landon each had a bucket.

Kennedy Cofer downed back-to-back treys that ignited the Lady Titans to a 10 point burst just before halftime as CA downed a pesky Durant team, 54-46, in first round action in the tournament.
Carl Albert trailed, 15-13, after one quarter of play and still trailed, 23-21, with 2:11 before halftime when Saliya Landon sank a free throw, Azya Poole swished a trey from the top of the key and Cofer delivered the next two trips down the court to give CA a 31-25.

The third period was all CA as Poole came up with a layup after a steal and Kamryn Sutton delivered one of her four treys and Ariana Diaz added a traditional three-pointer and suddenly the Titans were 14 points ahead.

Sutton and Poole added back-to-back three’s and Maraia Taylor had a field goal as the lead grew to 47-30 going into the final period.
Poole had another trey in the fourth to give her 15 for the night and Sutton had a rare field goal to tally 14 points.

Cofer had 3 treys for 9 points, Landon had 6 and Diaz gad 5 points. Evi Mitchell and Taylor finished out the scoring for Kyle Richey’s club.

Westmoore became the latest 6A team to feel the wrath of the Class 5A No. 1 ranked Lady Titans as CA rallied from a second period deficit to post a 61-48 victory in Friday’s semifinal action.
At the 5:16 mark of the second quarter, the Lady Jaguars had seized a 19-17 advantage in Friday’s game. But Kennedy Cofer flipped in a trey, Landon had a field goal and two free throws and Azya Poole sank a layup for a 30-22 advantage at halftime.

Westmoore closed to within 30-27 before Kamryn Sutton hit a jumper in the lane and followed with two of her patented treys and Poole tossed in a traditional three and suddenly, the CA girls were up, 40-27.

Cofer added another three and Poole had a pair of free throws and it was 48-34 going into the fourth quarter where Kyle Richey emptied his bench.

Poole took scoring honors with 19 points while Landon had 14 points in the first half and added three free throws for 17 on the night. Cofer added four more treys to her treasure chest of three-pointers the past 2½ years.

Sutton had 8 points while Ariana Diaz, Jamya Battle and Maraia Taylor rounded out the scoring.

The Lady Titans will resume conference action Friday night when they journey to Piedmont. 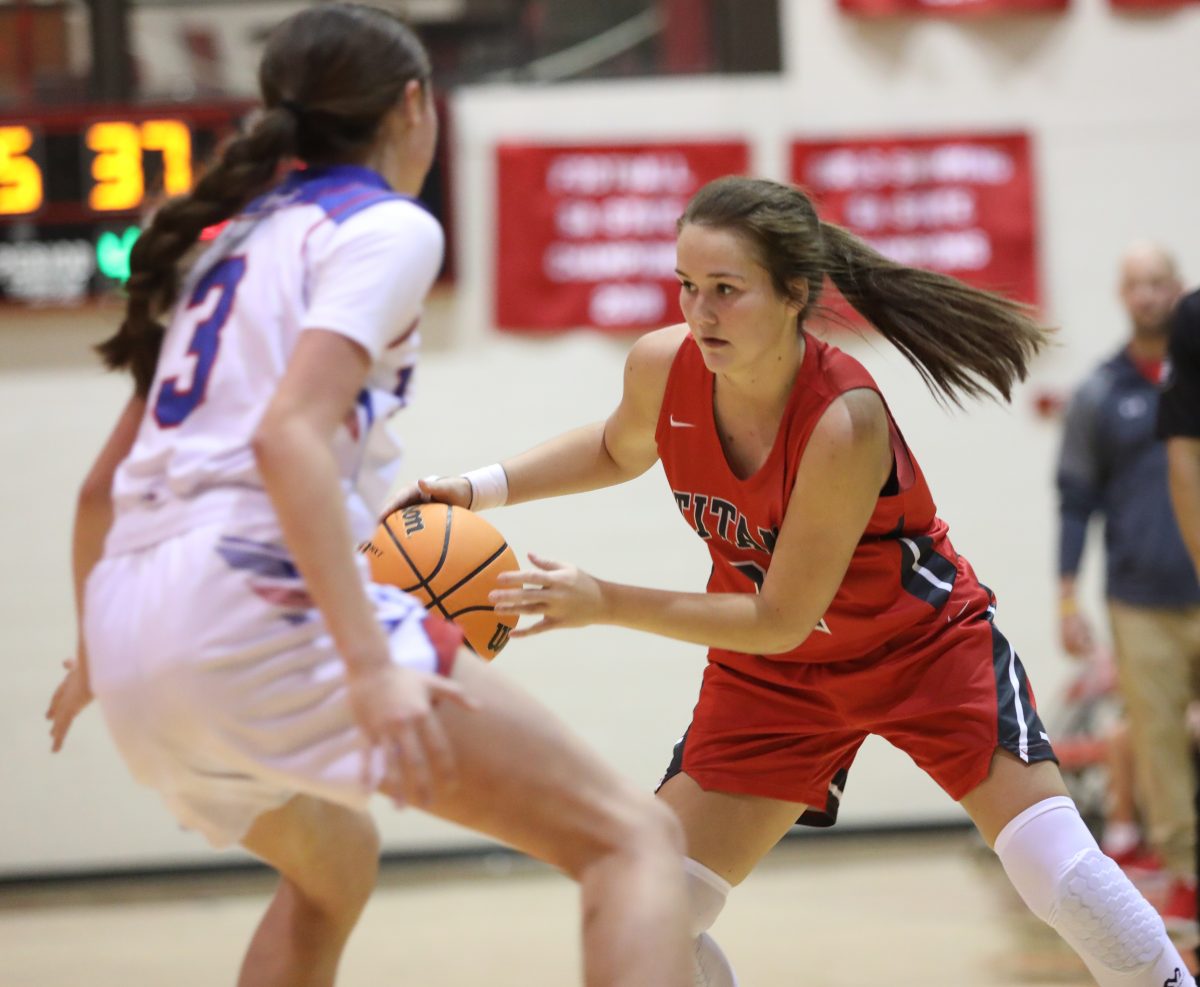 Kamryn Sutton tries to drive past a defender. Photo by Jeff Harrison