The indictment alleges that on June 22, 2019, Brandon Killian and Devan Johnson, aiding and abetting each other, willfully caused bodily injury to two victims because of the perceived or actual race of one of the victims, who is a Black man. The alleged attack occurred around 2 a.m. in the parking lot of the Brickhouse Saloon, in Shawnee. 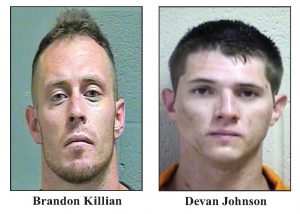 Witnesses told police the attack happened after an evening of drinking with friends.

The victims of the alleged racially motivated aggravated assault and battery were both 36 at the time of the incident. The victims are identified in the indictment only as J.C. and M.W. One was hospitalized, while the other refused medical treatment on the scene.

Choctaw’s Killian was 28 at the time of the alleged attack, while Harrah’s Johnson was 24.

Video of the incident was recorded by witnesses.

If convicted, Killian and Johnson each face a maximum sentence of 10 years in prison, three years of supervised release and a fine of up to $250,000.

The case was investigated by the Oklahoma City FBI field office. Assistant U.S. Attorney Julia Barry of the Western District of Oklahoma and Trial Attorney Avner Shapiro of the Civil Rights Division are prosecuting the case.

The public is reminded that an indictment is merely an allegation, and the defendants are presumed innocent unless proven guilty.