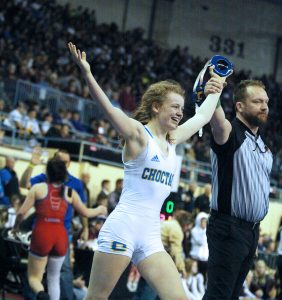 She avenged her only high school loss, that came just a week earlier at regionals, and more importantly locked in her third straight state championship.

“I’m feeling pretty good. I think that loss humbled me a little bit and gave me some momentum going into state,” said Hand. “It showed me something I needed to work on, and it felt great getting that one back.”

She was on the wrong side of a 7-5 decision in regional competition, but a week later she adjusted to hand that Purcell wrestler a 4-2 loss in the state semifinal.

Additionally, Hand took a tech fall in the state quarterfinal and secured a quick pin in the state final at 107 pounds.

Hand says growing up in the Choctaw program has set her up to compete with the state’s elite.

She’s been wrestling since age eight, and has earned a lot of experience against both male and female competition.

Since Choctaw doesn’t yet have a girls’ wrestling program, she regularly works and competes alongside the boys.

“I get a different look at things, and have to learn to adapt when wrestling someone stronger than me,” she said.

That hard work pays off as she’s rolled to a 49-1 career record against female opponents in high school.

Her freshman year Hand made history as the first ever female state wrestling champion when she dominated her way to gold in the lightest girls’ weight class.

She has now repeated with gold medals her sophomore and junior seasons.

She’s proven she can set and accomplish goals through hard work and dedication to her sport, and if she does indeed meet this next target, she’ll once again make history. 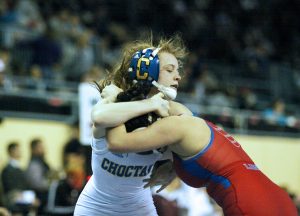 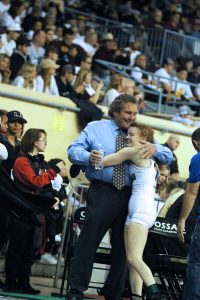 There have only been 44 four-time Oklahoma high school state wrestling champions.

Two have been CHS graduates (Kyle Garcia in 2012 and Zane Coleman in 2019) another four-time champ was Harrah graduate Matt Grice (2000) who joined the Choctaw coaching staff this season.

During the off season Hand will be training to reach her next goal, which would solidify her place in the history books as Choctaw’s third ever four-time champion and the state’s first female four-time champ.

“I’m really thankful for everything the Choctaw program has provided for me,” said Hand. “Benny Coleman is the best coach I’ve ever had, and I’m forever grateful.” 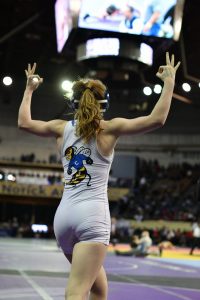 For more photos check out our ALBUM 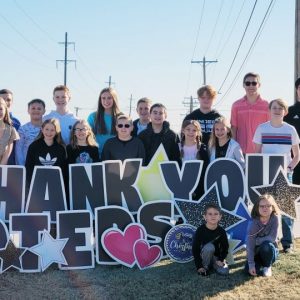 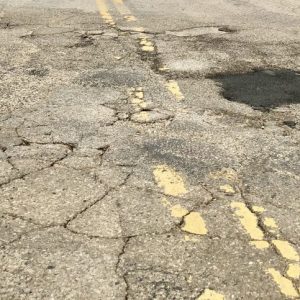