Choctaw High School had 10 wrestlers qualify for a trip to the prestigious Class 6A Oklahoma High School Wrestling Championships, Feb. 25-26.

After a weekend of competition at the State Fairgrounds Arena, Choctaw had three medalists. 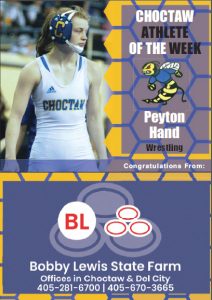 After suffering her first loss at the regional tournament, Hand was focused moving into her third state tourney.

In the semifinal Hand avenged her lone loss this season with a 4-2 decision over Purcell’s Coty Ses-sions.

She advanced to the 107-pound championship round where she made quick work of Moore’s Harley Stringer, pinning her in the first period. 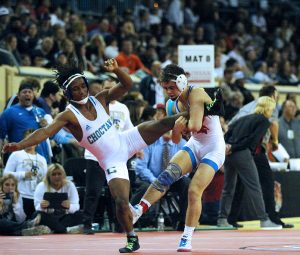 Shaun Muse ends up on the wrong side of a 1-0 decision in the state final. The CHS junior secured a silver medal. This is his third straight year to place at state. (PHOTO BY RYAN HORTON)

Bixby’s Jace Roller got away with the title when Muse was stunned by a 1-0 decision in the champion-ship round.

Muse opened with a major decision over Piedmont’s Alan Flores. He then beat out Landyn Sommer, of Stillwater, 5-2.

This was Muse’s third trip to state after taking third both his freshman and sophomore seasons.

“He lost a 1-0 match and that’s tough. I think we beat him by one last time, and he got us this time.” said Coleman. “Last year he lost in overtime to keep him out of the final. It’s tough at that weight and he wrestled really good.” 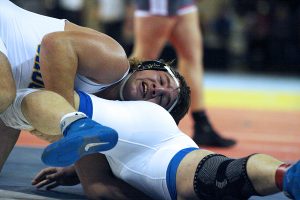 Choctaw’s Cory Monrow works for a bronze medal at Saturday’s final round. (PHOTO BY RYAN HORTON)

Monroe opened with a 3-1 win over Bixby’s Jack Puckett.

Stillwater’s state runner-up would take a 4-2 win over Monroe in the second round. The Yellowjacket would go on to beat Edmond Memorial’s Carsten Mower 6-5 to setup a rematch with Puckett for third.

In the final, Monroe beat the Bixby wrestler a second time. This time he secured a 1-0 decision good for a bronze.

“At 220 there were about five kids that could win it. They were all about one-point matches, and unfortunately, we happened to lose to a kid that we beat by one point last time,” said Coleman.

Seven other Jackets failed to make their way to medal rounds in the state’s largest competition field, Class 6A.

At 126 pounds Cale Walden was beat out by Owasso’s Easton Eicher, 8-4.

Holman was then beat out by Bixby’s 132-pound champion and Westmoore’s fourth place finisher.

Jackson Speer was eliminated by Sand Springs and Norman wrestlers at 145 pounds.

Nathan Harjo opened with a 12-11 decision over Tulsa Union’s Mikey Foster. The Stillwater state champ and a Bixby wrestler would eliminate Harjo from 152-pound medal rounds.

Zeke Coleman qualified at 182 pounds, but due to a lingering injury did not compete.

Coleman said this may have been Choctaw’s worst overall team showing at state in well over a decade, but he’s confident the Jackets can rebound and rebuild their powerhouse program moving forward.

“We had some guys wrestle really hard, and we had some others that need to do some soul searching this next year,” said Coleman. “We lose a lot of seniors this year, but we should be back in a few years.”

For more photos check out our ALBUM