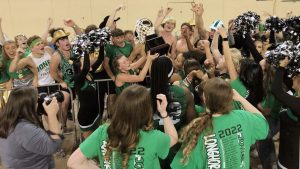 Jaelen Maples and Audrey Bain hoist the gold ball up high so the Jones student section can feel the 2022 Class 3A trophy, while teammates and Longhorn fans celebrate winning back-to-back state titles. (PHOTO BY RYAN HORTON)

Just a short time ago a Jones High School girls’ team had never made the postseason. A year after earning the school’s first girls’ state title, Jones went 3-0 again at the Class 3A State Basketball

The opening moments were stressful for Jones fans, but the final three quarters of play proved to be nothing but a celebration from the Jones side of the State Fair Arena.

Jones fell behind early thanks to Idabel’s 6-foot-6 center, Mary Carden, who won the opening tip and scored a turnaround layup within the first few seconds of play.

She then scored six of Idabel’s first eight points and fueled the Warriors to a 12-2 lead.

However, after a timeout the Lady Longhorns were focused and let their horns loose showing Idabel exactly why they’re the defending 3A state champs. 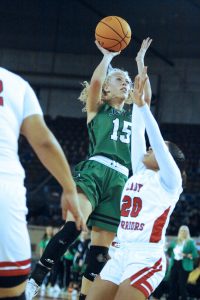 Zoe Tucker goes up over Idabel’s Mercades Lopez for a basket in the state final. (PHOTO BY RYAN HORTON)

Jones went on a 21-0 romp to take a sizable lead in the second quarter.

To the roar of Jones fans, Zoe Tucker and Boston Berry rallied the Lady Longhorns producing a combined 21 points in the first half.

The devastating surge put Idabel away early as Jones cruised to their second straight state title.

“They’re an excellent team, and hard to beat. They’re extremely athletic and have a 6-foot-6 girl in there to contend with,” said head coach Jenni Holbrook.
“We had to adjust. Sofi was just getting buried in there. She’s just so big, but once we adjusted, we were much more successful. Putting full court pressure on them, and playing man and not zone I think rattled them some.”

That nonstop pressure and what seemed to be endless cardio proved to propel Jones for a big win.

“They looked tired,” said Holbrook.
“We’re like, ‘we’re not tired,’ so just keep pushing it and it worked for us.”

By the end of the night Tucker and Berry each put in 19 points.
Jaelen Maples and Kasia Hansen each scored nine, while Sofi Woodson put up six points.
Audrey Bain scored two.

Karma Lewis would add one from the line late in the game, while the starters cheered from the sidelines for a second consecutive year.

“I’m just so proud of them. They’re a special group of girls. They’re willing to run through a wall for each other,” said Holbrook.
Idabel’s Carden finished the game with 13 points and nine rebounds. Mercades Lopez also scored 13 for Idabel, and their scoring was rounded out by Jaylee Lopez who had 11.
Jones won the championship without any seniors on the roster this season, will be looking for a three-peat next year.

“All year long we told the team ‘we’re not calling it back-to-back,’ because this is a completely different team. We don’t have the same people we had last year. We had to make a lot of changes and change our mentality on a lot of different things. Now we can say back-to-back, but all throughout this year we didn’t want to call it that. We knew it wasn’t going to be easy, and we weren’t going to go out and beat people by 40 like we did last year,” said Holbrook.

“I’m just so proud of them. It’s fun every year to see who different steps up, and I love that about coaching. I get every single one of them back next year.”

Cruising to the title

Ranked No. 10, Keys finished the year 21-6 as the Lady Longhorns rolled on to the state semifinal.

Avenging their only Class 3A loss of the year, third-ranked Jones dominated No. 2 Perry in the OSSAA state semifinal.

Jones blew by Perry early taking a 16-4 advantage in the first quarter.

Perry wouldn’t hit double digits until just before halftime, while the Lady Longhorns recorded double digits in each and every quarter.

With a 27-12 halftime advantage, Jones was set to cruise to their second consecutive state final appearance at the Big House.

Perry rallied late, but Jones managed to outscore the Maroons in the final two quarters as well.

The closest margin of the night was when Jones won the final quarter of play, 13-12.

Boston Berry led Jones with 18 points, while Kasia Hansen and Sofi Woodson each put up 11. 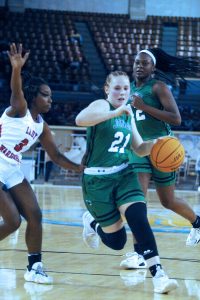 Boston Berry moves by the Idabel defense as Sofi Woodson looks on in the Class 3A State Championship. (PHOTO BY RYAN HORTON)

Jones took the 51-33 victory and focused on the following night’s state final matchup with Idabel.

Idabel entered the state final with a 26-2 record only dropping a pair of contests to Texas schools early in the season.

Idabel dominated No. 5 Bethel 60-46 in the quarterfinal and then managed to beat top-ranked Lincoln Christian with key plays in the final two minutes of play in the semifinal, 58=50.

The Lady Longhorns suspected they’d have their hands full with the Warriors.

However, the Lady Longhorns proved they were on a mission and handed Idabel a brutal 65-41 beatdown on the hardwood of the State Fair Arena.

With the win, the Jones girls’ basketball program became the school’s first program to win back-to-back titles in any sport

“There was a lot of people saying we couldn’t do it,” Tucker said. “But we pulled through just like we did last year and it feels real good.”

With every game, the scoring spread was well distributed with all the Lady Longhorns playing their part to win. The title game was no different, and by the fourth quarter the starters were sitting on the bench cheering on their teammates to a gold ball for the second straight year.

“I’m kind of in shock right now. Not that I didn’t think they could do it, but I’m just so proud of them. They give everything they have. They don’t take a single possession off; they don’t take days off and will do anything I ask them to do. They’re all unselfish and could care less who scores what. They’re a true team, and I think for this team to be able to do that they had to win it together,” said JHS head coach Jenni Holbrook.

“It’s a lot of time, a lot of work and it’s difficult. These girls lasted until the end and now they reap the benefits.”

“Overrated! Overrated! Overrated,” was a common chant from the rowdy Jones student section all season, and many argue that was for good reason.
Despite claiming the gold ball in 2021, the Jones Longhorns were ranked No. 3 in Class 3A going into the postseason.

To cap the regular season the third-ranked ladies from Jones High School beat No. 1 Lincoln Christian, and then in the state semifinal the Lady Longhorns absolutely dominated No. 2 Perry before claiming their second straight state title with a 65-41 thrashing of Idabel.

Perry was the only Class 3A team to beat Jones in the regular season, and they escaped with a one-point win in that first meeting.

At one point Jones led by 21 points as the Lady Longhorns cruised by Perry in the state semifinal with little resistance capturing a 51-33 win.
The only other losses this season came from Class 6A powerhouses Mustang and Putnam City North. Jones also gave away a four-point loss to Class 4A’s top-ranked and eventual state runner-up Tuttle.

Despite being the defending state champs, the Lady Longhorns seemed to fly under the radar for many in Class 3A. 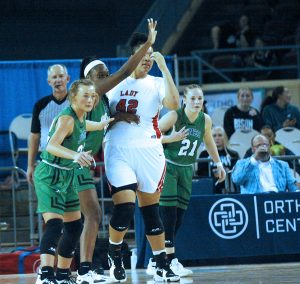 Coaches, players and fans throughout Oklahoma’s Class 3A took note when Jones marched straight to the Class 3A final with Idabel.

Anyone who doubted the Lady Longhorns going into Saturday’s final should have changed their tune after JHS absolutely clobbered the state runner-up, leading by as much as 26 points at times, all while sharing the ball and getting some backup players some quality court time at the Big House.

The Lady Longhorns have established themselves as an elite force in Class 3A, and are building on that legacy year after year.
Coaches Jenni Holbrook, Penni Young and Bridget Reynolds capped a golden season Saturday adding another golden ball to the JHS trophy case.

Jones coaches have taken a school without any prior female team postseason appearances and made three straight dominant playoff runs.

The Jones girls are undefeated in the state tournament, and this is the first Longhorn program to claim state titles back-to-back.

It’d be hard to convince the Lady Longhorn coaching staff they wouldn’t have won the title in 2020 as well, but the school’s first ever trip to the postseason was ended by tournament cancellation due to concerns regarding the COVID-19 pandemic.

Unlike this season’s “rebuilding year,” two years ago Jones was stacked with talented upperclassmen and were constantly taking wins by large margins.

“I 100 percent choose to believe that should be the case,” said Holbrook.

However, Jones will have to wait until next season to aim at officially securing a three-peat, and the Lady Longhorns are confident as the entire lineup will return since no seniors were on this year’s roster. 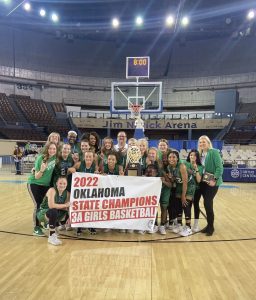 Photos from the STATE FINAL

Photos from the STATE SEMIFINAL