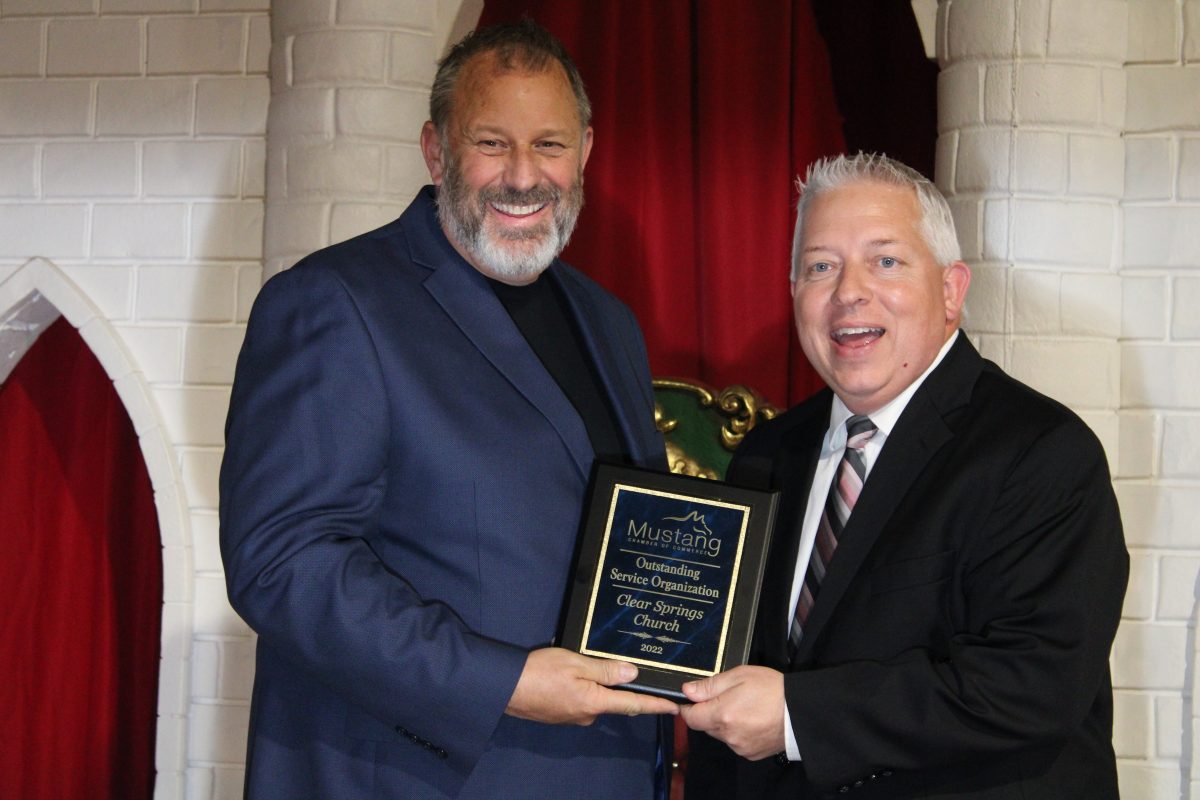 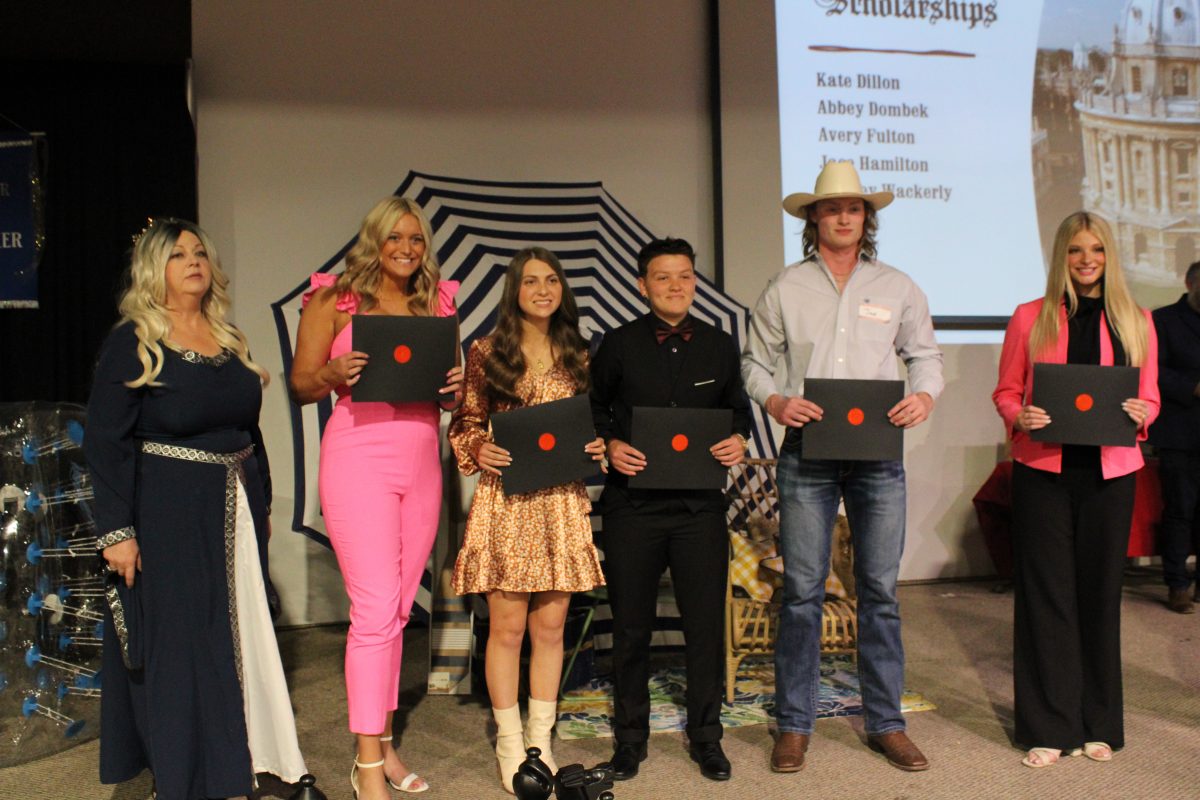 Scholarship recipients stand on stage after being presented with the honors at the banquet. 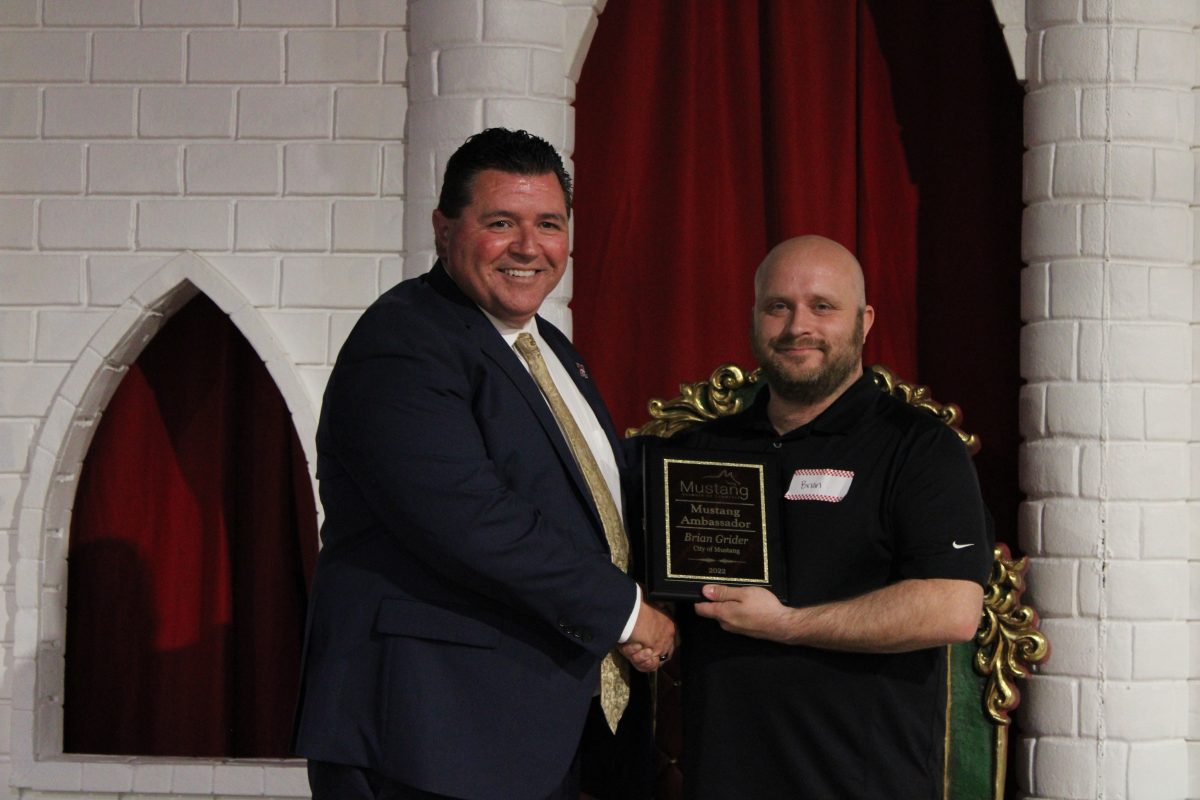 Charles Bradley awarding Brian Grider with the Ambassador of the Year award at the banquet. 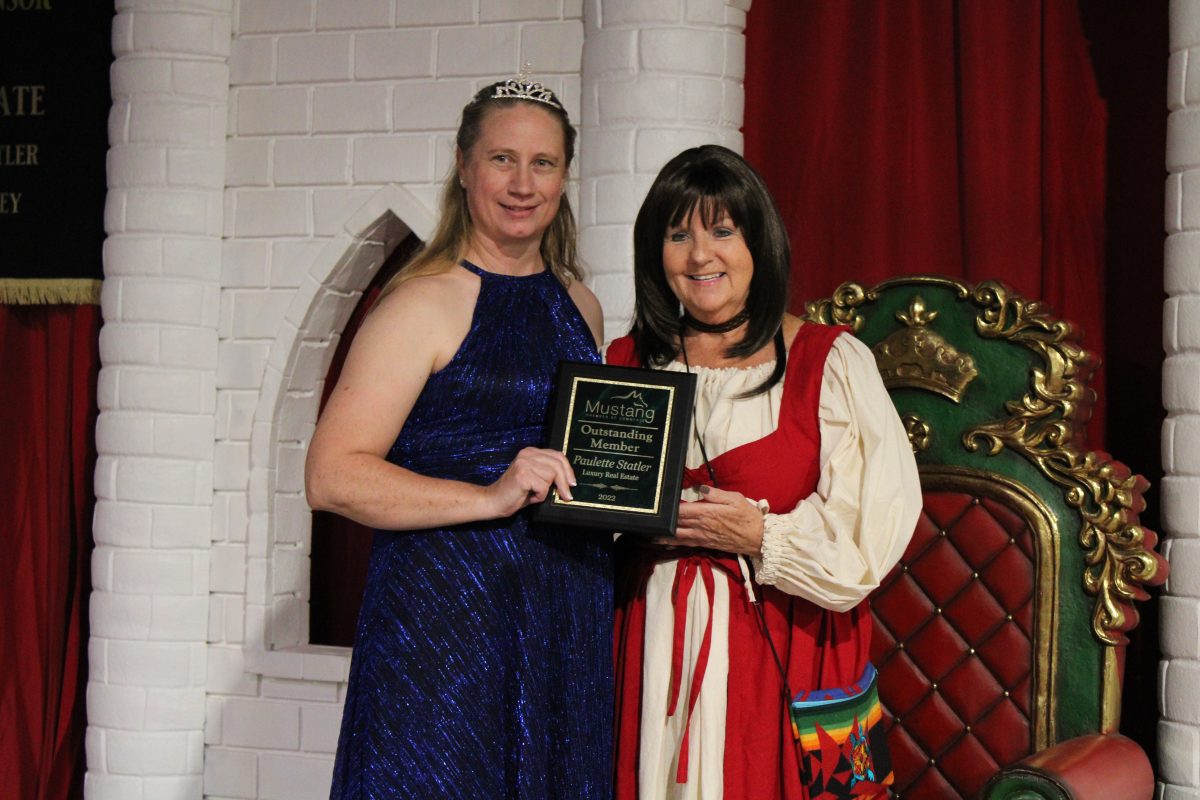 Paulette Statler being awarded Outstanding Chamber Member at the banquet. 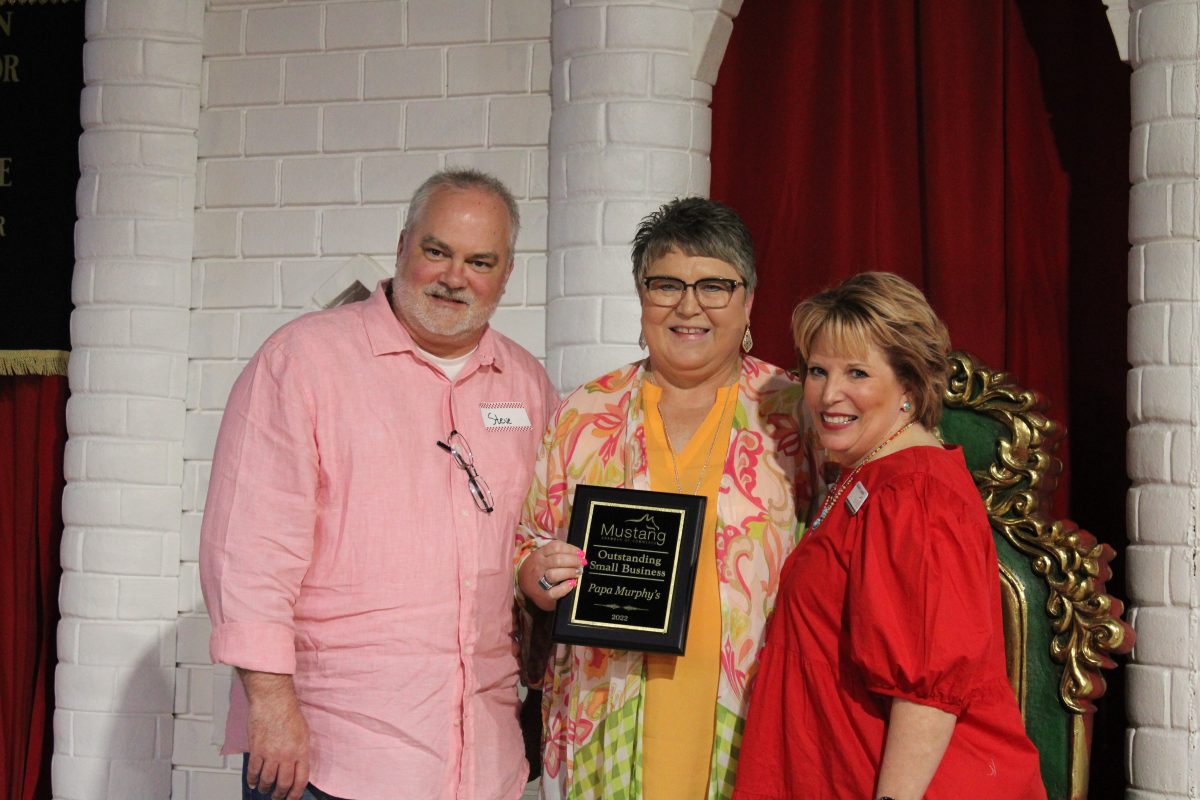 Michelle Landolt accepting Small Business of the Year awarded to her Papa Murphy’s in town. 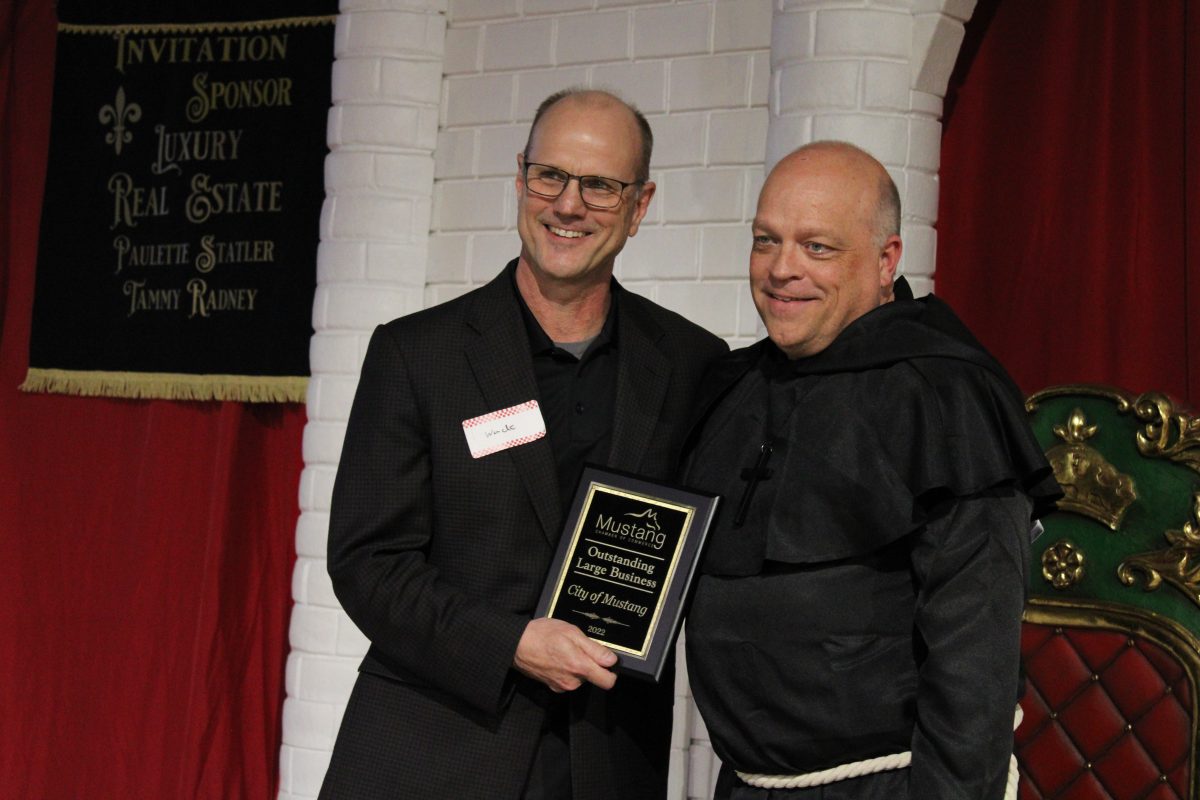 Tim Rooney accepting the Large Business of the Year Award as a representative for the City of Mustang.

Awards, scholarships and recognition of the good deeds done by Mustang residents became prevalent at the Chamber Banquet on April 28.

Speakers of notoriety within the Mustang Community and the Mustang Chamber presented the awards to the recipients in front of a sold-out crowd at The Venue at the Bridge.

The scholarships come directly from the funds the Chamber raised at the Crout Classic Fundraising Golf Tournament and the Legislative Breakfast.

The Chamber Board of Directors nominated and voted on the award. Grider received glowing remarks from many members of the community.

“On and on, people that I talked to, the sentiment was exactly the same,” Bradley said.

Bradley read a quote from Mustang City Manager Tim Rooney when presenting Grider with the honor.

“We could not ask for a better leader and ambassador for our community,” Rooney said.

The Bridge ambassador at the event then presented Clear Springs Church Pastor Jim Harris with the Outstanding Service Organization Award. Harris’ church helps the students in need by providing backpacks, clothing, haircuts and school supplies for them.

Over 500 families and 1,300 students benefitted from the ministry. Harris is the one who inspired other churches in the area to do similar ministries through providing for those in need.

Hicks said Statler likes to stay informed, citing her involvement around town at City Council meetings and as a Canadian County Precinct Chairperson.

Statler has lived in Italy for part of her life and has been selling Mustang for many years as a realtor. Statler received a standing ovation from the audience as she was recognized.

Statler thanked everyone and encouraged others to get involved.

“Get involved,” Statler said. “Get involved in your community. Your community is everything. We have a beautiful place here… This is the greatest place in the world to live in. So, let’s just promote it.”

DeBord recalled partnering with Landolt the first February Papa Murphy’s was open. The two businesses worked together, with a heart shaped pizza being sent out with every dozen rose’s sold. DeBord said the customers enjoyed the promotion.

Landolt, later in the meeting, would be announced as the incoming Board Chair for the Chamber. She will replace Harris in the role.

Wade Huckabay from Bancfirst presented the City of Mustang with the Large Business of the Year. Rooney accepted the honor on stage as the representative for the city.