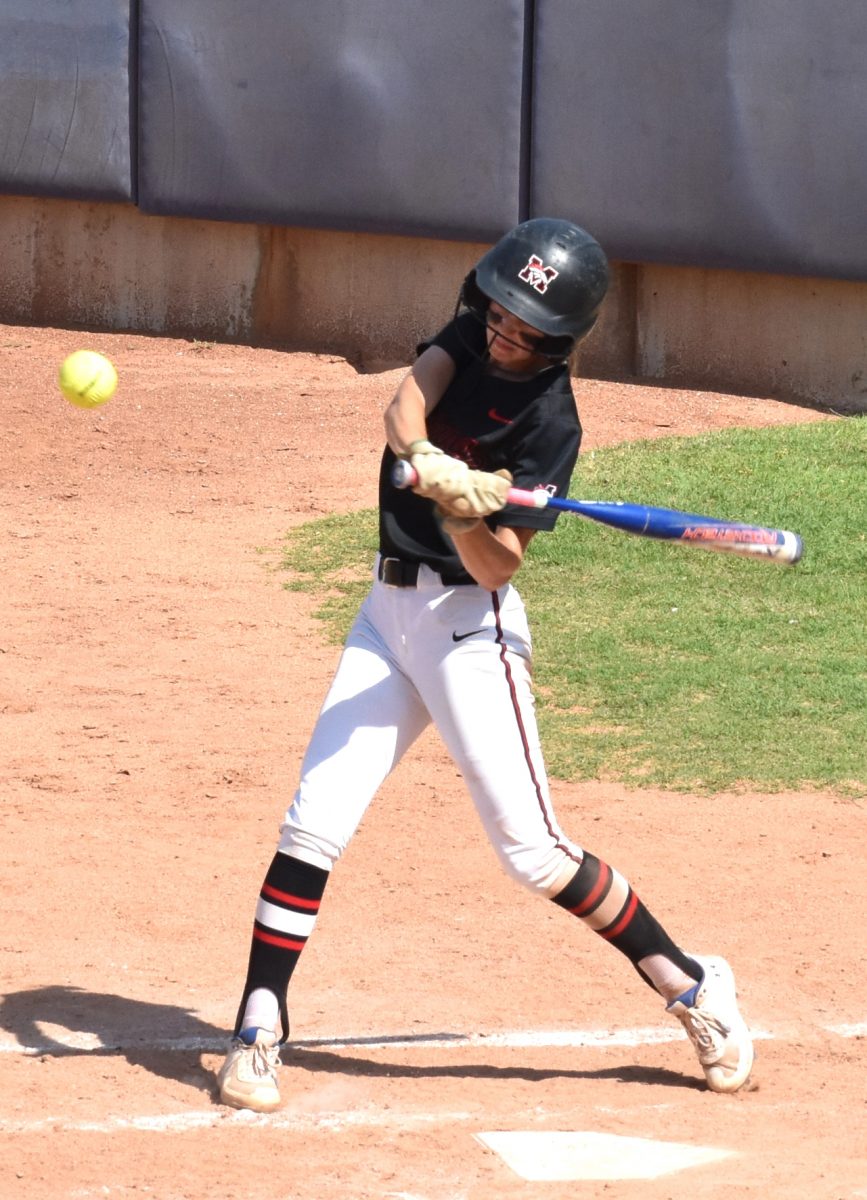 The Mustang softball team tried to defend their 6A Slowpitch Championship Monday at Hall of Fame Stadium in Oklahoma City.
Photo by Michael Kinney

One year after winning the Class 6A Slowpitch State Championship, Mustang was back at Hall of Fame Stadium looking to repeat. However, instead of coming in as one of the favorites to wear the crown, they carried the No. 8 seed and would have to take a difficult path to get back to the championship.

The Broncos kicked off the tournament facing No. 2 Broken Arrow. When the two teams faced off earlier in the season, it was the Tigers who won 12-2 at the Jenks Trojan Festival.
However, that was not to be the case this time around. Fighting blustery winds Mustang collected a 12-5 victory to advance into the semifinals.

Waiting in the semifinal round for Mustang was another familiar foe in No. 3 Choctaw. The Broncos and Yellowjackets battled three times during the regular season with Choctaw sweeping the series 59-9.

When the game started, it looked like the Yellowjackets were on their way to a route after scoring 13 runs in the first two innings.
Trailing 13-3 it didn’t look good for MHS.

But in the bottom of the second, Mustang loaded the bases for Kiera McGahee. The junior blasted a grand slam over the centerfield fence to close the gap to 13-7.
McGahee’s bomb seemed to spark the Broncos who went on to take a 17-14 lead going into the top of the fifth.

However, that would be the final highlight of the afternoon for Mustang. Broken Arrow scored 10 runs in the fifth and another seven in the top of the sixth to put the game into run-rule territory.
Mustang was unable to mount any offense in the final inning as Broken closed out the contest with a 31-17 win and advanced to the championship game.

The semifinal lasted just over two and a half hours and featured 27 walks.

“Both teams were battling the same inconsistencies throughout the game,” Mustang coach Lacy Darity said. “Obviously the wind was playing a factor for the pitches. The strike zone was difficult for both pitchers to find a groove. But I just think they started placing the ball where we weren’t. We knew they could do that. When you play Choctaw, it’s kind of death by a thousand papercuts.”

Despite the loss, Darity is proud of what the team accomplished. Mustang (16-14) came into the tournament as the No. 8 seed and fought their way to within a few innings of playing for a second straight title.

“I think we showed a lot of resolve the last three weeks,” Darity said. “The improvement that we made from three weeks ago to now. I think if you asked a lot of people if they expected us to be in the state semifinals after watching us the first month and a half of the season, they’d say no way. But they just kept fighting and kept getting better and got us back to this point.”