After some troublesome spring weather, Choctaw High School took to the field Monday with gold on their mind.

Choctaw’s slow pitch softball team entered the May 9 state tourney with a 10 a.m. game against No. 6-ranked Bixby at the USA Hall of Fame Stadium in Oklahoma City.

Bella Butler had a homer, and was credited four RBIs, while Molly Emerson had three hits and four RBIs.

Jaylynn Freer and Harper Grice each had two RBIs.

The win over Bixby advanced CHS to a 1 p.m. semifinal with No. 8 Mustang who had earlier bested second-ranked Broken Arrow.

The Lady Jackets blew by the Lady Broncos in dominant fashion, 31-18.

Choctaw moved to a final with top-ranked Southmoore that had taken wins over No. 10 Owasso and fourth-ranked Moore to open the tourney.

Southmoore put up three runs to open the first inning, but Choctaw immediately answered taking a 4-3 advantage after the first.

Southmoore put up four more in the top of the third off of an RBI by Riley Sharp and a 3-run play by Tallen Edwards to retake the lead, 7-4.

Butler responded by hitting her second homerun of the game to make it a 7-5 game after three.

Southmoore found their rhythm in the next inning hammering in seven unanswered runs to double up their score making it 14-5 going into the fifth inning.

This was the second time this season Sabercats took a 10-point win over Choctaw.

CHS took home silver in Class 6A, and went 26-8 on the year including four 1-point losses and a 2-point decision. 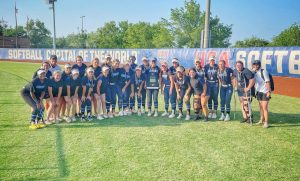 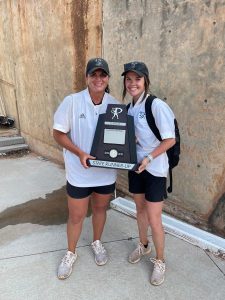 Choctaw High School secured a second-place finish at the Class 6A Slow Pitch State Championship May 9 at USA Hall of Fame Stadium in Oklahoma City.

The Lady Yellowjackets blasted No. 6 Bixby and No. 8 Mustang before the spring season came to an end with a loss to Southmoore in the state final.

Choctaw finished the year as state runner-up and 26-8 overall.

Seniors Lily West and Preslee Irwin were named to the All-State team.