OKC Broadway – A Nederlander, Civic Center Foundation, and Lyric Theater of Oklahoma Presentation recently announced the winners of the 2022 Kelli O’ Hara Award for Outstanding Performance by an Actress and Actor.

Mosshammer, a member of the CHS Class of 2022, earned a second chance for the honor and opportunity to be a finalist for Outstanding Performance by an Actress.

She has been performing and participating in theatre productions since she was 10. Her previous roles include: ensemble in Annie and Little Shop of Horrors, Dragon in Shrek the Musical, Margo in Bright Star, The Baker’s Wife in Into the Woods, and Mae Peterson in Bye Bye Birdie.

The recent Choctaw grad plans to attend the University of Oklahoma.

Her goal and passion have always been to leave smiles on a crowds’ face, no matter the size.

Mosshammer and Hatch were selected from among over 80 nominees representing 19 high schools in the western/central regions of Oklahoma. The pair will represent the state of Oklahoma at the National High School Musical Theater Awards, also known as the “Jimmy Awards,” in New York City next month.

The recent live ceremony was the first since precautions regarding the COVID-19 pandemic forced the event to go virtual in 2020.

The event was May 27 at Rose State College.

“We were so excited to bring these awards back live, and the show proved to be nothing less than magical. Rachael and Owen are the perfect pair to represent our region of Oklahoma and we can’t wait to see them shine on Broadway! We know that Oklahoma produces some of the best talent in the industry. It is our pleasure to showcase that talent on a national stage again this year,” said Elizabeth Gray, General Manager of OKC Broadway.

Hosted by Miss Oklahoma Volunteer, Michella Wilson, the event also featured a special video appearance from the award’s namesake, Oklahoma’s own Kelli O’Hara, and a featured performance by all the nominees.

At the ceremony 19 other students who, were not in a qualifying role in their school’s musical were honored with Spotlight awards for the ‘spark’ they brought to their particular role.

The Jimmy Awards® celebrates the brightest stars of high school musical theatre from around the United States. Regional winners are invited to New York for professional training and compete in a spectacular national awards program on a Broadway stage. The Kelli O’Hara Awards™, sponsored by Paycom, is an officially recognized regional awards program of the Jimmy Awards®. For more information about the Kelli O’Hara Awards program, visit okcbroadway.com/kellis. 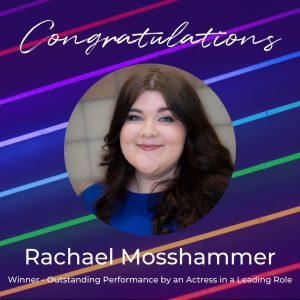 Not surprising, Mosshammer wasn’t the only Choctaw standout recognized in the ceremony.

“Such a fun evening celebrating Oklahoma high school musicals at the Kelli O’Hara Awards! I couldn’t be more proud of Choctaw’s three finalists for Best Actor and Best Actress in a Musical for their roles in Choctaw’s production of Bye Bye Birdie. Ben Bryant, Rachael Mosshammer and McKinley Rowton! All three gave stellar performance,” said Choctaw theatre director Maryjane Burton. “So cool to see last year’s winners including the beautiful Ryleigh Andrews hosting. She rocked it! Congratulations to Aubrey Hoag for being selected the recipient of the Spotlight Award two years in a row! And Congratulations to Rachael Mosshammer for winning Best Actress in a Musical for her role as Mae Peterson! Rachael will travel to NYC and work with the best directors, vocal coaches, and choreographers in the business! Then she will take the stage at the Nedarlander Theatre to perform live in the 2022 Jimmy Awards on June 27! So proud!” 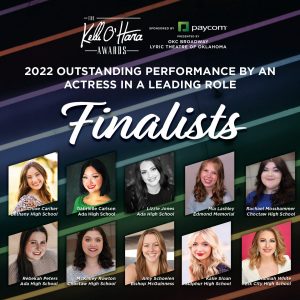 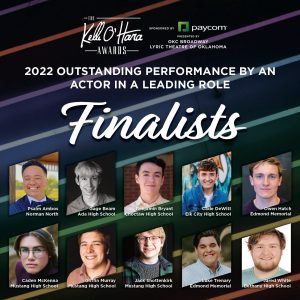