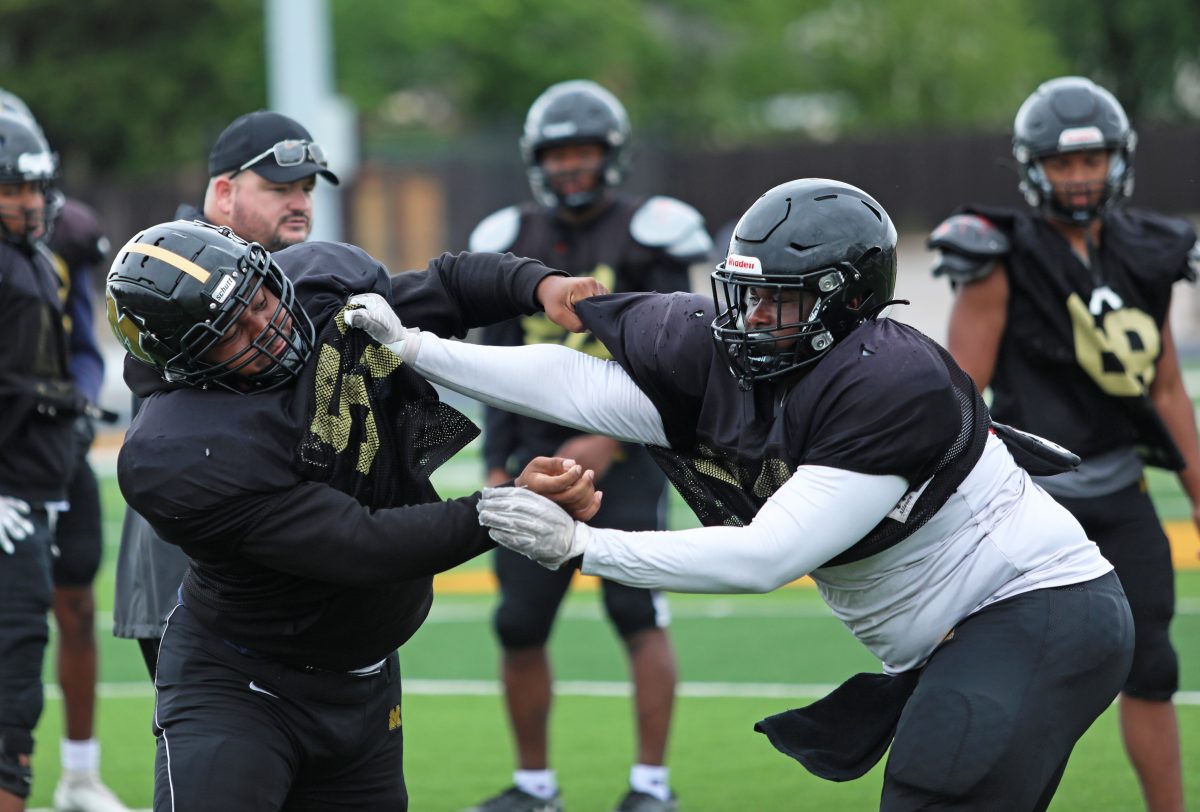 Midwest City’s Qualin Jones (Left) and Quintaveon Carter (Right) work on pass rushing drills during practice May 25 at Rose Field. The Bombers concluded their spring practices last week and will participate in the Bixby team camp this week. Photo by Jeff Harrison

Carl Albert and Del City held their final spring practices early in the week and took part in team camps on Thursday and Friday. Midwest City also rounded out their spring drills and traveled to Bixby for team camp earlier this week.

Carl Albert hosted a team camp with Putnam City and John Marshall on Thursday and Friday.

“I have a good group on my hands. They’re low maintenance and just show up and play hard and play physical,” Dunn said. “We’re able to coach football and not attitude or effort.”

Dunn said he opted for a smaller team camp to allow more time for coaching.

“I felt like we could slow it down and coach our kids more,” he said. “Sometimes when you have a lot of teams at the camp, you don’t really get to work with your kids much.”

Several of the Titans returning varsity players excelled at the camp. Quarterbacks Reed DeQuaise and Cash Harris both looked good and moved the ball down field to Tashawn James and Trey Washington.

Tanner Norman, Easton Collier, Brock Johnson, Trey Holland and Gary Ray held down the offensive line, while Xavier Robinson and Chancy Lester were a threat in the running game and on defense.

Linebacker Cody Longstreet was all over the field on defense, Dunn said.

Coach Robert Jones said his team entered this spring with a lot of unknowns after graduating a talented class that included Jayson Smith, Virgil Yates, Kyron Lindsey among others. The team also lost standout lineman David Stone, who moved to IMG Academy in Florida earlier this year.

“Anytime you lose players of that caliber you go into spring not knowing what you’ll have,” Jones said.
The loses weren’t limited to players. Defensive coordinator Nino Williams also stepped down before spring practices began. Jones will oversee the defense this season, a role he held several years before taking over the program in 2021.

But like in years past, Del City has plenty of young players ready to step up. Their defense shined at the Noble team camp as their varsity squad allowed only one touchdown during the two days.

“My questions were answered,” Jones said. “We got good play on the line and coverage on the back end.”

Offensively, the Eagles were able to move the ball through the air. George Gouldsby, Dkalen Godwin and D’Marion Turner took snaps at quarterback. Thomas showed his speed at receiver and reeled in five touchdowns. Sweet, Brown and Jessiah Burress also caught passes.

“We need to be able to throw the ball consistently, so we don’t get one-dimensional,” Jones said.

Learning was the key word at Midwest City’s spring practices.

“Spring is always about getting kids to come out and getting them to learn the game before we really get after it,” Hall said.

The Bombers lost several key starters from last year but will have a good mix of young and veteran players this fall. Midwest City has a small group of seniors and juniors, but a larger sophomore class.

“We have a good mix of seniors that are returning starters,” he said.

Offensively, the Bombers will run more of a spread attack that will highlight quarterback DeAngelo Irvin Jr.

“We want to give him more of a chance to be successful,” Hall said. “No one wants to go one-on-one against him.”

LaSiera Laviolette and Jaylon Woody will play running back for the Bombers.

The team traveled to the Bixby team camp on June 1-3. Bixby, McAlester, Sapulpa, Enid, Springdale Harbor (Arkansas) and Glenpool will also be there. 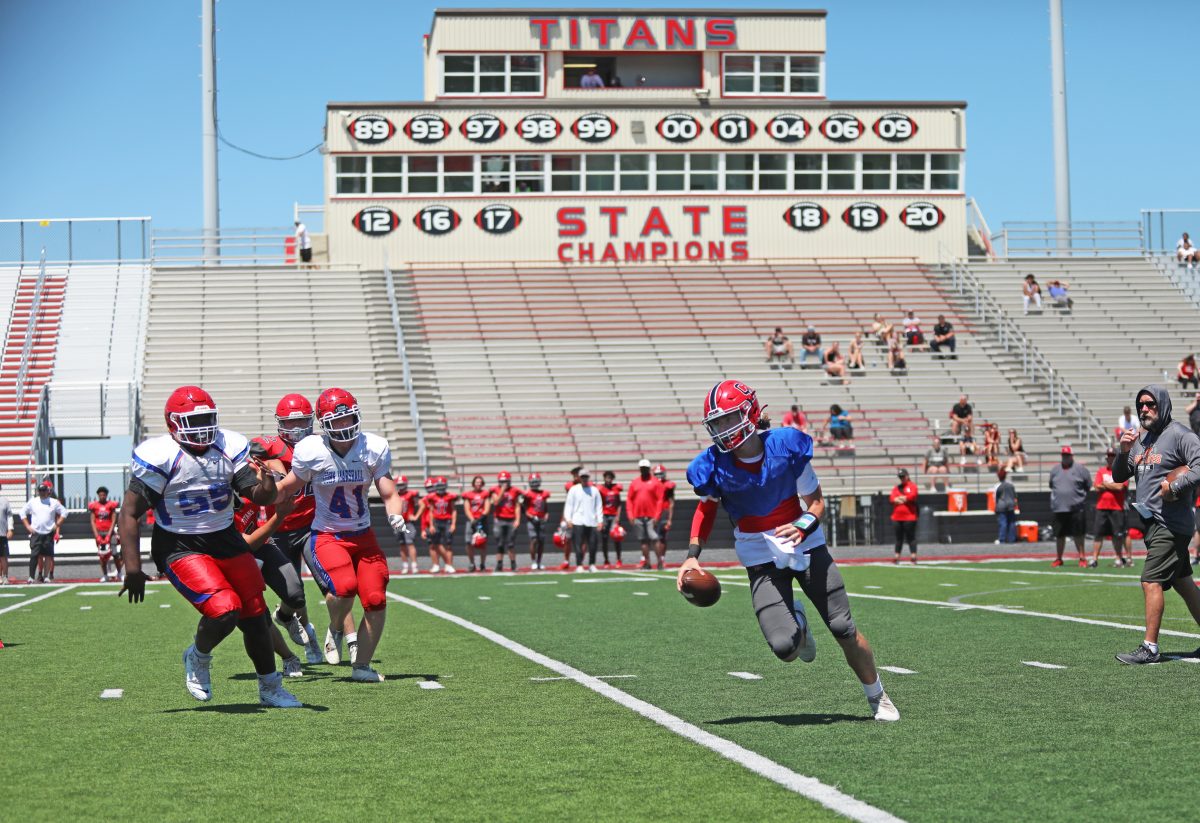 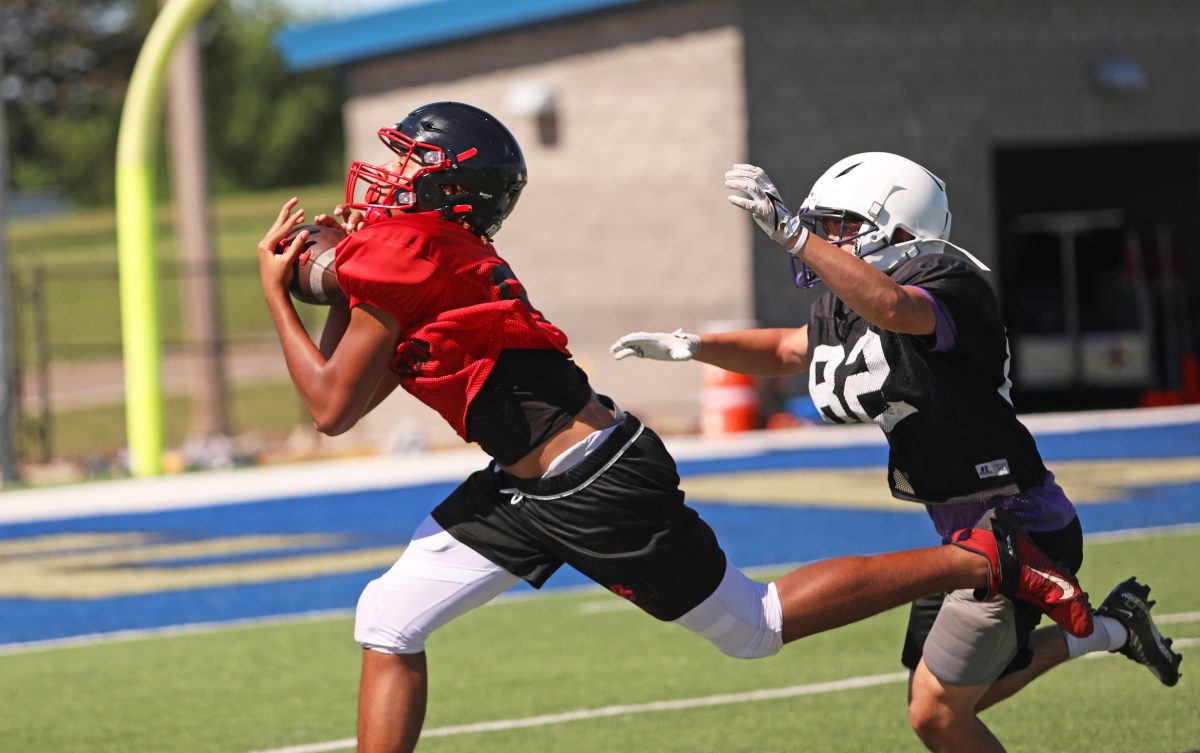