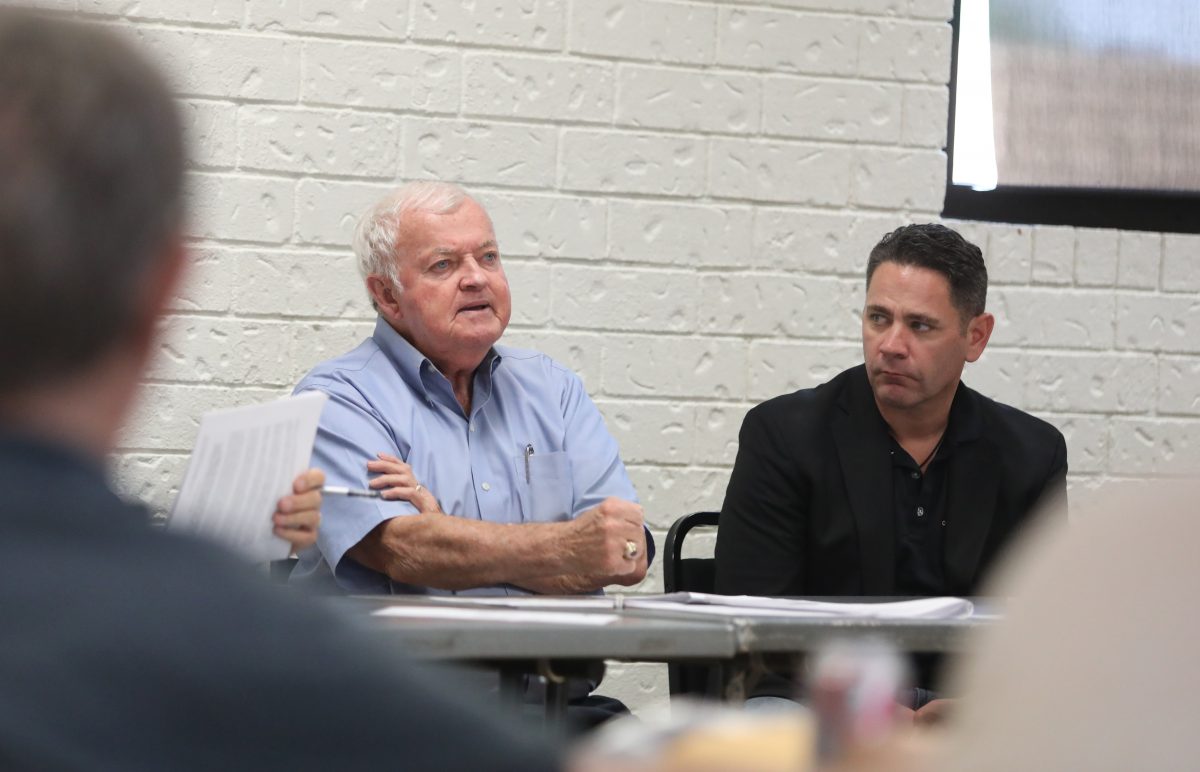 Oklahoma County Treasurer Butch Freeman (Left) speaks as Jason Constable (Right) and others listen during a meeting about a proposed TIF district on the north side of Midwest City. Photo by Jeff Harrison

Midwest City’s efforts at sparking economic development on the north side received a boost.

The city is looking to create a tax increment finance district that would help pay for about $8 million in economic incentives and infrastructure improvements to attract two industrial businesses to city-owned property.

The TIF district would allow any increases in property tax revenues to be set aside to fund infrastructure improvements in that area. The proposed boundaries primarily run along NE 23rd St. between Post Rd. and Air Depot Blvd. The west boundary extends north to NE 36th St.

Midwest City plans to fund the projects through its Economic Development Authority and with federal American Rescue Plan Act dollars. The city would be reimbursed for the EDA funds but not ARPA. The proposed TIF District would last for 12 years.

“The city will have to fund the money for most all of the projects and reimburse itself from the increment revenue when they come in,” said Dan McMahan, attorney for Midwest City.

On May 19, the committee held its fourth and final meeting which they reviewed the project plan and approved a resolution recommending adoption of the TIF district. The group determined that the private development will not occur without public improvements and development financing assistance.

Under the plan, taxing entities will continue to receive their current tax revenues. Only the increased tax revenues above the base level will be allocated for the TIF district.

Global Turbine Services and Centrillium Proteins, LLC, intend to open facilities within the North Side Improvement District. The companies would bring more than 400 jobs and at least $45 million in private investment.

Global Turbine Services is planning to build a facility in the Soldier Creek Industrial Park, 7450 NE 23rd St. The Florida-based company plans to build a jet engine maintenance, repair, overhaul, and testing facility that would employ up to 290 people with an average salary of $65,000. The development is expected to cost between $25 million to $60 million and will be completed over three phases.

The company plans to begin phase one construction in August and open by August 2024. Additional phases are planned to open in 2025 and 2027.

Centrilllium Proteins, LLC, a food processing company, is interested in a parcel on NE 36th St., west of Midwest Blvd. The start-up company would be staffed by industry veterans promising to construct a 55,000-square-foot building valued at over $20 million. The company expects to hire 150 employees with average wages of $52,000 annually.

The food processing company says it plans to invest $20-25 million in the project. They plan to begin construction in November and open in July 2024. Midwest City would help with extension of sewer, water and construction of a rail spur.

The city’s planning commission will review the recommendation to make sure it complies with zoning regulations. The city council will then consider it for final approval.