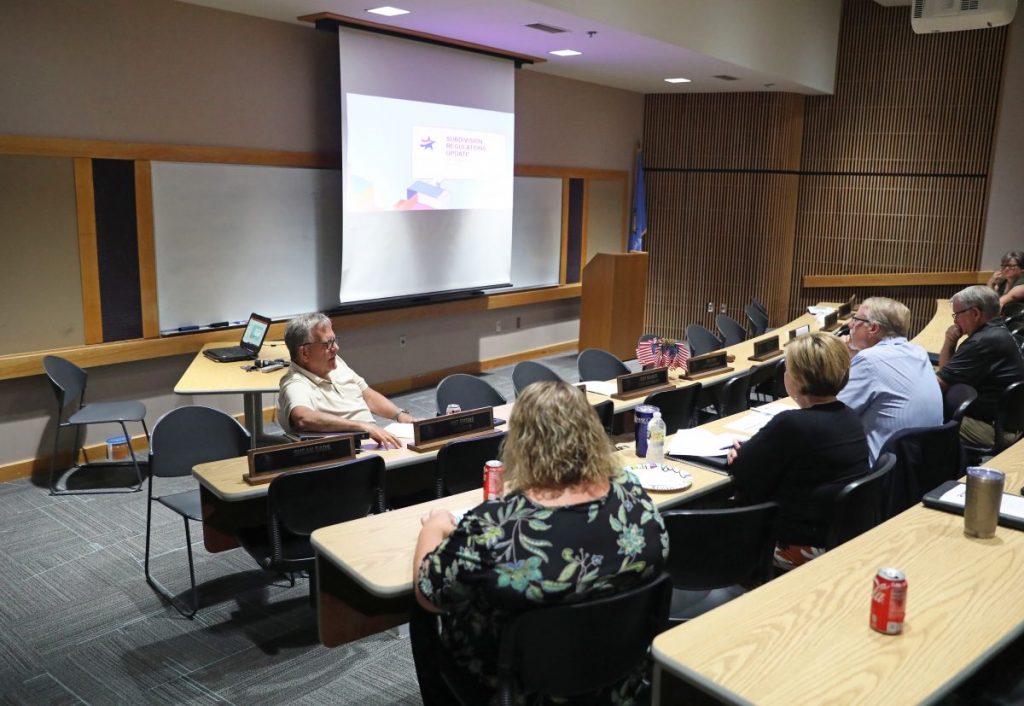 Midwest City leaders are looking to update regulations for subdivisions.

The city council last week reviewed proposed changes to the city’s platting process for subdivisions and required improvements to substandard roads and sidewalks. The proposal is designed to help alleviate growing pains associated with development of smaller acreages as well as provide additional resources and protections to the city.

The proposed changes would impact the process of subdividing or lot splitting small acreages to allow for additional residential development. That type of development has occurred over the past 30-40 years on the city’s east side as additional land has been annexed into city limits.

Developers are currently required to make half-street improvements and install sidewalks for new developments or make a payment in-lieu of the improvements. The city had historically granted waivers for these improvements, which often led to problems down the road.

Mark Zitzow with Johnson and Associates and city leaders presented proposed changes to the subdivision regulations during a special city council meeting on July 14.

“We think that we have come up with the fairest thing for not only the city and citizens but the developers,” Byrne said. “We don’t want to shut them out, but we don’t want them to be in a position to take advantage of us.”

Under the proposal, the city would eliminate major subdivision waivers for substandard roads and sidewalks. The city would establish new fees in-lieu for sidewalks and roads. The developer would have to pay 70% of the construction costs, and the city would pay the remaining 30%. The fees would be flat rates that are tied to inflation.

The fees would be paid by the person seeking the lot split and at the time of platting.
All funds collected will be used for transportation improvements throughout the city, including sidewalks. The funds may also be used to match funds for a transportation project, but not for operating or maintenance costs.

“If someone splits a lot, pays a fee for a sidewalk, that’s not a guarantee that sidewalk is going in front of those homes,” said Zitzow. “It means the city has discretion and can put sidewalks in where they think it is most needed. That may be on the arterial. It may be in the neighborhood.”

Byrne said they would also prevent “sidewalks to nowhere.”

Councilmembers Susan Eads and Sean Reed expressed concerns about the fees including when they would be collected and how they’d be used.

Eads believes the fees should be collected at the time the development occurs rather than upfront. And suggested seeking adding money from the developer if the project is delayed several years.

“If the developer waits to do the development and then we need to do work there we might be out more than 30% with inflation,” Eads said. “Why not give them five years to do it.”
Reed suggested adding a sunset clause on any of the plats.

Zitzow said he understands the concerns but said keeping track of each plat would be another burden for city staff, and could create confusion if the property is sold before any development occurs.

He also said it is uncertain how quickly the city would use the funds for any infrastructure projects.

Assistant City Manager Vaughn Sullivan said the additional funds could be used to address a number of infrastructure projects the city faces today.

Others questioned why the city would contribute any money towards the street and sidewalk improvements. Zitzow said they tried to strike a balance that would be acceptable to developers and the city. The proposed fees are middle of the road when compared to other municipalities.

“Edmond requires developers to pay the full amount, Oklahoma City takes a more liberal approach by making them pay an impact fee of about $1,500, so our proposed 70/30 split is where both sides felt comfortable,” Zitzow said.

Byrne said he originally had a hard-line approach and believed developers should pay the entire cost. His stance softened after hearing from city staff and developers.

“When we started, 70% was off the table for me,” Byrne said. “But the more I listened to the reasons the more I changed my mind. We don’t want to discourage development. And before we were giving away waivers, we got nothing for it.”

Billy Harless, community development director, thanked the committee members and Johnson and Associates for working to resolve the complicated issue. He also appreciated how they used real scenarios to show the impact of the proposals.

The presentation of the proposed changes did not require any action by the council at the meeting. The item is expected to move through the full public process with public notice, planning commission and the city council for review and adoption.