City officials say there’s hope for Harper Road and other city roadways falling into disrepair thanks to the purchase of an asphalt paver.

July 19 the Choctaw City Council approved the spending of $85,000 for the purchase of an asphalt paver from Warren CAT of Oklahoma City.

The funds needed for the purchase were approved in last year’s budget (Fiscal Year 2021-22).

The council unanimously approved the purchase of the preowned paver which has about 400 hours of use.

City officials say the new equipment will allow Choctaw to make lasting repairs to sections of roadway that have only seen temporary pothole patch jobs in recent years.

“With that we can pave lanes at a time. We can do a 15-foot-wide path with this, while currently we can only do 6-foot-wide. We’ll be able to tear out the old base, and do a four-inch overlay,” explained Public Works Director Randy Jacox. 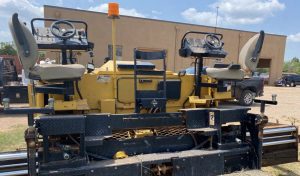 Choctaw City Council approved the spending of $85,000 for the purchase of an asphalt paver from Warren CAT of Oklahoma City at the July 19 regular meeting. The funds for the purchase were budgeted last year (FY 2021-22). (PHOTO PROVIDED)

With improved equipment, staffing remains a concern for the city’s public works department. However, city staff hopes to start making one or two major road repairs per month.

“Manpower is limited. If Randy had two more guys, he could have two crews,” city manager Brian Linley told the Choctaw City Council.

The department has a broad range of responsibilities ranging from mowing to repairing crucial infrastructure like roads and water lines.

“Warren CAT will come out and train everybody on the new equipment,” said Jacox. “If we’re getting calls about trimming trees and cleaning bar ditches that will pull our crew so we’ll have to alternate.”

Linley hopes to start seeing larger road repairs being made within the next month.

“Harper needs to get done before school starts. We need to try to fix some of the rough areas,” said Linley.

Harper has become a key thoroughfare in Choctaw as a primary bus route between Choctaw’s elementary and middle school campus and the state’s 23rd largest high school. The city’s premier park/playground and commercial district have also added to increased traffic counts on the rapidly deteriorating street.

As local drivers know, there are several other areas of roadway within the city limits that are reaching critical condition. City officials hope to start making noticeable improvements, addressing major pavement failures, in coming months.

“We have enough asphalt to last us until November if we do a couple bigger projects a month. Come November and December we won’t be using much asphalt with the colder weather, and we can come back in and look at numbers,” said Jacox.