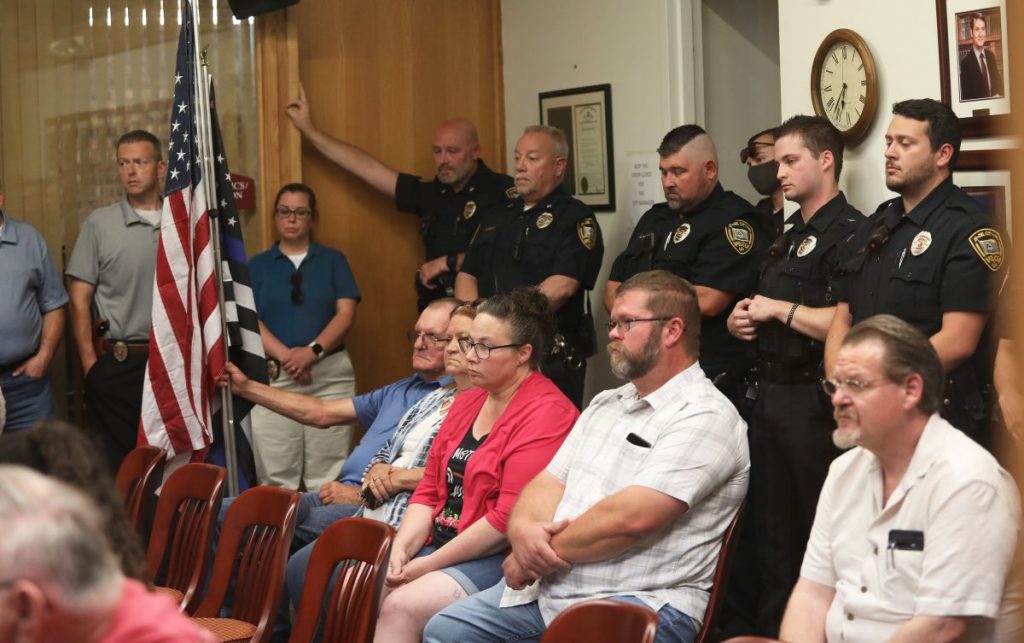 Del City residents and police officers listen as members of the city council discuss the Thin Blue Line flag that flies in front of the police station. Photo by Jeff Harrison

The flag, which has been at the police station for several years, is seen as a symbol of unity and support for police officers but also a sign of division for others.

City council members welcomed public feedback at the meeting as they continue to evaluate the future of the flag. Mayor Floyd Eason said they also plan to survey residents on the issue before deciding.

“We have to know what the majority of the people want before we can make a decision,” Eason said. “We’re not doing this off the top of our heads.”

No action was taken at the Aug. 4 special meeting. Eason said they expect to make a decision on the flag in about a month.

The flag features a single blue line on a black-and-white American flag and is inspired by the phrase “Thin Blue Line.” The history of the phrase dates to the 1800s and has been used in police circles in the U.S. since the 1950s. The flag emerged in 2014.

Residents, council members and police officers shared their thoughts on the Thin Blue Line flag and whether it should be allowed on city property.
A handful of residents opposed the flag saying it is divisive and violates flag codes.

“The flag ought to be a symbol of support for officers however it has become twisted,” he said.

Del City resident Walter Jacques said he served in the military and appreciates the police officers’ service. He said he understands the origins of the flag but says it has been hijacked by groups and used to intimidate others.

“I cannot imagine being a person of color living in Del City and seeing that flag flying over our police department because of its use by rogue groups,” he said.

“I appreciate the meaning of the flag, but it is an American Flag that has been marked up,” he said.

Claudia Browne, Del City resident, said she also thanks police for their support but believes the flag is divisive and sends the wrong message.

“Police officers should be welcome to fly that flag at home, but I do not believe it should be flying at a city building,” she said.

Eason said city attorney Beverly Palmer reviewed the issue and believes the flag is not illegal.

Deputy Chief Lloyd Berger appreciated the opportunity to discuss the issue with the public. He said the flag represents the role police play in standing up against violence and chaos.

“I see the flag as meant to bring unity between law enforcement and the citizens they serve, all one nation under God, with everyone created equal,” Berger said.

Greg Childers, of Del City, said the flag is a symbol of unity between the community and the people they hire to serve and protect. He said people need to spend more time building up the community rather than worrying about the Thin Blue Line flag.

“It’s offensive to me that one or two people can come up and try to change and guide an entire population because a small group of people are offended,” he said. “…I’m stunned we’re even having this conversation.”

Councilman Michael Dean said police handle of many of society’s ills and problems daily and are subject to constant criticism.

“I’m so thankful that they have answered the call and that’s why I and I believe our city respects them enough to keep the Thin Blue Line flag,” he said.

Several other residents spoke in support of the police officers and the Thin Blue Line flag.

Councilman Kyle Gandy said he pushed for a conversation out of respect for police officers and residents.

“I’m glad we’re having this conversation I think it was something that was coming whether we wanted it or not,” Gandy said. “Whatever the decision is made by this council, you are respected and loved. And everyone on this council is very appreciative of the sacrifices that you make.” 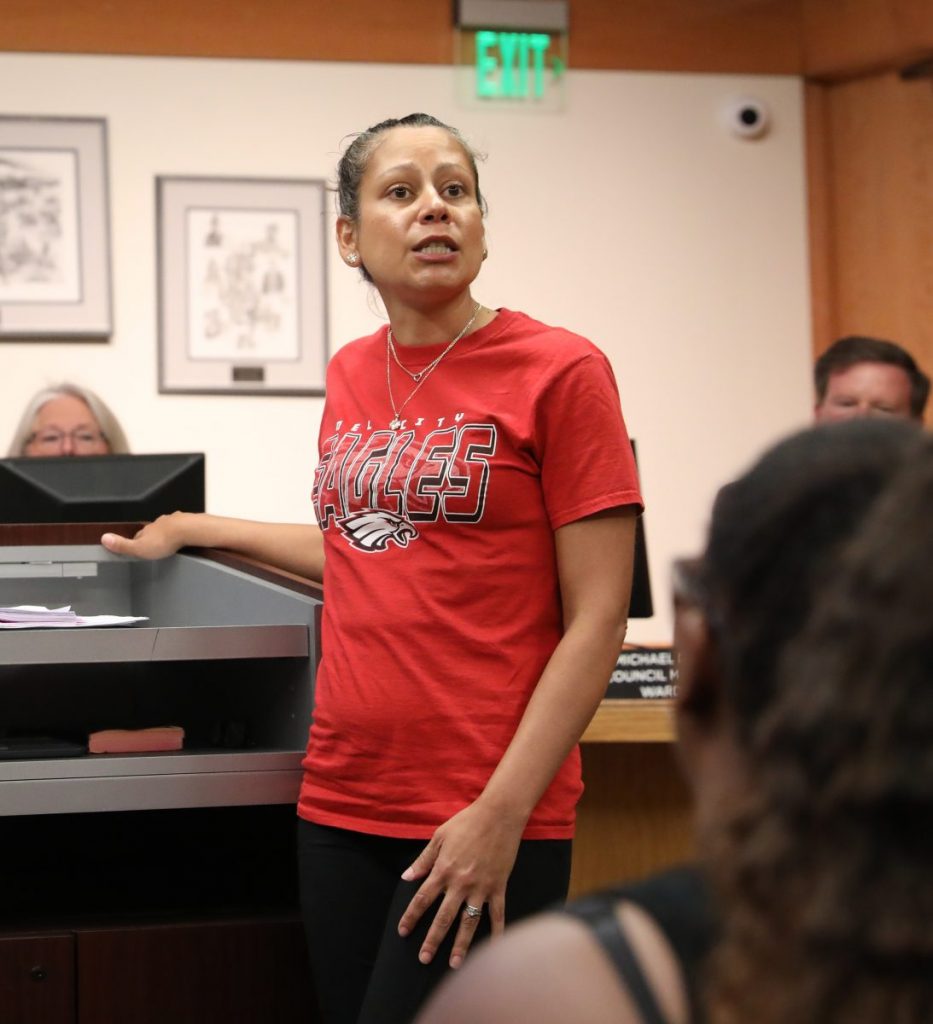 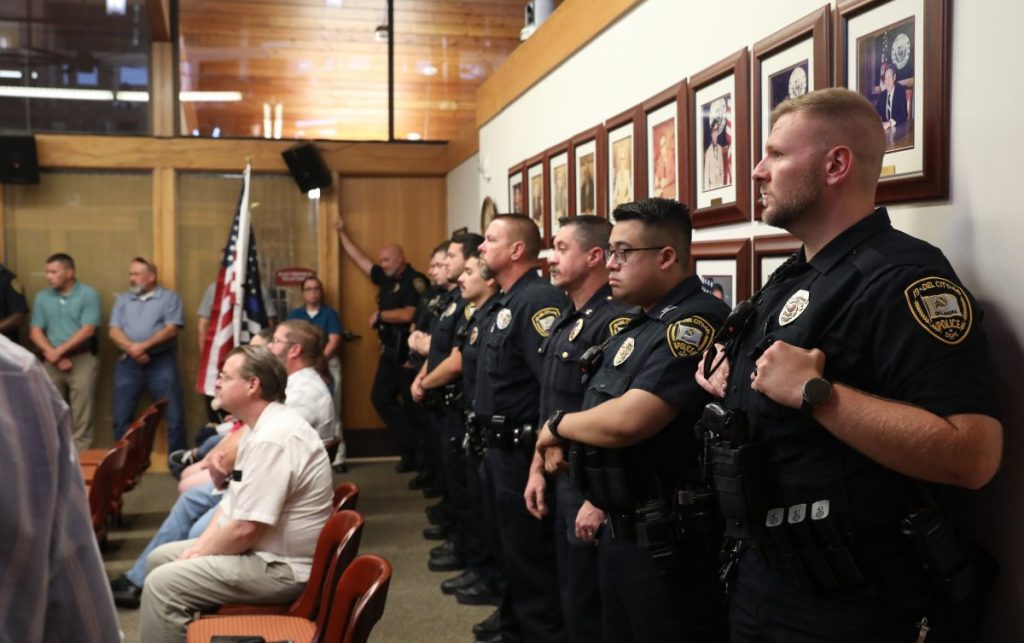 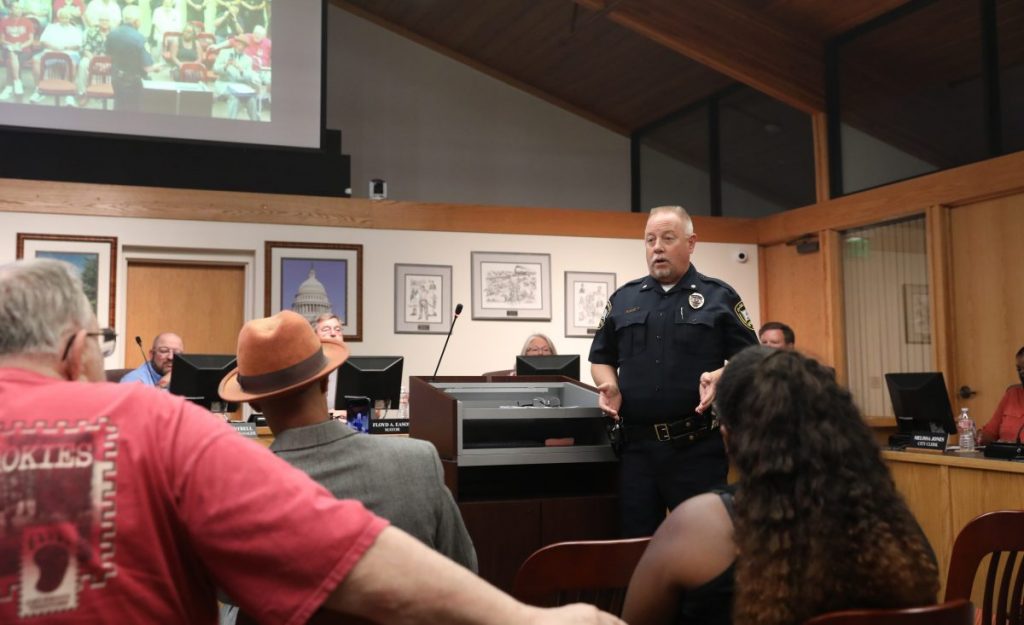 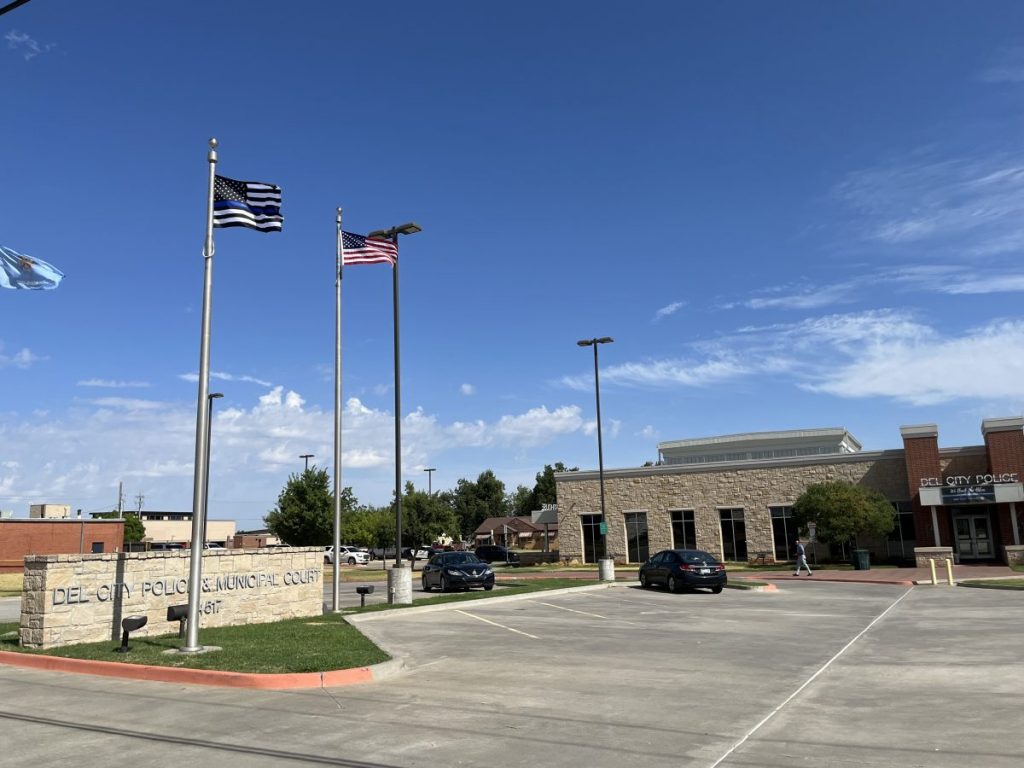