A Choctaw resident recently met with state officials to celebrate a new law named in her honor meant to better inform parents about services to help children with chromosomal disorders.

When bills are approved by both chambers of the Oklahoma Legislature, there’s a specific time frame for them to be acted on after being sent to the governor’s office. Ceremonial signings give the governor, legislators, and supporters of the new legislation an opportunity to celebrate the bill becoming law.

Authored by Sen. Stanley, Senate Bill 1203 was passed in the second session of the 58th Legislature. 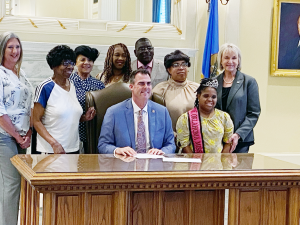 Courtney’s Law, which she, her family, and other supporters advocated, directs every health care facility, health care provider, or genetic counselor who renders prenatal care, postnatal care, or genetic counseling to refer expectant parents to information published on the State Health Department’s website if the parents receive a positive test result from a genetic test for a chromosomal disorder.

“Under this new law, if parents receive a positive test result on a chromosomal disorder, they will receive accurate information about that condition as well as information for programs and support services. Having this information as early as possible can help parents line up support services, treatment and other therapies in order to help their child develop their full potential,” said Stanley. “I was thrilled to have Courtney and her family there to participate in this ceremony.” 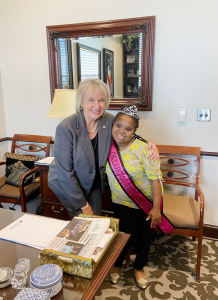